This is what happens when you play the national championship in Indianapolis. Nobody is accustomed to this behavior from Georgia fans and they make our fine law enforcement officers come to a steakhouse because some adults are barking. Anyone from the South could have told you they'd be doing that.

While this behavior is still incredibly abnormal, it is quite amusing to me that it's happening up North where people are taken aback by it. This is just one of those things in the SEC you accept as normal and forget how weird it actually is. And they're not just going through the motions, either. Look at the woman on the very far left of the video standing up. She is absolutely getting after it. 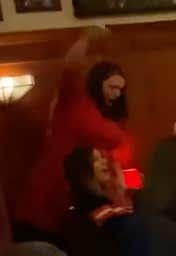 God help us if these people actually win a national title for the first time in four decades. This is how insufferable they are when they haven't been on top since the Jimmy Carter administration. We can't let them have this.

Also, imagine being on a flight from Atlanta to Indianapolis this weekend for whatever reason and not knowing anything about college football? I imagine you'd be a bit confused.

While I still don't understand this particular behavior, it is a good reminder why we need to keep the national championship in the South. Rotate it between Miami, Tampa, Atlanta and New Orleans and call it a day. Maybe play one in Vegas or Los Angeles for shits and giggles. But these yankees just don't get it.