Throughout the week everyone talked about the possibility of a kneel-down game between the chargers and raiders if by the crazy chance the Colts were to lose to the Jaguars.

The thing is... even though mathematically they both get in and get a bye with a tie, they both will not do the kneel down due to an old phenomenon called game theory.

Game theory is basically why the world hasn't turned into a nuclear wasteland. It is the reason the USSR and USA never got into actual war. Its concept is pretty nerdy but I kinda got into it when I realized it applied to war and competing.

See the prisoner's dilemma isn't a complete parallel but ill try to explain it the best I can.

Basically, a pair of criminals get arrested and placed in two separate cells. They are both given the same ultimatum. Rat on your buddy who stays silent and you go scotch-free (0 years), if he also rats on you, you both get serious jail time(5 years each). If both don’t snitch they get minimum punishment (1 year). If one doesn't snitch and gets snitched on the one who stayed silent gets super major serious jail time(20 years).

In the experiment, it is determined best thing to do if you are a prisoner is to snitch because you defend yourself from getting caught out with serious jail time. the average of the two outcomes if you snitch is (0+5)/2= 2.5 years. The average outcome if you stay silent is (1+20)/2= 10.5 years. Though this does not take exact statistics and the probability of your partner snitching into account, it is the best bet to just snitch.

How this applies to the game. 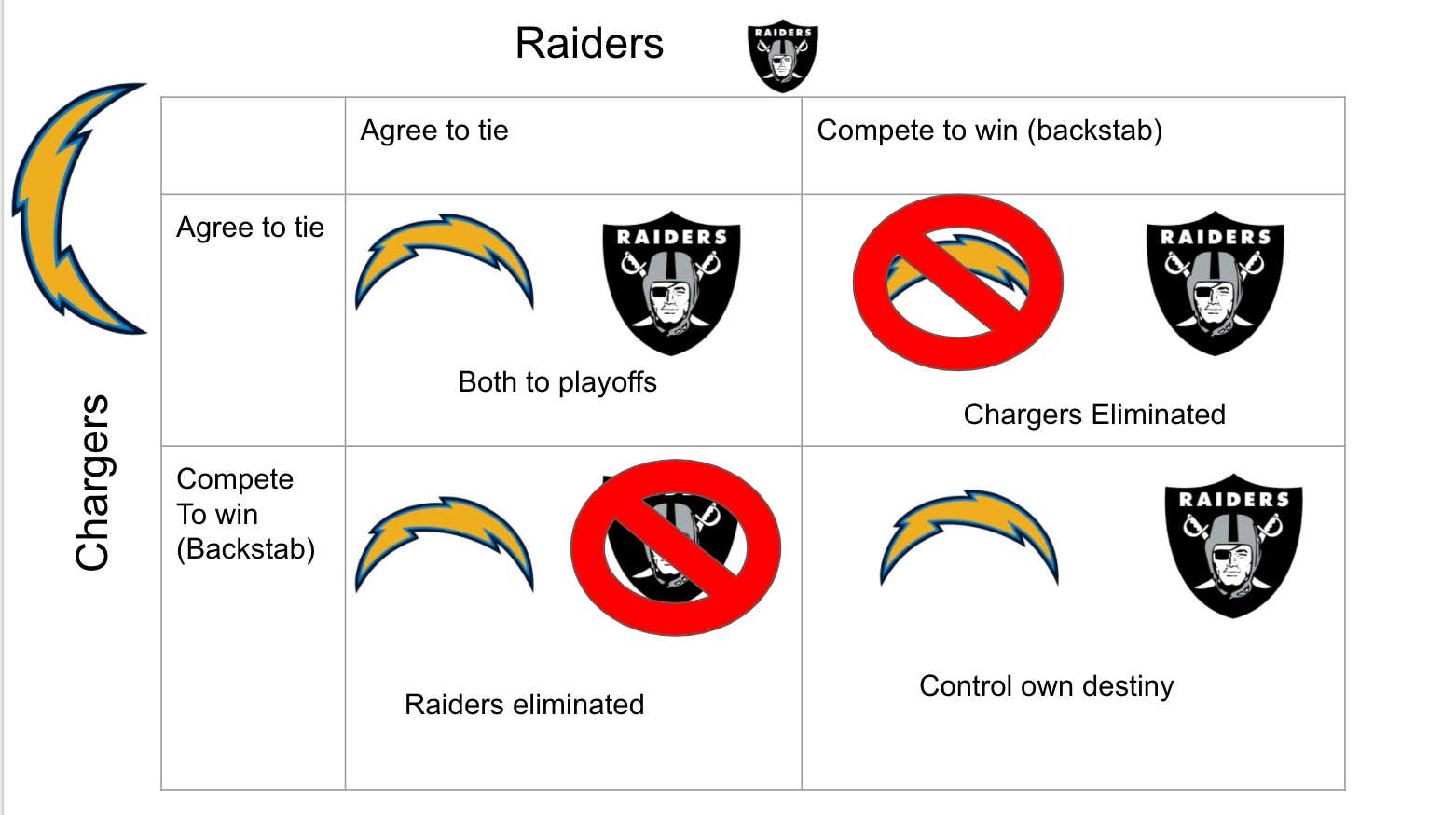 If both teams agree to tie and kneel, they both make the playoffs. If one team sometime throughout the game decides to stop kneeling and try to compete to win, the other team would get caught off guard and they both would end up playing to win anyway.

If they both compete they both have a chance to make the playoffs as well as a natural tie.

Though it is way more complicated in a football game with multiple choices, let's say both teams kneel the ball all the way to the end of the 4th quarter and one team fakes a kneel and tries to score. The variability and risk for one coach to trust another coach to kneel it all game just like they are way too risky. There is the chance they inevitably end in a tie naturally which if you averaged which outcomes would have the highest probability of playoffs, competing to win has the best outcomes.

To answer this question, the incentive is not getting screwed over and making the playoffs rather than an added benefit.

Also, this guy makes a great point that could be factored in.

Also apparently there is a rule that Rodger Goodell can give both teams losses if neither team tries. (Big Cat told me this).

Unfortunately, even if the tie bowl was possible neither team would want to do it.