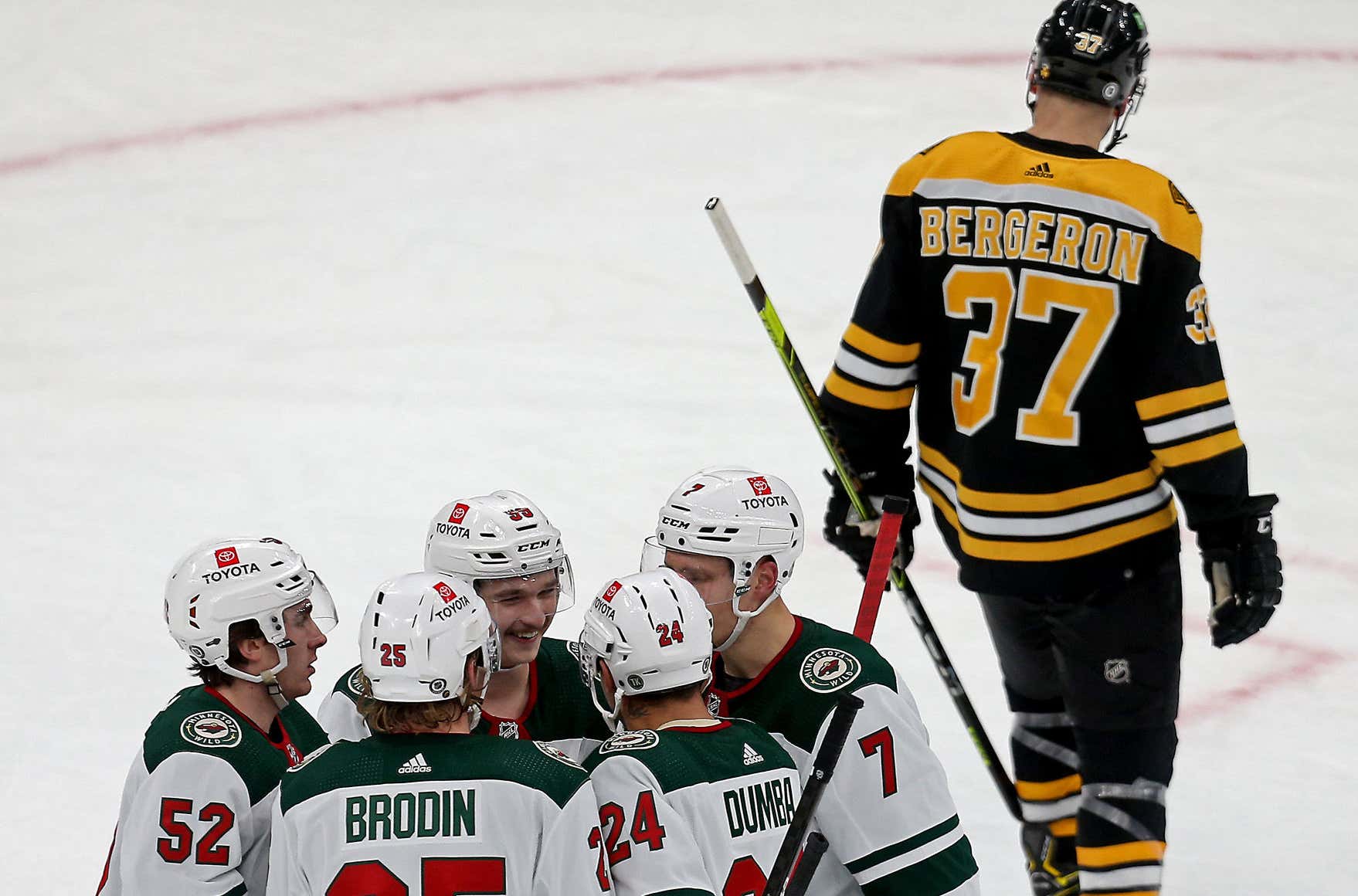 The Minnesota Wild have ended the Boston Bruins' 3 game win streak with a 3-2 win at TD Garden. Let's get into it.

Taylor Hall opened the scoring while the B's were on a 4 on 3!!! penalty. B's couldn't convert the 5 on 3, Bergeron took a tripping penalty but Hall gets the goal on the man advantage. 1-0 Bruins.

Kirill Karpizov tied the game on the Minnesota Wild's own 5 on 3 (Marchand and Carlo in the box). 1-1.

Jonas Brodin's shot was redirected off Nico Sturm, Wild take the lead on the PP. 2-1.

Matt Boldy scored his 1st NHL goal just as their PP expired (Frederic in the box for boarding), 3-1 Wild.

B's come out with some jump in the 3rd but can't pot the tying goal.

- No Charlie McAvoy tonight for the B's, he's been dealing with a lingering lower body injury but they don't believe it's anything long term. John Moore slotted in. Think tonight really highlighted how important of a player McAvoy is for them (duh). Cassidy noted that McAvoy should be traveling to play Tampa on Saturday.

- Tomas Nosek was added to the COVID list and missed tonight's game. Sucks because the 4th line played so well against the Devils. Anton Blidh took his spot.

- Nice to see the B's break through on the PP finally. 7th of the year for Taylor Hall who is starting to heat up. He was flying out there tonight. B's ended up going 2/5 during a nutty game with a ton of penalties.

- Trent Frederic dropped the gloves with Dmitry Kulikov after a not so great hit on Kirill Kaprizov. Kaprizov would not return. Kaprizov was in a tough spot and Frederic didn't let up. Kaprizov is a treat to watch, hope it's nothing serious.

- Frederic fought a 2nd time tonight, this time in the 3rd against Marcus Foligno. He was more than happy to answer the bell.

- Absolute ref show tonight. Penalties GALORE. I think B's had 21 PIMs midway through the game. Crazy. Ended up having to kill 8 penalties. Not exactly a recipe for success.

- Game winner tonight goes to Matt Boldy, former BC player and Mass native scoring his 1st goal in his first game. Great story, just wish it wasn't against the B's.

- First game for the B's on ESPN, I'd give the broadcast a C+. Camera angles absolutely brutal in this one at one point. I liked the segment where they cut their audio and let you just listen to the game as if you're there, that should be an option on ESPN+.

Entertaining game, thought B's deserved a bit better but a good battle. High energy. Wasn't expecting these two teams to start to develop some bad blood. B's gotta lick their wounds and get ready to play Tampa on Saturday night.

Also an update on the Tuukka Rask PTO situation: both of Providence's games this weekend against Lehigh Valley have been canceled due to COVID. Bruce Cassidy is not sure what will happen next, but doubts he will travel with the team this weekend.