Last night, as The Lucha Bros and Jurassic Express were putting on a banger of a main event to cap off the first AEW Dynamite show of this new era on TBS, it appeared we watched a horrific injury take place.

Luchasaurus (a dinosaur) chokeslammed Rey Fenix to the outside - through a table - and his arm bent in the complete opposite direction it was supposed to at the elbow. It almost made me puke.

One of the only things I've seen that looked worse in the middle of a match was uh - well, this….

Immediately, he called for the ringside doctor, and I thought, "Well, fuck! Arm's broken. Fenix is gonna be out of action for a while!"

The Lucha Bros are on the run of their career right now, and I thought about how much it sucked that we would see it cut short due to injury for quite a bit last night.

Fenix came out today, however, and said he broke ZERO bones in that match….

I believe the thought is that he dislocated his elbow badly - but the fact that he didn't even have bones popping outta his skin at this point is a pure miracle…. 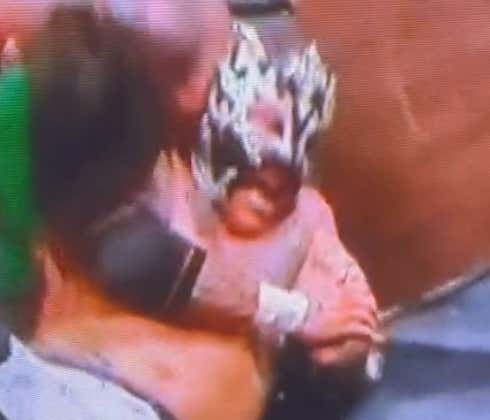 ….the fact that he didn't break anything is the work of something supernatural. He may just be the Wolverine.

P.S. Jungle Boy (Luke Perry's son) looking up at the sky after the win tugged on all the heartstrings last night….

Double P.S. I had a great interview with Liv Morgan today - check it out….