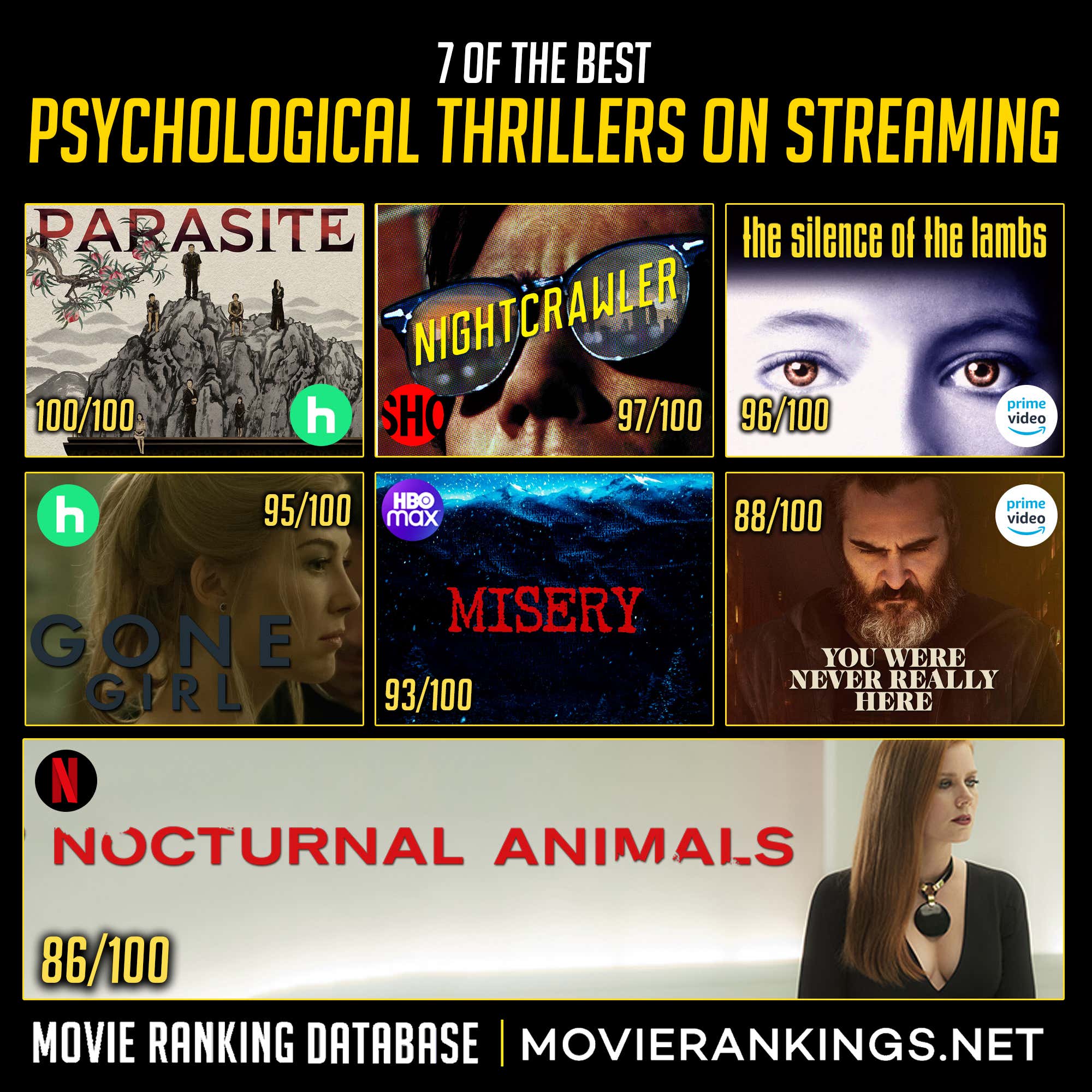 All unemployed, Ki-taek's family takes peculiar interest in the wealthy and glamorous Parks for their livelihood until they get entangled in an unexpected incident.

One of my favorite movies of the last decade. I fucking hate how often the word "masterpiece" gets thrown around in the movie world because it devalues movies that actually deserve the title like this one. Perfect on every single level and a must-watch in my opinion.

When Lou Bloom, desperate for work, muscles into the world of L.A. crime journalism, he blurs the line between observer and participant to become the star of his own story. Aiding him in his effort is Nina, a TV-news veteran.

Jake G is basically the Michael Jordan of psychological thrillers and dramas. This movie, 'Nocturnal Animals', 'Zodiac', 'Prisoners', 'Enemy' and more. He has crushed all of them and this is no exception. He delivers such a fucking weirdo performance that will keep you on your toes the whole time.

Clarice Starling is a top student at the FBI's training academy. Jack Crawford wants Clarice to interview Dr. Hannibal Lecter, a brilliant psychiatrist who is also a violent psychopath, serving life behind bars for various acts of murder and cannibalism. Crawford believes that Lecter may have insight into a case and that Starling, as an attractive young woman, may be just the bait to draw him out.

I recommended this movie with the police/detective genre blog as well and I have no problem doing it again. It's one of the most iconic thrillers of all time and features one of the best villain performances of all time from Anthony Hopkins.

With his wife's disappearance having become the focus of an intense media circus, a man sees the spotlight turned on him when it's suspected that he may not be innocent.

Speaking of all-time villain roles, Rosemund Pike delivers one of the most hateable performances of all time in this movie. Like with most David Fincher joints, this one has a ton of twists and turns and keeps you on your toes right until the very end.

Novelist Paul Sheldon crashes his car on a snowy Colorado road. He is found by Annie Wilkes, the "number one fan" of Paul's heroine Misery Chastaine. Annie is also somewhat unstable, and Paul finds himself crippled, drugged and at her mercy.

To me, this is the 4th best Stephen King adaptation behind 'The Shawshank Redemption', 'The Shining' and 'Carrie'. Caan is solid, but Kathy Bates has one of the best performances I have ever seen an actress give.

A traumatised veteran, unafraid of violence, tracks down missing girls for a living. When a job spins out of control, Joe's nightmares overtake him as a conspiracy is uncovered leading to what may be his death trip or his awakening.

I always find a reason to tell people to watch this movie because it's one of the best Joaquin Phoenix performances in the last decade. It's got some similar vibes to 'Taxi Driver' but somehow darker and more brutal.

Susan Morrow receives a book manuscript from her ex-husband – a man she left 20 years earlier – asking for her opinion of his writing. As she reads, she is drawn into the fictional life of Tony Hastings, a mathematics professor whose family vacation turns violent.

This is a movie I like rewatching because there are so many little things that you just miss in the beginning of the movie that foreshadow how the movie is going to end. Jake G and Amy Adams both crush it, and their performances are worth the price of admission alone.