Usually the last week of the NFL regular season is slow in the sports blogging business since there isn't much to talk about outside of a bunch of playoff scenarios that involve ties happening and a bunch of other weird shit. But thanks to Antonio Brown, business is BOOMIN. 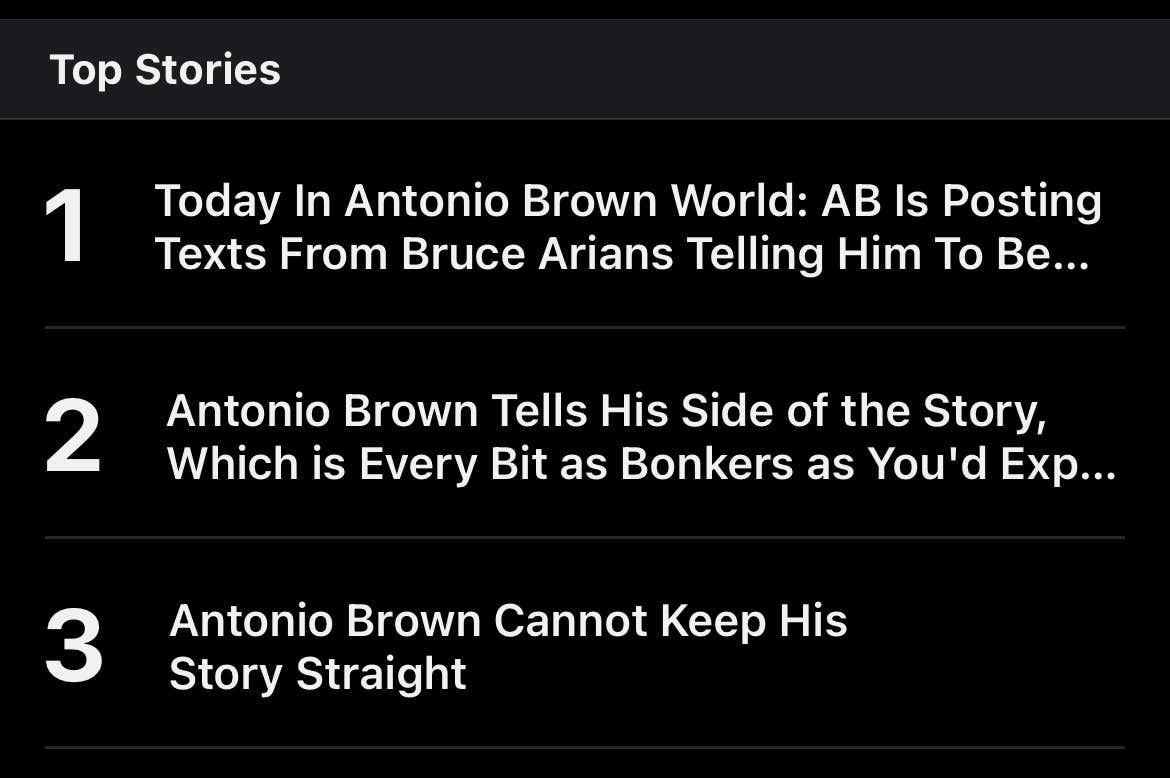 What a pair of texts that is. First we have the Bruce Arians text message where Antonio's coach since last season texts him that it's BA despite having won a Super Bowl together less than a year ago. Now Bruce Arians strikes me as the kind of guy who runs through phones because he loses or breaks them while out at the finest Tampa establishments at night. But something just seems fishy about the way that entire conversation went down, even though it seems clear that the Bucs weren't looking to rush AB back if he wasn't actually ready to play. I'm also sure that is the exact rhetoric an NFL team says as the doctor is filling up a shot of whatever the cutting edge pain killer is these days.

Then you have the Alex Guerrero texts, which honestly is the fairest business transaction I have ever seen in my life. If you try to get a refund for a charge you didn't make on your credit card, you usually have to go through three different call center operators and wait on hold while listening to some bootleg Mozart wannabe. Meanwhile, Guerrero responded to a text out of the blue in less than 2 hours and was like "Oh you want a refund Antonio? Sure thing. Just give me the account number and I'll forward it along to you", which AB included with his bank routing number uncensored when he tweeted this whole mess. Say what you want about the TB12 Method, but their customer service would have to be rated an A+ by the Better Business Bureau.

The biggest part of this is that I feel like AB going at AG (Does Antonio Brown only refer to people by initials?) is finally the straw that will break the Brady relationship's back. I think AB would be better off taking shots at some members of Tom Brady's immediate family over taking shots at Alex Guerrero. Yeah everyone loves their wife and kids, especially Tom Brady.

But the guy who made you immortal and allowed you to do things on a football field that only your psycho brain thought was possible will always have a special place in your heart that nobody else can possibly share.

Then the final act of betrayal was AB calling his former QB1 Marv from Home Alone.

Yesterday Aaron Rodgers called a writer who refused to vote for him for MVP a bum, which I believe is one of the deepest burns you can throw at someone along with clown and a bozo. Well calling someone tall Marv from Home Alone is the cinematic version of that. In case calling out Brady's shaman today and clowning his 2nd father Robert Kraft a couple of years ago, this was the final act of betrayal. I always thought there was a chance Brady would bring back Brown once things settled down next year after Chris Godwin cashes in somewhere else and Mike Evans tweaks a hammy. But it would take an ungodly amount of kindness to turn the other cheek of being called Marv. However, the best casting agent in Hollywood couldn't find a better Marv than Bruce Arians if they tried.

God I love Antonio Brown and hope he never logs off.