If your average, run-of-the-mill, garden-variety NFL player stripped to the waist in the middle of a game and then run through the end zone and then up the tunnel while his teammates were huddling up and trying to mount a comeback, you might think a reasonable explanation would follow. Or not.

When the player in question is Antonio Brown - and seriously, who else would it be - you'd be right to expect that what would follow is nothing short of total Bananaland. And if so, you wouldn't know the half of it.

As of late afternoon on Wednesday, Brown was inexplicably still on the Buccaneers roster.

And since then, he's released this statement explaining his actions: 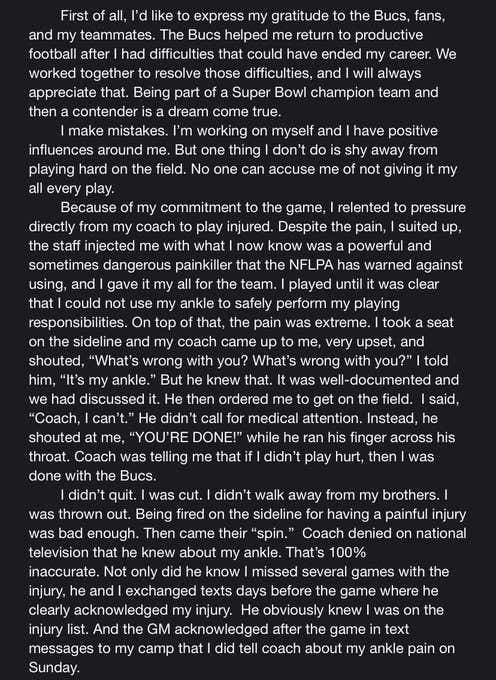 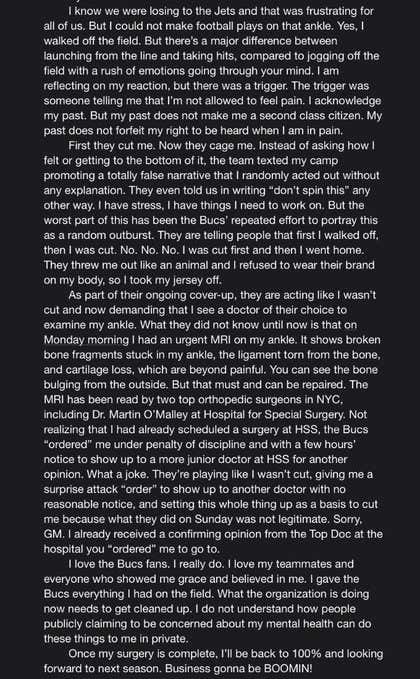 For starters, we need to commend AB on his prose. For a guy who catches footballs for a living, it's impressive as hell that he's capable of the elite storytelling skills of a great writer and the precise verbiage of the very best attorneys. If you know anyone who's ever in need of a consultant in the middle of a public relations disaster, it's hard to think of anyone more qualified to help them with the spin than this man. He's truly a multi-tool player when it comes to sports-related controversies. It says a lot for the value of a Central Michigan education.

That said, this is quite a story. Practically unbelievable. There are somewhere around 2,000 guys who dress in the NFL every season. It's a game filled with violence. A war of attrition where a large percentage of players play on the verge of season-ending injury every week. And many succumb every game of the year. So what a terrible break for this one athlete that it came to a head in this way.

Him pleading with the medical staff that he was injured. Them denying it. The coaching staff taking the trainers side of things. The team trying to force him out onto the field against his will. His having to stand up against their recklessness, even though he wanted more than anything to take the field with his brothers whom he loves. Ultimately left with no recourse but to take half his clothes off, gesture to the crowd and do the dictionary definition of "making a scene."

It could've happened to anyone. But through a terrible stroke of dumb luck, it happened to happen to the guy who shot his way out of Pittsburgh in 2018, Oakland in 2019 (with frostbitten feet and a helmet that didn't fit), and now, tragically, Tampa. All of them against his will. A victim of circumstances in each. Things like this never happened to say, Larry Fitzgerald. Or anyone else for that matter. But for some reason, keep happening to the same guy. Antonio Brown has the worst streak of bad luck in NFL history.

On a semi-personal note, there was a guy in my neighborhood who had a similar streak of bad breaks that Brown is going through. You'd see him with a black eye, as what happened, and his answer was usually something along the lines of "I was at the Good Company Lounge Thursday night, minding my own business. And this guy walked up and cheap-shotted me for no reason." Which never happened to anyone else the rest of us had ever met. But happened to him at least twice a month for his entire "adult" life.

That's Antonio Brown. Everyone has always done him wrong. His lawyers will make vague allusions to his "past" in their carefully worded public announcements, but he will never own up to his own failures as a professional and a human being. But will ask us time and time again to accept that he's right and everyone else is wrong.

Anyway, best wishes to Brown in his upcoming surgery. Unless he makes a miraculous recovery and gets back on the field soon. Either way, he'll be back in the NFL sooner or later. And we can all look forward to his next clown show. It's only a matter of time.