(I wrote this originally on Tuesday morning but was too pussy to submit it to be posted. I've been to enough Pats/Steelers games to know Steelers fans are mental cases when it comes to their team. So I didn't want the hate mail and twitter trolls that this blog will inevitably draw. But after hanging with the boys more than usual this week, and talking football, I'm more convinced than before)

Is Big Ben Roethlisberger the most overrated QB of our generation?

I ask this question because last night I couldn't help but (admittedly) be jealous as fuck of the send-off Steeler nation gave Big Ben at Heinz Field.

They rolled out the red carpet for him pregame, ESPN highlighted his career nonstop during the snooze fest that was the Baker Mayfield turnover fest, and then after the game he stayed on the field, (kept his helmet on the entire time for some weird reason), and got a heroes send-off from the crowd.

I couldn't help but be jealous as fuck because we watched Tom Brady run laps around this oaf for two decades in New England. And you wanna know the send-off he got?

A pick-six and an early playoff exit courtesy of that cock smooch Vrabel. Brady hadn't announced he was leaving or anything of the sort, we all still held out hope (like idiots) that Belichick would work something out to bring him back for another shot, so it was this weird feeling of, "is this his last game here?… Is he really ending his Patriots career on a pick-six? No chance right?"

We all know what happened.

So when he returned two years later with the Bucs to play against New England, we had our chance to say "thanks" and "goodbye" in a belated, awkward way.

How did the Patriots facilitate this?

With a 30-second "tribute" video that they didn't even announce they were playing, as fans filed into Gillette in the pouring rain.

So yah, seeing Big Ben get the hero treatment really pissed me off.

Is he the most overrated QB of our generation?

I honestly don't know. That's why I'm asking the question.

But I think he's definitely in the conversation. And here's why.

For starters, yes, I'll acknowledge it's hard to call somebody overrated when they have two championship rings to their name.

For his career, (to date) this is what his numbers look like 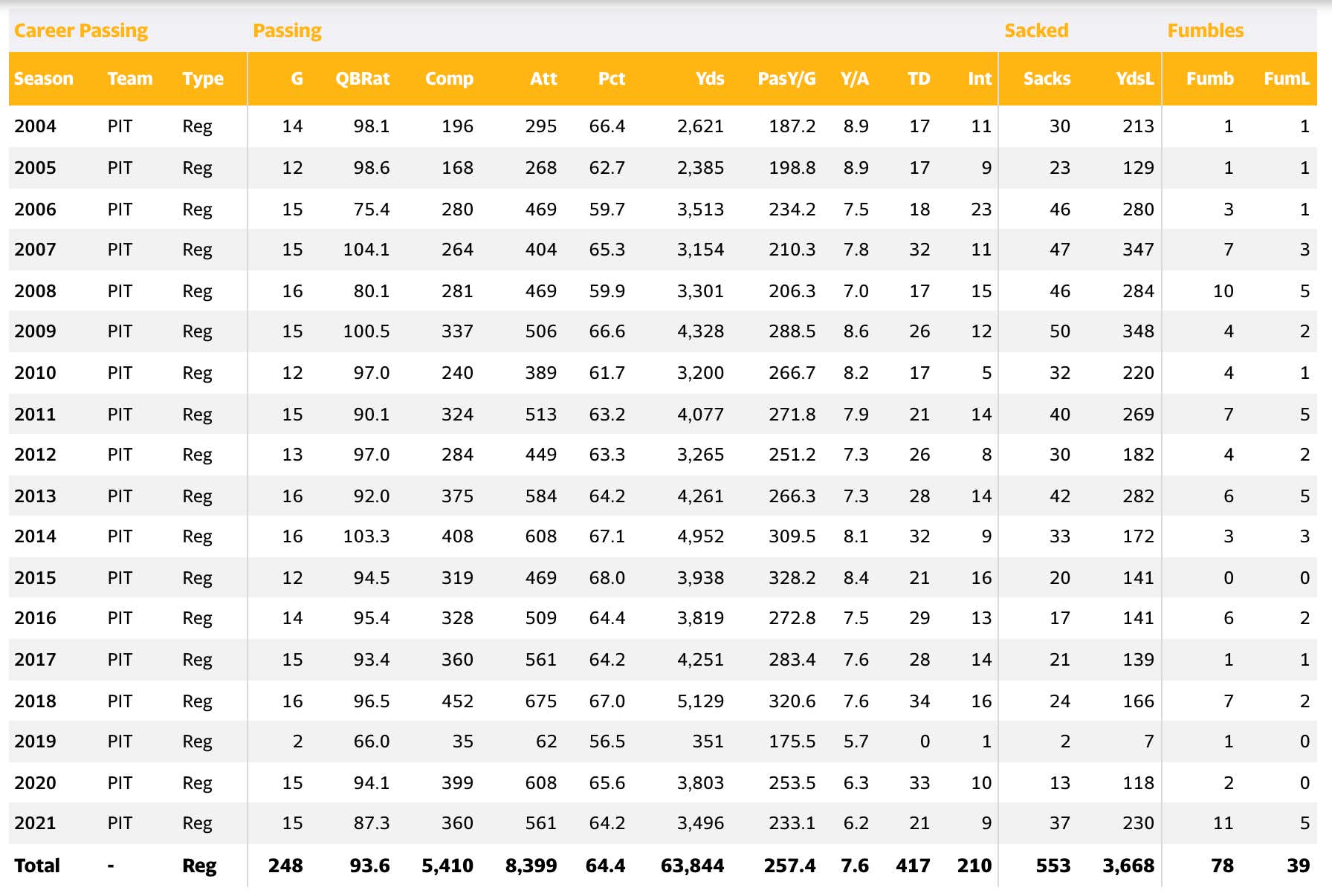 For comparison's sake, let's use a guy who was drafted in the same year, to a team that never enjoyed the benefits that Big Ben did playing for the Steelers. Bolo Tie Phillip Rivers. 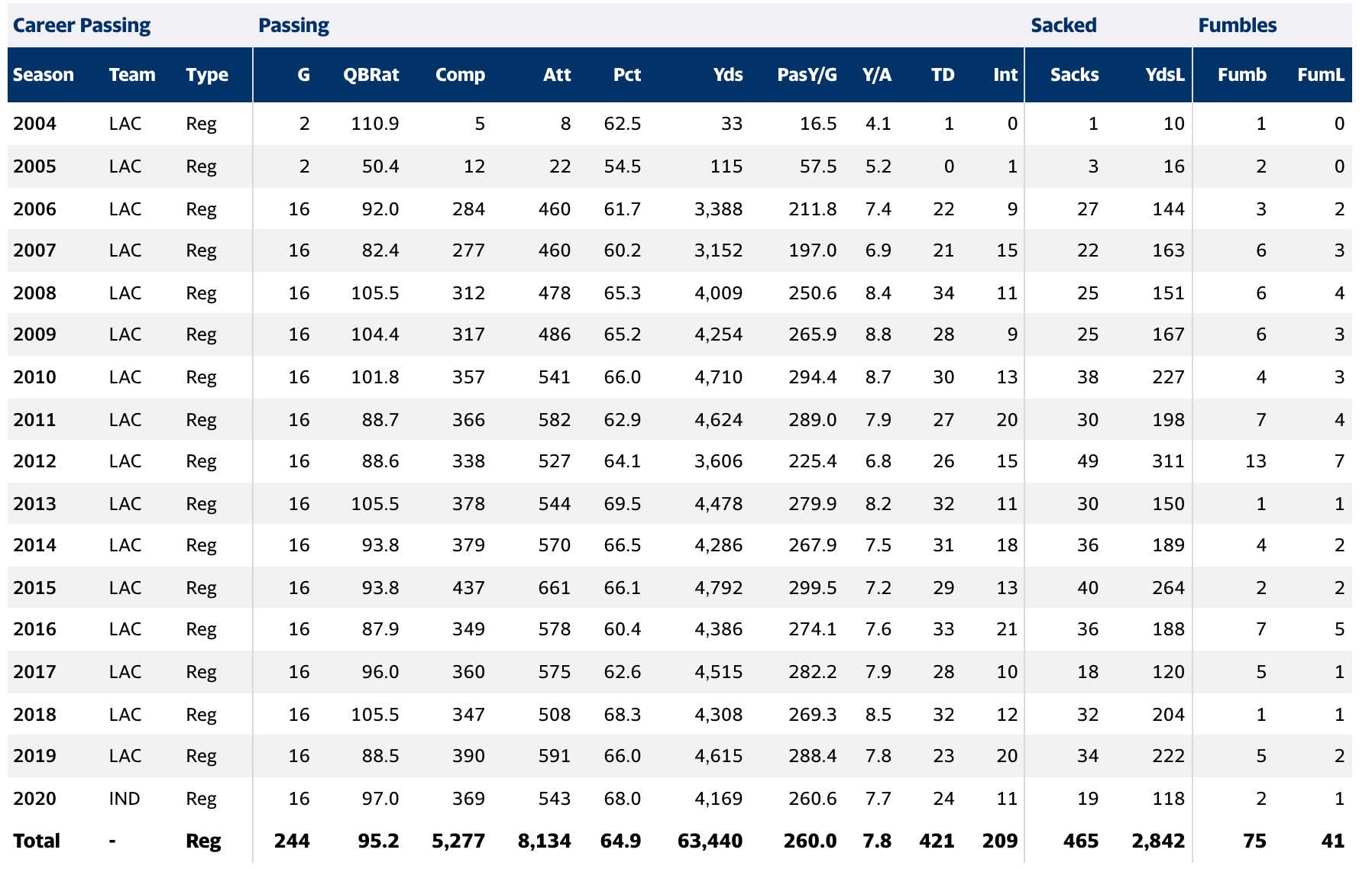 Almost identical, with Rivers actually having the edge in QBR, in a lot fewer games.

Big Ben never won an MVP, or came close, he’s never even been an All-Pro, first or second team.

He's had an elite defense, two hall of fame coaches, an awesome GM, a hall of fame owner and legacy family, and the Steeler name that makes Pittsburgh a prized destination for free agents.

Stat-wise, 2018 was great for Roethlisberger. He had a career-high 5,129 passing yards and 34 touchdown passes. However, these also came on a career-high 675 passing attempts, a stunning 67 attempts more than his second-highest season (608 in 2014). Roethlisberger’s PFF grade of 78.2 was his lowest since 2011.

Do you think Phillip Rivers' career goes a little, or a lot, better had he fell into the arms of Pittsburgh rather than San Diego?

Not that it matters, but Big Ben also routinely wound up in the top five of those Sports Illustrated Player votes for Most Overrated.

Again, I'm not saying Roethlisberger is the most overrated QB of the past 20 years. I'm just saying he's extremely lucky that the Browns passed on him and he landed in Pittsburgh. Otherwise, there's no chance we're even talking about him today.