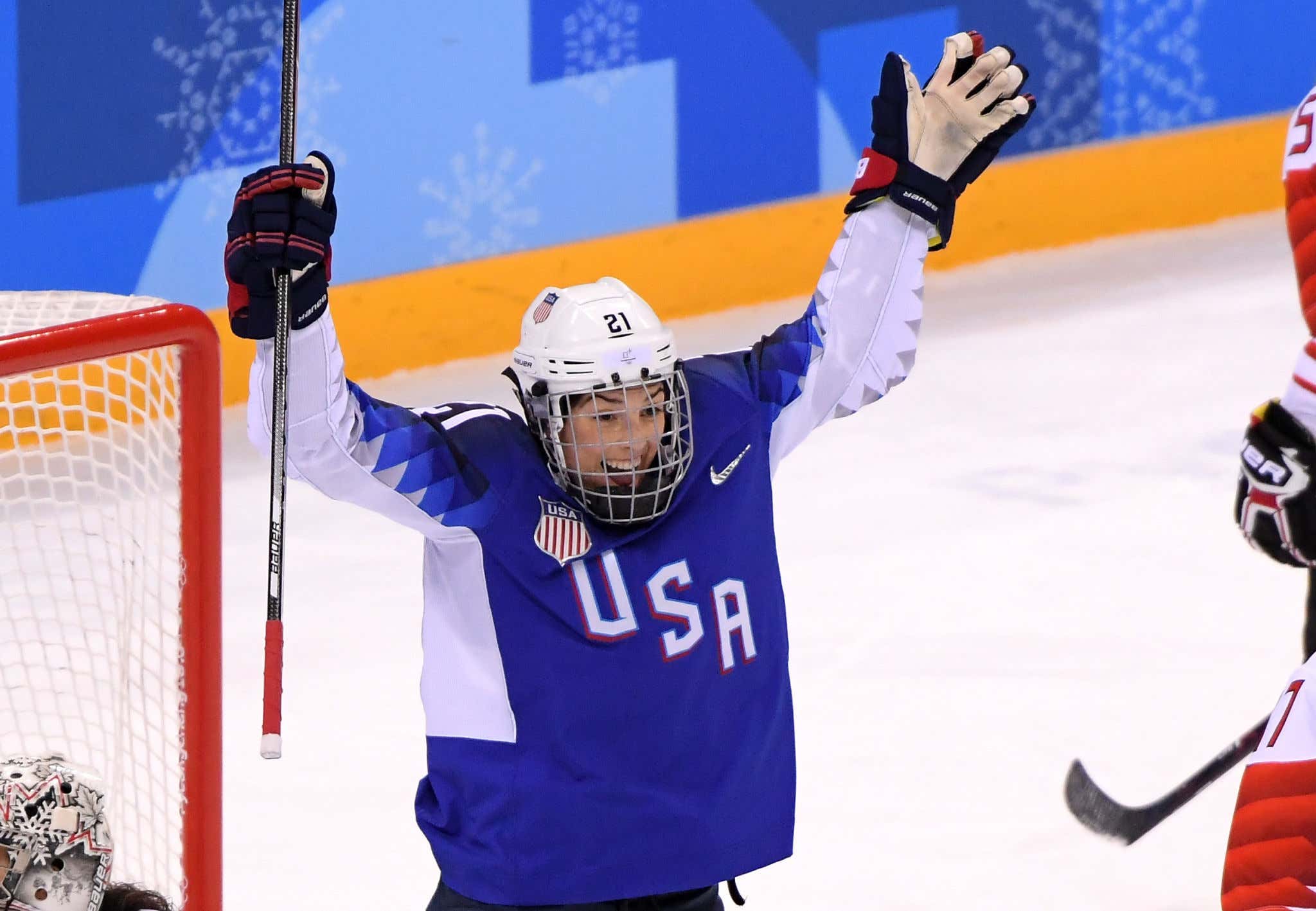 There's nothing better than Olympic hockey. You have the best athletes in the world competing against each other for international supremacy. World's best taking on the world's best and playing for their country's pride. Obviously the news that the NHL won't be sending players to compete in the Olympics again this year puts a huge dagger in the men's tournament coming up in China. You can try all you want to buy in to the Olympic men's hockey tournament in Beijing but you know it won't be the same without the best players in the world participating.

But the women's tournament? Well for the first time since the 2002 Olympic Games in Salt Lake City, the USA Women's National Team has a chance to repeat as back-to-back gold medal champs. In the history of women's hockey at the Olympics, only 2 nations have ever won gold. USA in '98, Canada in '02, '06, '10, and '14. Then USA again in South Korea '18. 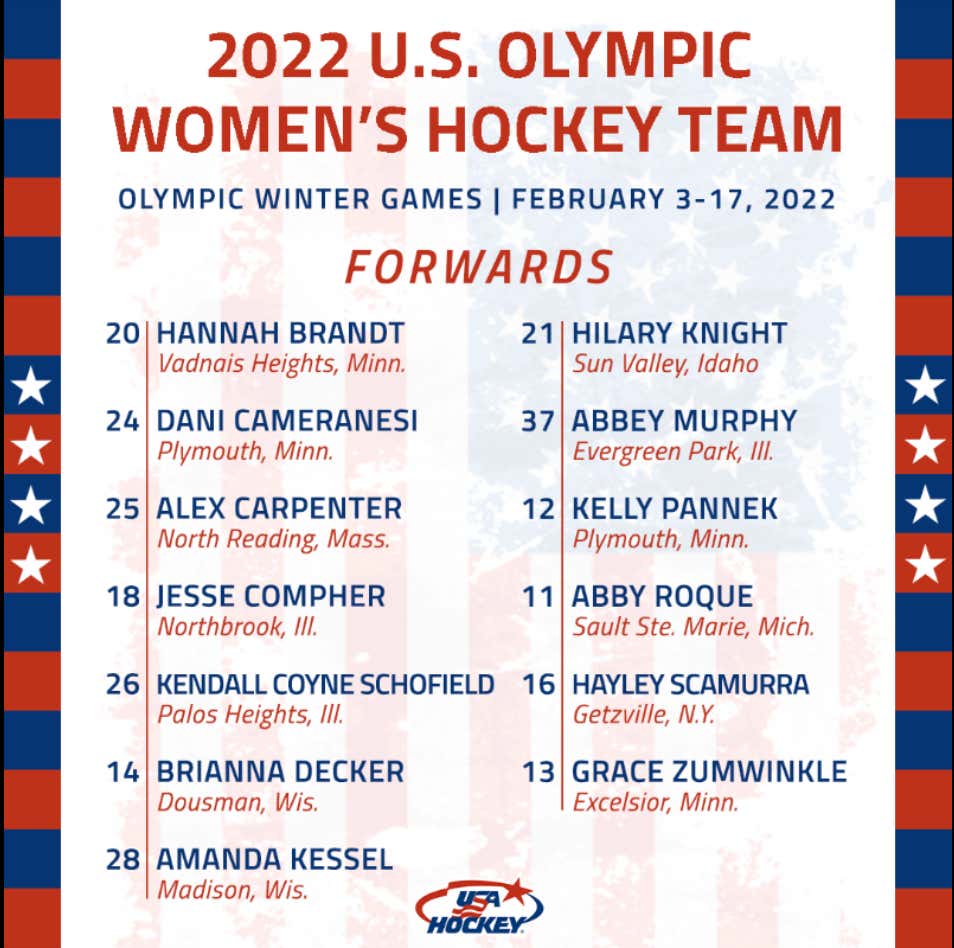 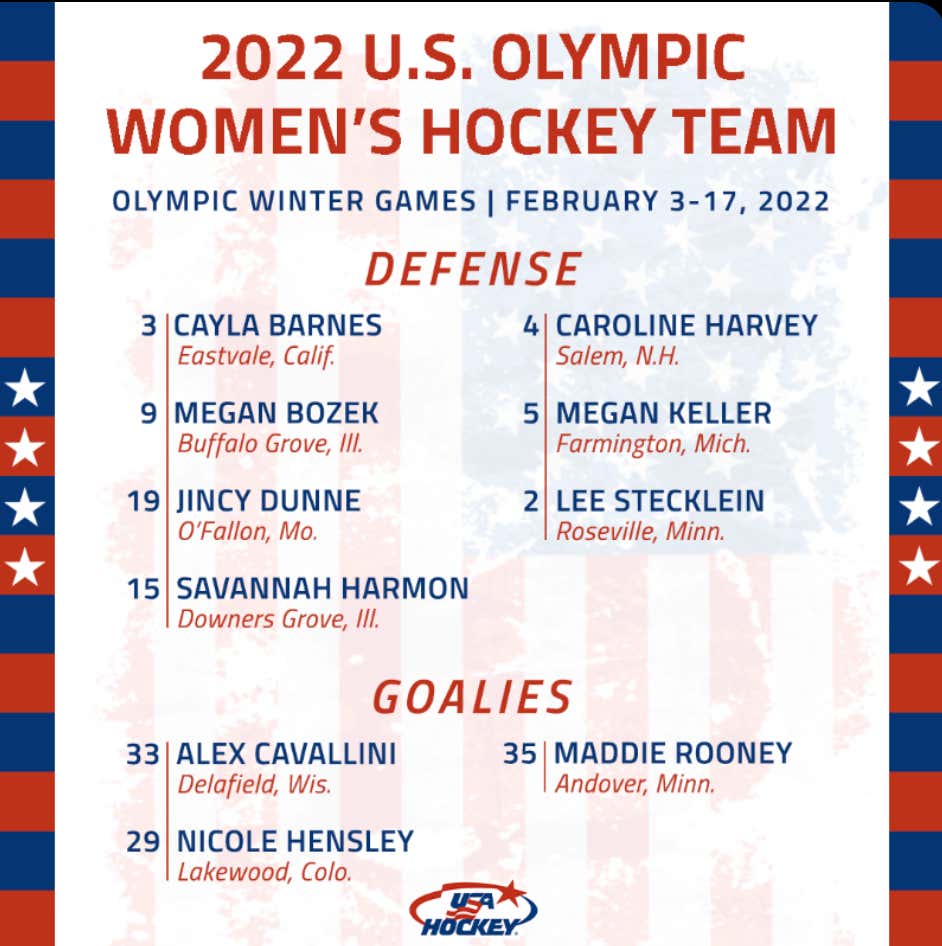 Obviously the headliners of the forward group are going to be the vets. Hilary Knight is now playing in her 4th Olympics, making her only the 4th American player to do so. She's been on 8 out of the 9 US teams to win a gold medal at the World Championships. She was the 2015 World Championship MVP, the top goal and point scorer at the 2019 World Championships, and somehow is now the oldest player on the roster. Then you've got Amanda Kessel, Brianna Decker and Kendall Coyne Schofield all playing in their 3rd Olympics.

First off, Kendall Coyne can fucking fly. She'll most likely be the fastest player anywhere within 1000 miles of Beijing at these Olympics, and that's including all the speed skaters. She was the best forward the 2019 World Championships and also had the most points in the 2017 World Championships. Weapon.

There would be another forward making their 3rd Olympic roster but Alex Carpenter was left off the squad in 2018 after winning a silver medal in 2014.

She was the best player in college hockey in 2015. Won gold at the World Championships in '13, '15, '16, '17 and '19. But after getting cut from the 2018 Olympic team, Carpenter has been playing in China with the Kunlun Red Star women's team in the Russian league. She's had the most points in that league for the past 2 seasons, and plays with Megan Bozek who was also left off the 2018 Olympic roster after winning silver at the 2014 Olympics. So that's 2 players who were on the 2014 roster, got cut in 2018, went on to play in China for the past couple of seasons, and now have a chance to finally get their golds in China this year. I'd expect both of those players to be capital 'B' Buzzing this tournament.

Along with Bozek on the blueline, Lee Stecklein will be making her 3rd Olympic appearance.

She's coming off being named the best defenseman at the 2021 World Championship where she had 7 points in 7 games. She'll be the most experienced player on the blueline, but the youngest player on the team will be Caroline Harvey. She's supposed to be at Wisconsin right now but after making the national team for the 2021 IIHF World Championship as an 18-year-old, Harvey has been spending the past few months playing in the North American Hockey Academy, which is essentially the major junior equivalent for women's hockey.

Harvey will be the youngest player on the team this time around. Last Olympics it was Cayla Barnes who got to win a gold medal as a 19-year-old.

Imagine winning 2 Olympic golds by the time you're 23? Must be nice.

And then between the pipes it's all Maddie Rooney.

She led USA to gold in 2018, led USA to a World Championship gold in 2019, and then missed the 2021 World Championships after getting injured during training camp. So if you really think about it, USA has never lost a major international tournament when Maddie Rooney was starting in net. Bad, bad news for the Canadians this time around.

So there you have it. The puck drops one month from today. And just a couple short weeks after that, we'll be watching the US Women's National Hockey Team skate around the ice with gold medals draped around their necks for the 2nd consecutive tournament. Because USA Hockey is Do or Die.

Now give me one more Jocelyne Lamoureux for good measure.