The Guardian - The Oscar-winning film star Nicolas Cage has said he prefers to be called a thespian rather than an actor.

Call it a sign of the times — just one more depressing example of how far we've fallen as a society in terms of civility. In terms of respect for the greatest among us.  That Nicolas Cage — THE Nicolas Cage — has to practically beg people to address him by the title he's so clearly earned over decades and decades of transformative, generation-defining art: thespian.

The Face/Off and National Treasure star discussed his career and his reputation for “over the top” performances on Variety’s Awards Circuit podcast. He likened his process to “shamanism” for “going into the imagination”.

“I really don’t like the word ‘actor’ because for me it always implies ‘oh, he’s a great actor, therefore he’s a great liar, and [great at] lying,’” he said.

The only one lying around here is you to yourself if you don't recognize Cage's preeminence in his field of artistry. Calling him an "actor" is like calling Michelangelo a doodler.

And yet, still: humble he remains.

You can cut the humility with a knife. The self-deprecation; putting himself down so others won't feel as low as they actually are compared to him. This, coming from the guy who did Leaving Las Vegas, Con-Air, Face/Off, City of Angels and Snake Eyes back to back to back to back to back in a 3 year stretch. Does that sound like an "actor" to you, or a thespian-shaman hybrid?

“What early shamans would do is go into flights of imagination to find answers to help their village. I like looking at it like that, with the risk of sounding completely absurd and ridiculous. I like the idea of it being something a little more organic and less artificial.”

I remember thinking as I was watching the 2021 instant-classic "Willy's Wonderland," the way Cage embodied his character "the unnamed Janitor" as he battled the 8 murderous animatronic demons in the abandoned haunted family amusement park, how shaman-istic the performance was to its very core. In fact I hadn't seen a role played that organically since…well, Cage again, of course — when that cult burned his girlfriend alive, so he forged himself a battle axe and inhaled massive quantities of coke and tainted LSD then tracked them all down and decapitated Mother Marlene, pegged the cult leader with her lopped-off head then crushed his skull in while hallucinating like a motherfucker in Mandy.

And somehow in between those two masterpieces he found time to transcend genres once again, in that movie (excuse me, film) where he had to hunt a 400 pound white jaguar on a boat.

The guy just does not miss.

And he never will — just two weeks ago, Cage said the most important 4 words since "Let there be light": 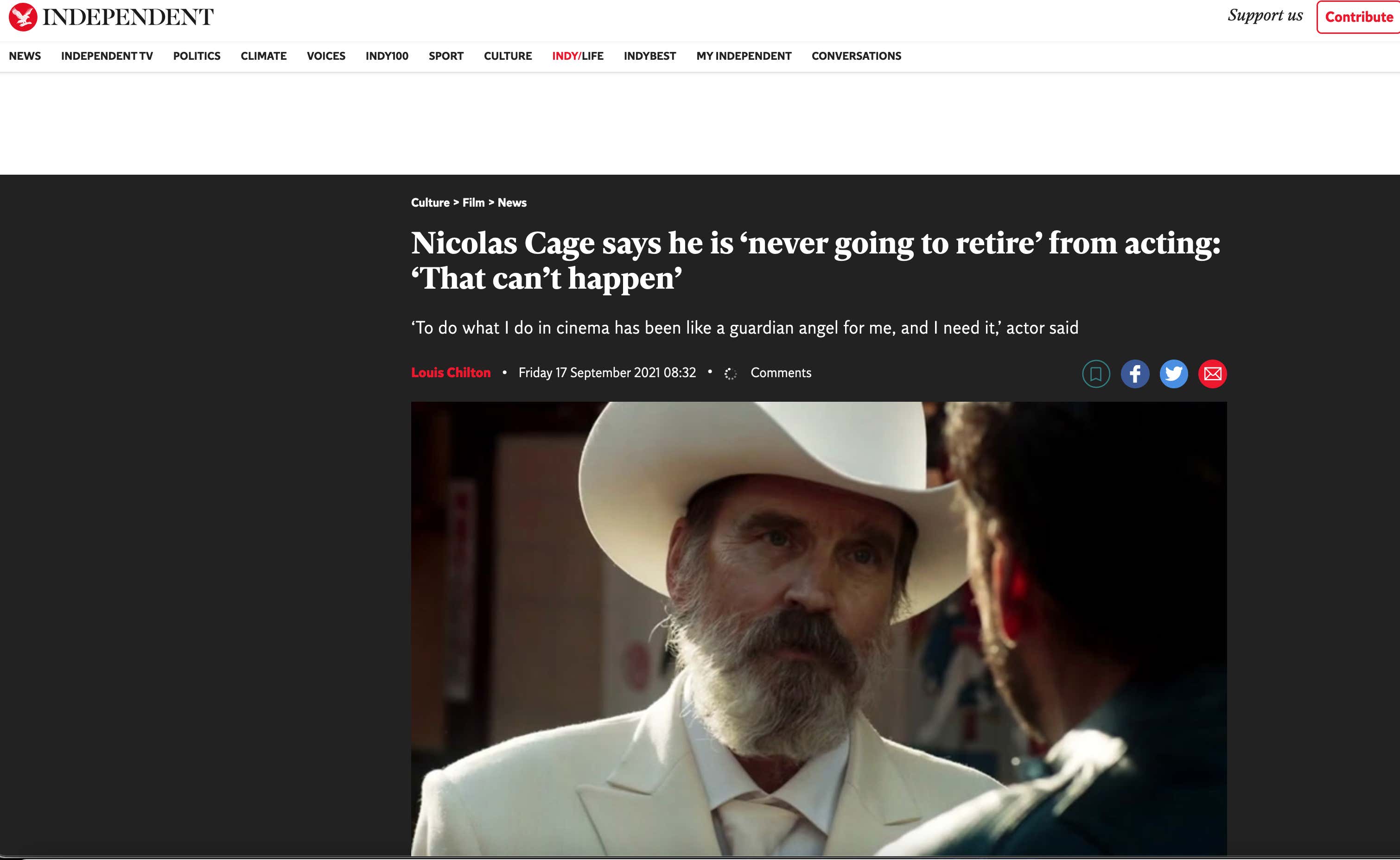 None of those cinematic tour-de-forces I mentioned are Cage's own personal choice for his best role — for that, you have to go back to little Nicky Coppola riding the school bus, transforming into Roy Richardson:

Cage, whose real name is Nicolas Coppola, recalled his first acting experience on a school bus when he a friend were being bullied.

“One day I said ‘I’m gonna have to have some attitude’ and I put on some cowboy boots and a leather jacket and I started chewing gum. I said: ‘I’m not Nicky Coppola, I’m Roy Richardson, and if you don’t leave my friends alone, I’m gonna kick your ass.’”

Cage added: “That was a performance and that was the first time I think I could act because they left Nicky alone after that – it worked.”

Chewing gum -- even in elementary he was making bold acting choices.