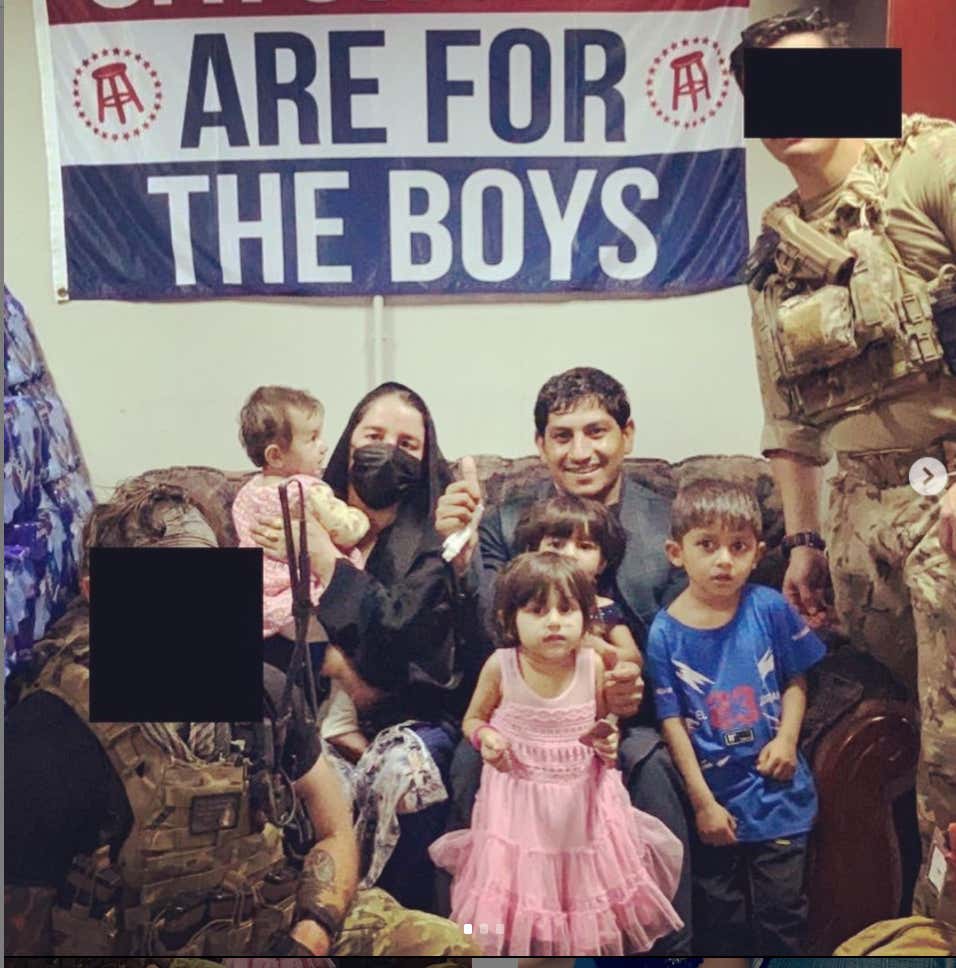 An amazing, gut-wrenching, hand-wringing story of escape for the family above, but first a bit of background on the current atmosphere they were dealing with:

Despite Taliban goons (goons? you really showed them, Kate) giving countless interviews saying, "Heyyy, we've changed! We're treating everyone just fine. Nothing to see here!", they have not changed, things are not fine and there is a lot of terror to see. (Shocking.) Images are emerging of horrific violence as thousands desperately try to get to Kabul Airport. One of the most hauntingly crushing photos so far is in the article below.

Unfortunately those who have made it to the area surrounding the airport aren't much better off. Huge crowds, estimated by soldiers there to be around 10,000, wait for days in the broiling August sun with only the shirts on their backs. At this point people are essentially crowd surfing babies and toddlers up to military personnel at the gates.

So you have Taliban checkpoints making it nearly impossible to get to Kabul, their enforcers herding people away from the airport with whips & gunfire once they are in Kabul, and mass chaos at the airport itself for those who make it to the gates. Keep this atmosphere in mind as we go back in time a bit for the story of Major Tom Schueman & Zak, as told through the magic of shoddy FB & Instagram screenshots (top tier big-J journalism by me here):

Among other service, Zak stood alongside Schueman & his fellow Marines in Sangin with 3/5, the infamous Darkhorse Battalion, during one of Afghanistan's bloodiest battles. Over this time a staggering 25 Marines were killed and over 200 were wounded in the fighting. (You can learn 3/5's story HERE, and listen to Schueman share examples of Zak's bravery on a ZBT episode HERE starting at 01:37:09).

Zak begins trying to attain the visas he was promised for himself & his family. Like tens of thousands of others who were promised visas, he gets lost in the bureaucracy & gets nowhere. These efforts continue throughout the years following. 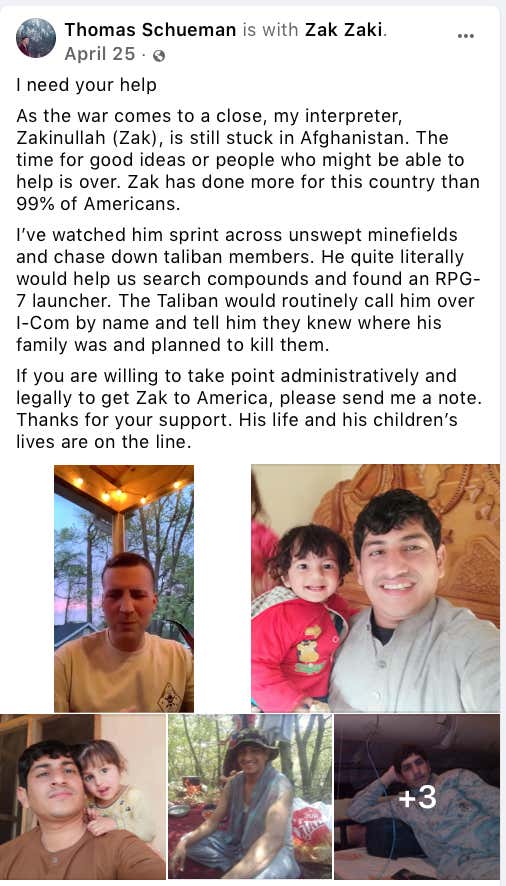 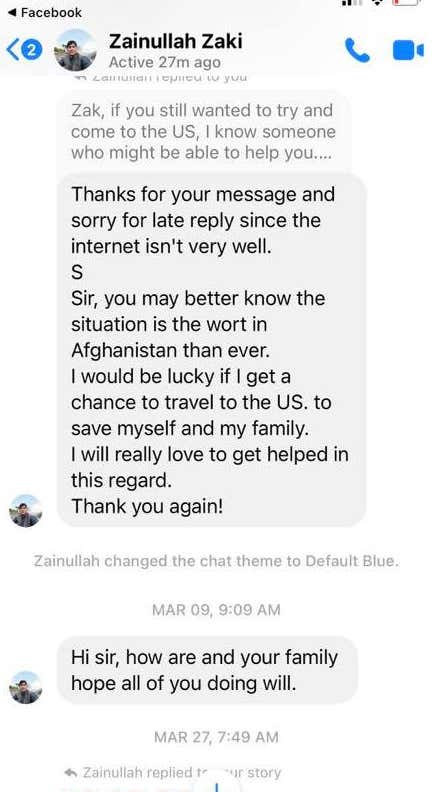 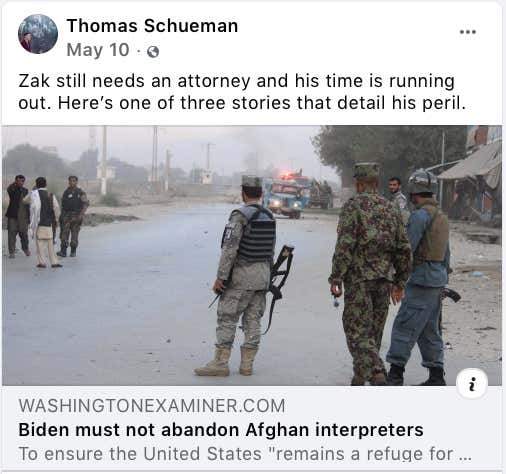 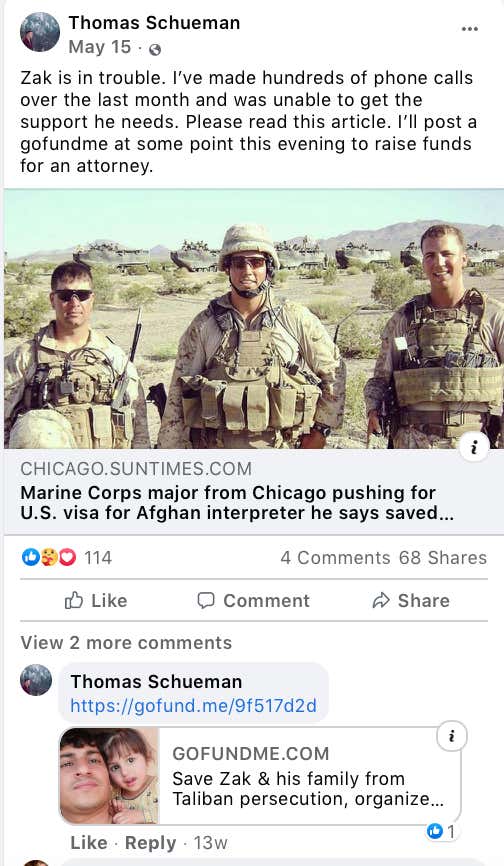 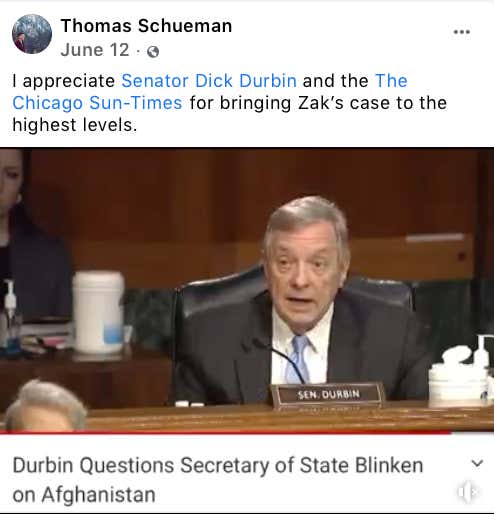 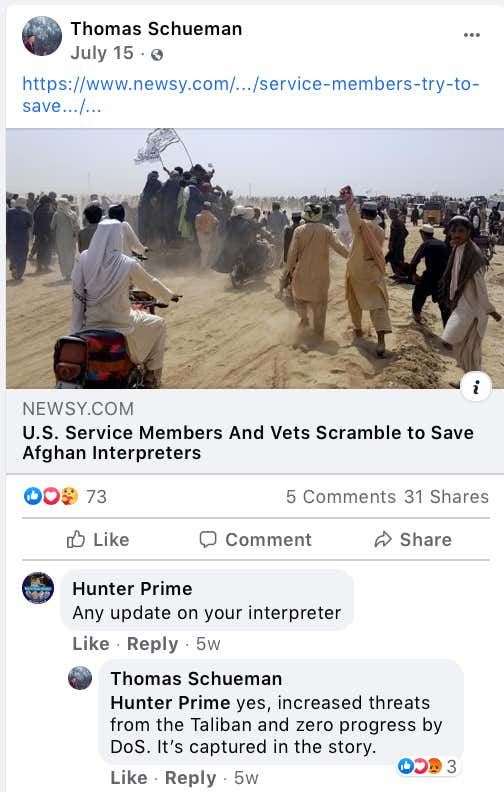 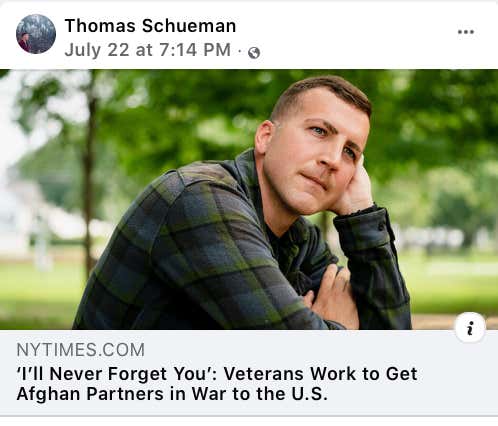 By this point Schueman had gone to bat for Zak with whoever would listen. Politicians, news sites, podcasts, social media, etc. The examples above are only a few as time ran out. He also came on ZeroBlog30 that month to share his story, too.

AUGUST: As we all know, this is when the withdraw went into overdrive and shit hit the fan.

The morning of August 15th it sounded like all that hard work had paid off & Zak and his family were close to getting out.

But by that evening they still hadn't gotten where they needed to be. Schueman was posting across social media desperately hoping 6-degrees-of-military-connections would help (2/1 and 1/8 are Marine Corps infantry battalions). Maybe someone would know someone on the ground there.. 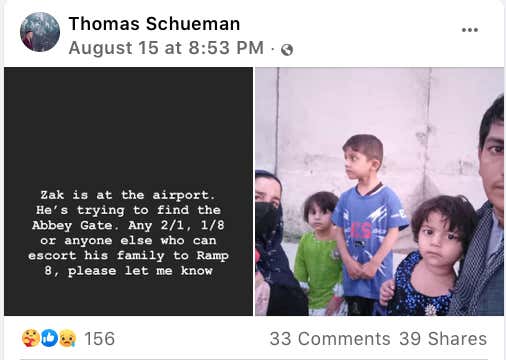 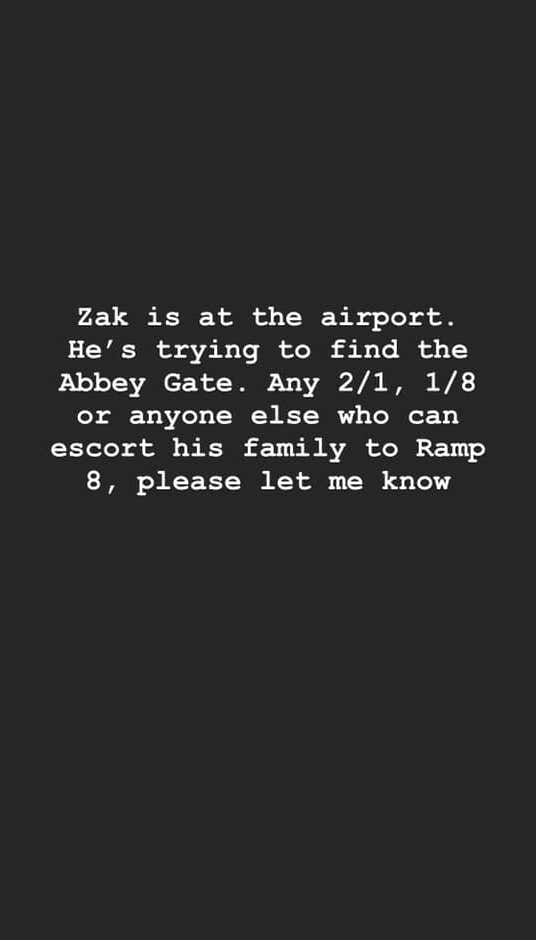 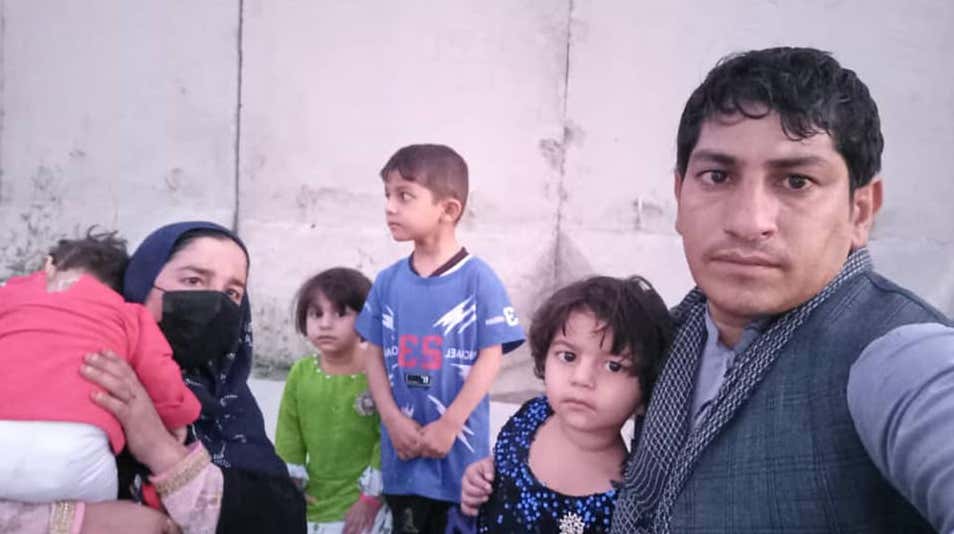 And it's that photo above that got me most of all. There is something about Zak's face here that burned into my mind. You can feel the weight of it… He knows what awaits them if they don't get out of this limbo as soon as possible. Keep in mind, too, the immediate needs of four small children in the Afghanistan summer heat with no shade, food, water, bathroom, crammed up against thousands of others just as desperate.

I, along with a growing group, began hitting 'refresh' on Schueman's FB & Instagram pages hoping the next post would be a miracle. It felt personal for reasons I can't quite explain. But the next news later that night was not good… 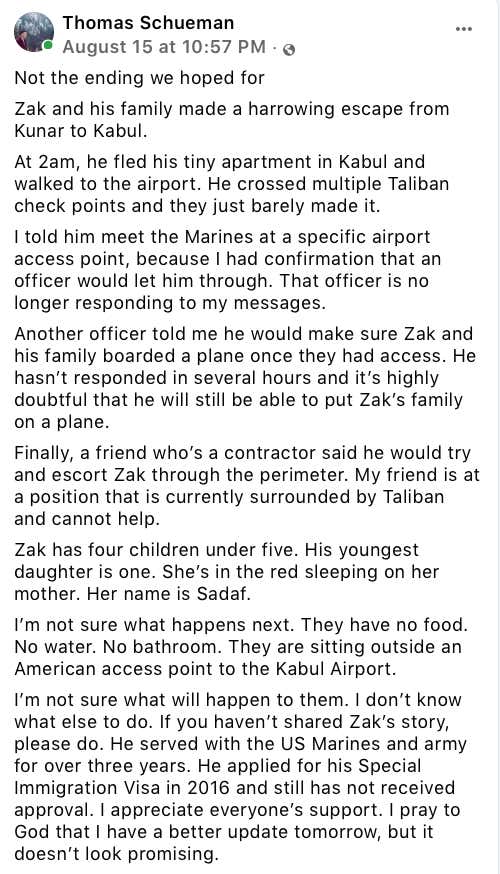 By August 17th, another failed attempt even though they were only feet from the entry. This also made me think of the soldiers, airmen, Marines, sailors etc. on the ground there, too, and the impossible decisions they're being forced to make, and the humanity & professionalism they are showing in the face of chaos. My heart broke for Zak & his family at the same time. For Schueman to have contact with troops on the ground there (communication is wildly slow, unreliable & difficult) & Zak to be so close… 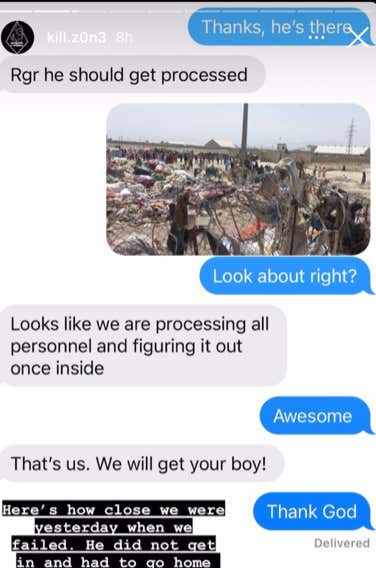 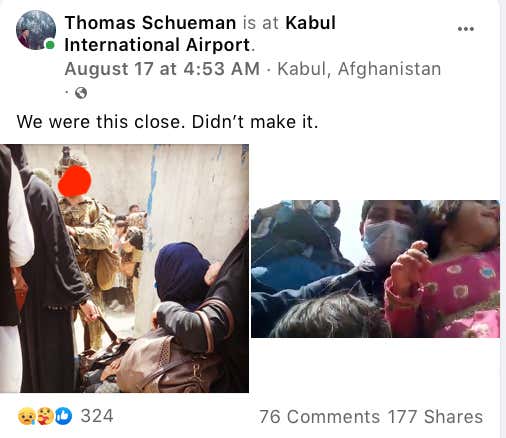 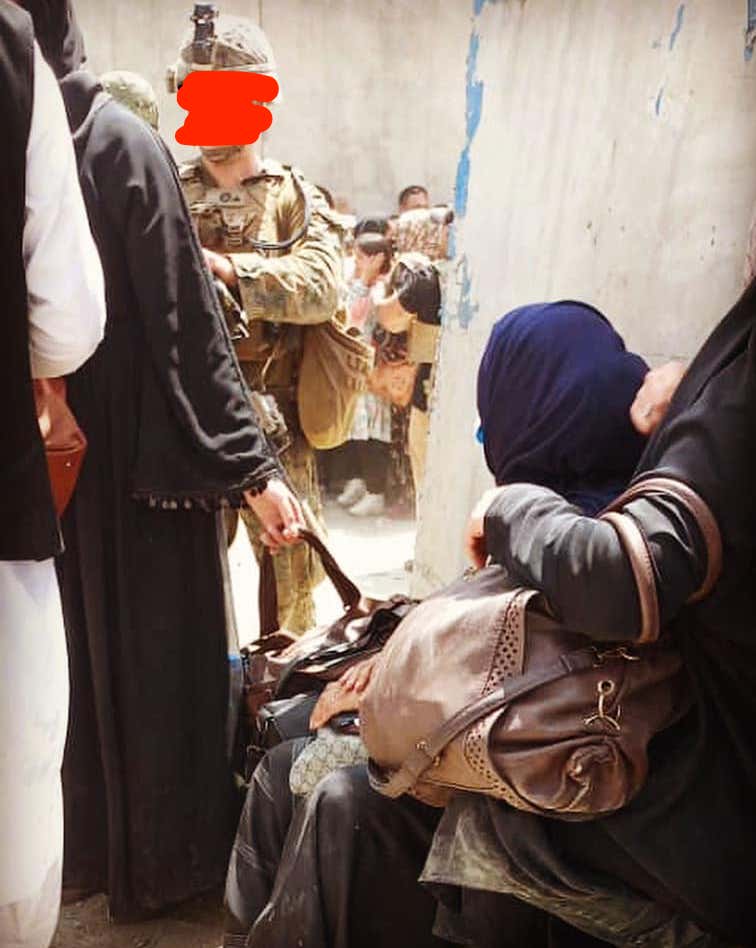 And then finally on August 18th… 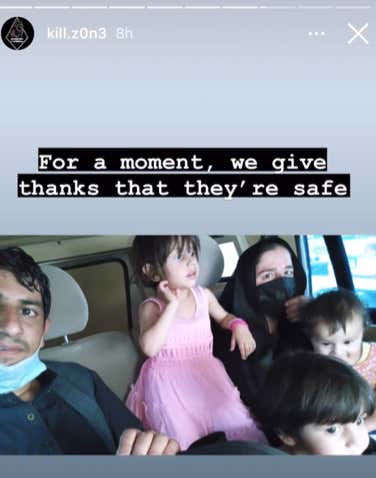 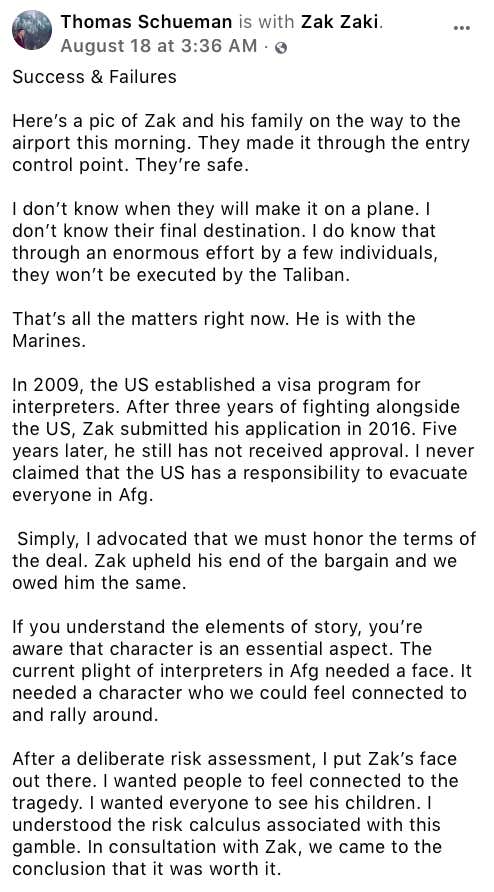 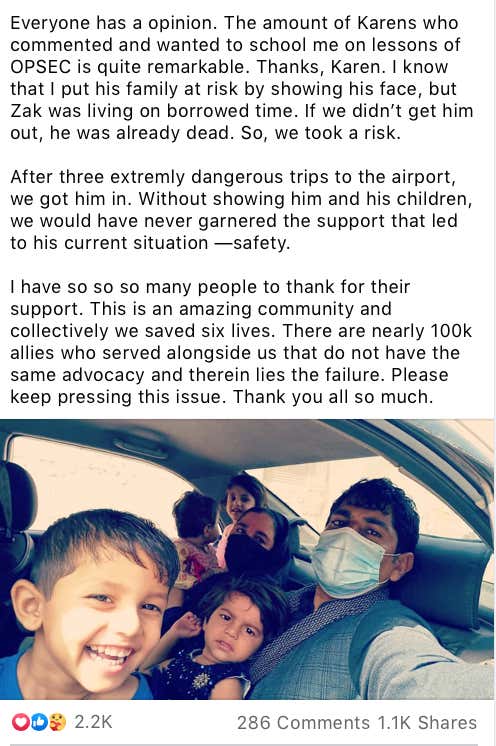 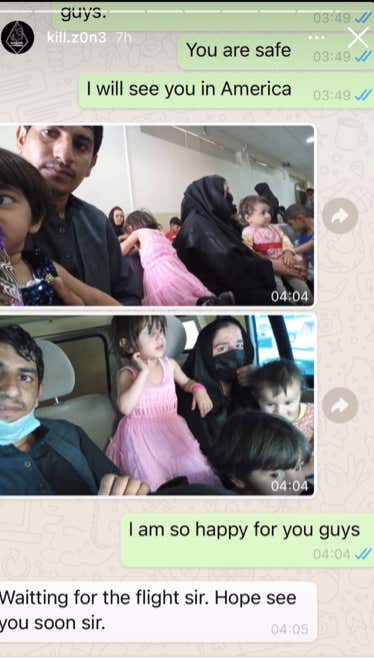 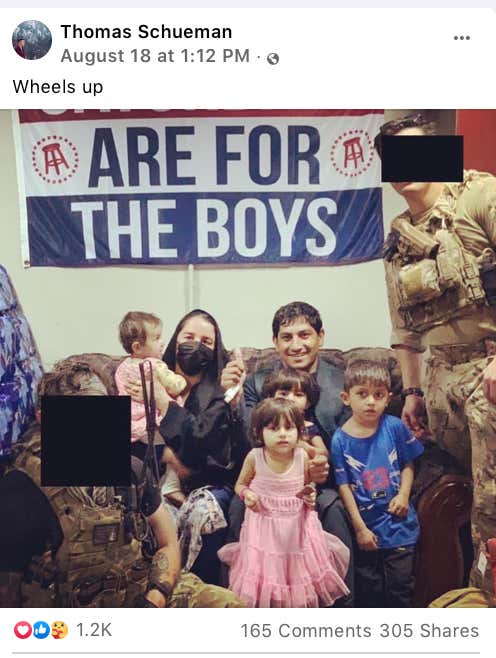 Today: There's no telling how the rest will play out for them (their visas are still fucked despite YEARS of advocacy & attention from the highest levels, and this is one of the more hopeful cases…) but for the time being they are safe. The kids have been through the wringer & needed medical attention but are going to be ok:

And that GoFundMe that Schueman started for them back in May is up to nearly $84K.

Scrolling through the comments from donors, many of whom have a close relationship with this war, was inspiring & humbling…

And this story is one of HUNDREDS I have seen that are still playing out across various social media platforms. Veterans, diplomats, NGO workers, active troops and more going well outside the scope of their jobs, networking like crazy & slinking under the radar to help Afghans survive the process & hopefully escape. These are just a small few examples:

The ZBT crew has also been inundated with requests of all sorts as people ask for advice, amplification or more direction on how they can help their own interpreters, etc. It's mind boggling what veterans are going through to help after all they've been through already… 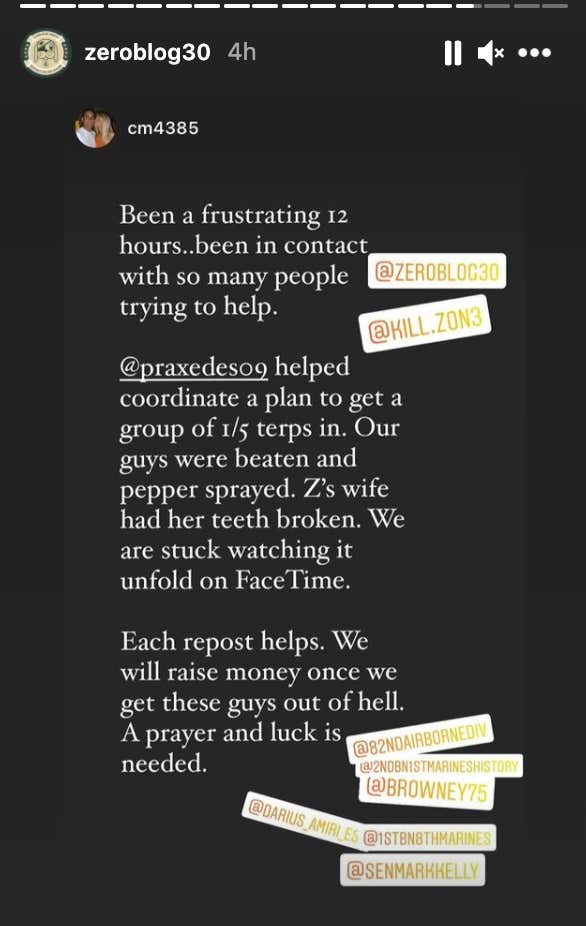 One Marine I knew from 2010 DMed to tell me he was so fired up & frustrated he felt like going over there & doing it himself. (While also asking me if I could help get his Marine buddy ("a complete psychopath") get on the next RnR. This gave me a much needed smile. Promise I will check with Devlin.) 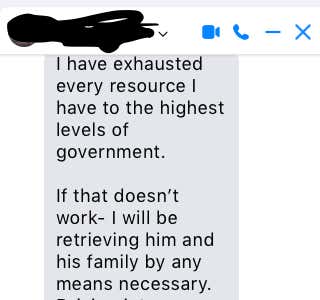 As per usual I could go on and on. But I'll end it here… If this has tugged your heartstrings or infuriated you at all and you want to help the process, please bug your representatives. Most congressional office websites have email forms where you can copy/paste this directly. (House directory / Senate directory)

As a constituent and a (something that makes you stand out, like being a veteran or mildly successful gambler), I am heartbroken by the recent events on the ground in Afghanistan. To prevent as much human suffering as possible, I strongly urge you to help expedite the process to evacuate our Afghan partners and their families as they seek safety from Taliban retribution. This will require temporarily waiving parts of the SIV (special immigrant visa) and asylum-seeking processes as needed to safely transport them out of the country.

Thank you for your consideration, and please feel free to contact me if you would like to discuss this issue further.

Basically, get them to a safe house & worry about the paperwork there.

In closing, seeing the efforts taken by so many is a reminder that in all this ugliness there are so many good people out there. Thinking of all the active troops facing such a painfully dire, chaotic situation with humanity & selflessness.