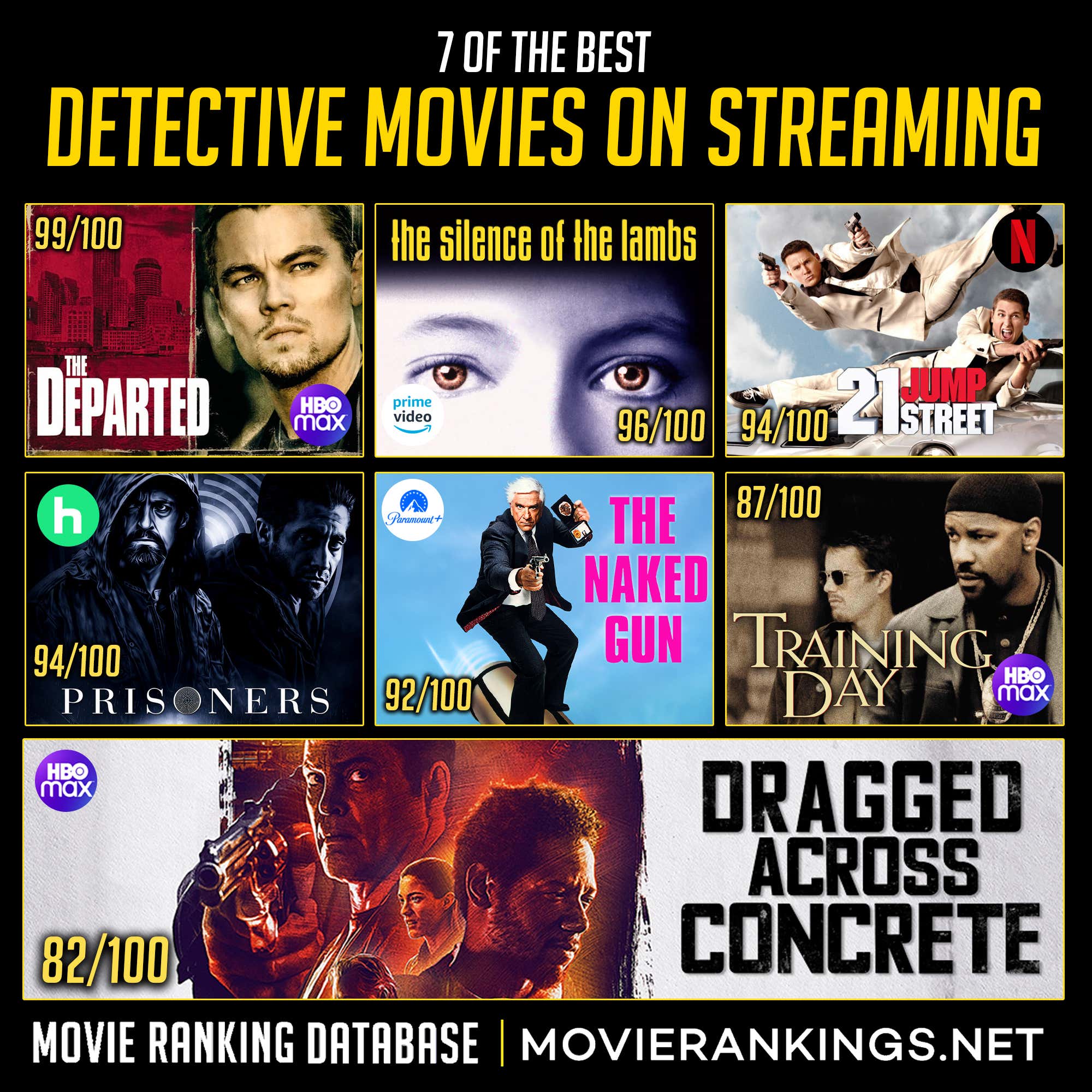 Some of these might be stretching the boundaries of what is considered a detective movie, but I took some liberties in the name of good movies.

The Departed - 99/100 - HBO Max: Endlessly rewatchable, razor sharp, and arguably one of the best and biggest casts of any movie ever made. About as close to a perfect movie as there could possibly be.

Clarice Starling is a top student at the FBI's training academy. Jack Crawford wants Clarice to interview Dr. Hannibal Lecter, a brilliant psychiatrist who is also a violent psychopath, serving life behind bars for various acts of murder and cannibalism. Crawford believes that Lecter may have insight into a case and that Starling, as an attractive young woman, may be just the bait to draw him out.

One of the greatest psychological horror movies ever made anchored by a POWERHOUSE performance from Hopkins and Jodie Foster. It is one of those must-watch movies that everyone has to get to at some point in their life.

This had absolutely no right being as hilarious as it was. A movie reboot of a 30-year old tv show that co-starred Channing Tatum, who was then the guy from Step Up and Dear John. And it turned out to be hilarious, smart and really well directed from the future animated movie kings Phil Lord and Chris Miller.

This is smaller in scale than most of the Denis Villeneuve movies you know like 'Dune', 'Sicario' and 'Arrival'. That said, it is no less excellent. Jake G and Hugh Jackman both give performances that are easily in their respective top-5's, and there are twists and turns that will make your gut wrench.

"When the incompetent Officer Frank Drebin seeks the ruthless killer of his partner, he stumbles upon an attempt to assassinate Queen Elizabeth."

I miss Leslie Nielsen so much. His delivery in these movies has made me crack up at every stage of life that I've watched them. Also, say whatever you want about O.J. Simpson(for example: That he is a murderer), but he is a solid actor here as well. Sue me, Nordberg makes me laugh!

On his first day on the job as a narcotics officer, a rookie cop works with a rogue detective who isn't what he appears.

Denzel and Hawke were so god damn good in this movie. The whole thing feels like a thread that is constantly being pulled until that final stand. What an iconic line to end Alonzo Harris's story as well.

Two policemen, one an old-timer, the other his volatile younger partner, find themselves suspended when a video of their strong-arm tactics becomes the media's cause du jour. Low on cash and with no other options, these two embittered soldiers descend into the criminal underworld to gain their just due, but instead find far more than they wanted awaiting them in the shadows.

Among all these movies, this one is probably the least watched. It's from S. Craig Zahler, who directed 2 other movies I really like in 'Bone tomahawk' and 'Brawl in Cell Block 99'. It is a really gritty and a little slow burning, but there is some great action and solid performances from Mel Gibson and Vince Vaughn.