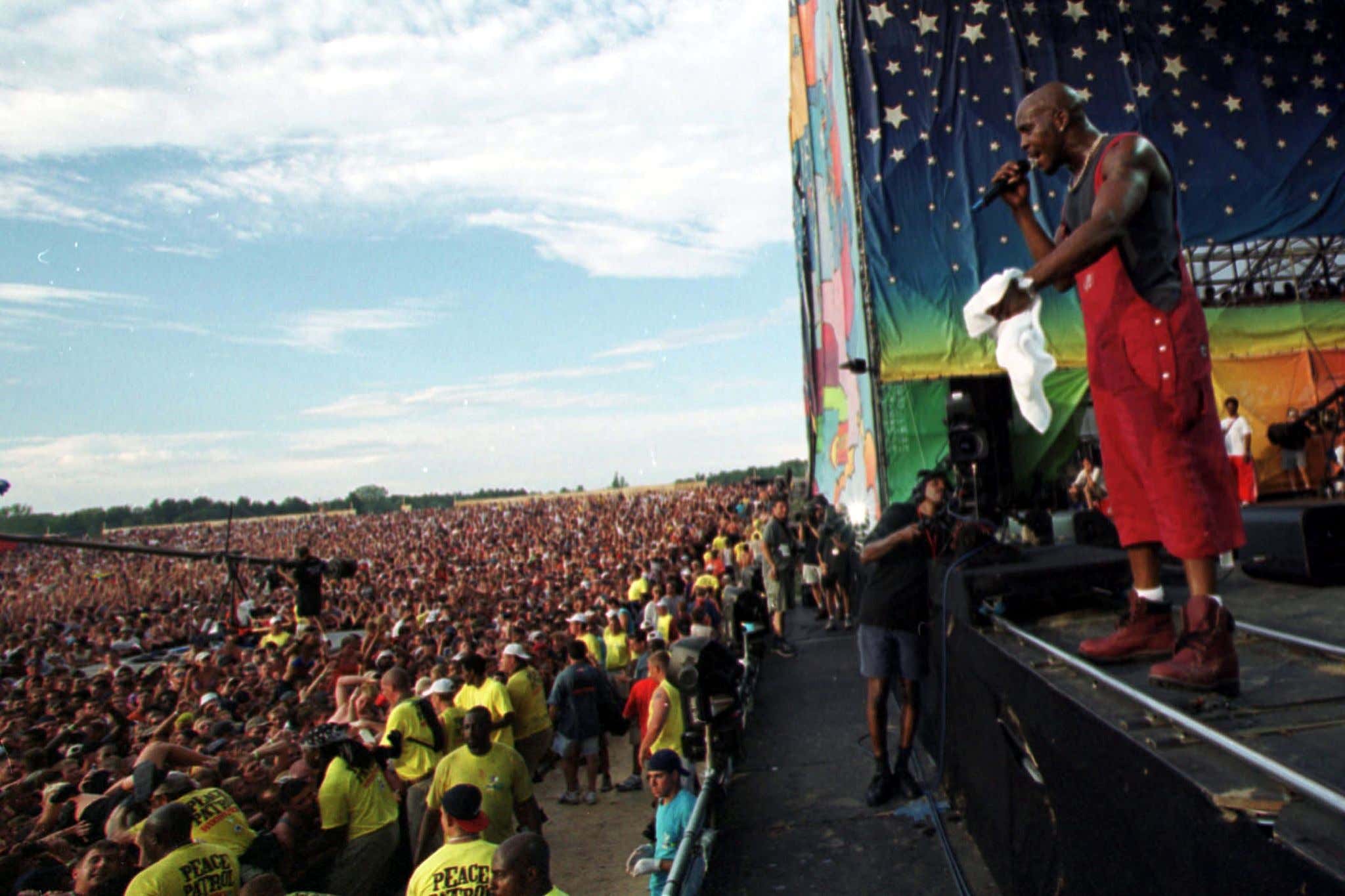 Rest in peace to Earl Simmons. DMX is maybe my favorite rapper of all time. The passion, the persona, the fire, the style, and the music was unlike anything I've still ever heard to this day. I know I wasnt exactly his target market, but the dude was such a force, he transcended all race and socio economic bullshit. I could write thousands of words on his music alone. From his rawest of shit like the Dark and Hell is Hot Intro to the softer side of Slippin and Hows It Goin Down. I could dissect his highs and lows of just his music for hours. But I'd rather share the memorable moments both in the music industry and out of it. The stories that seemed like urban legends. The tales the separated him from everyone else. The stuff that made him such an icon. These are my favorite moments of his.

DMX performing at Woodstock 99 in the red overalls for over 200,000 people

Posting any variation of "Remember when DMX performed for EVERY PERSON ON EARTH/AN ENTIRE CONTINENT/A SMALL COUNTRY/etc etc!?!?" was a classic play on social media. It hit every single time. People literally as far as the eye can see barking and growling. If you had to capture how popular X was with one scene, it was this one. 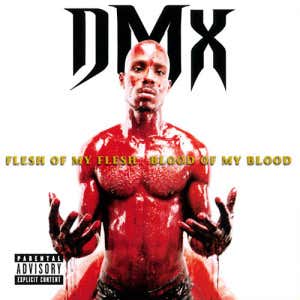 Urban Legends - Label executive Lyor Cohen was willing to put Def Jam’s money up to find out. So Cohen made a deal with DMX—finish another album in 30 days, and get a one million dollar bonus. Without blinking, X accepted the challenge, and his team got to work. And ultimately—after a tireless month of recording and mixing new records in Yonkers, Manhattan, Miami and Los Angeles, plus re-mixing leftover IDAHIH standouts—DMX’s follow-up LP was completed. In a 2016 interview with The Fader, DMX admitted the million dollar bonus was the source of his motivation for Flesh of My Flesh, Blood of My Blood. “That was the whole drive. I wanted to get that bonus. So I wasn’t playing with that whole studio shit. I wanted to get it out. The first album had 19 songs, so I already felt like I was cheating a little bit by giving them less songs than on the first one.”

DMX putting out Dark and Hell is Hot and Flesh of my Flesh in a 7 month span was one of the cockiest moves of all time. Thats WAY up there on the all time flexes in my book. Athletes, entertainers, fighters, whatever. Dropping those 2 albums in that short of time and absolutely OWNING 1998 was pure dominance. Look at the rest of the albums that dropped that year:

Aquemini, Vol 2 Hard Knock Life, Miseducation of Lauryn Hill, Capital Punishment, 400 Degreez, Moment of Truth, Black Star, Don Cartegena, The Love Movement, and about a dozen other classics…and it was still NO DOUBT that the year belonged to DMX. Learning many years later that it was all motivated by an under the table million dollar bonus just makes it that much better. X finishing an album in 30 days is hip hop's version of Happy Gilmore's "I'll just beat em now." You need a sophomore follow up? Gimme a few weeks.

DMX, Canibus and Noreaga freestyling on hot97 with Funk Flex

In 1998 it was borderline impossible to assemble a hotter trio than DMX, Canibus and Nore. The only thing that maybe would top it was Jay Z Ja and X - the Murder Inc super group that never got off the ground. But when X Canibus and Nore went on hot97 and spit “freestyles,” which we would eventually hear as studio records on X’s first and second albums, it was fucking insane. I remember hearing the IDAHIH intro, choosing to believe it was off the top of his head, and knowing he was about to turn into my favorite rapper ever.

DMX saying he would beat up Drake in an elevator, Hates everything about him

DMX is truly, honest to god, the worst driver in the history of vehicles. Tiger Woods gives him a run for his money, but DMX takes the crown in my eyes. Just an endless amount of arrests and accidents and incidents, but none greater than when turned the sirens on and asked another civilian for his ID. X demanding you respect his authority like fucking Cartman. I know the DUIs and the erratic behavior behind the wheel really isnt a laughing matter, especially considering how it all ended in tragedy. But you cant tell the tale of DMX without the FBI impersonation incident.

DMX trained his dog to ad lib during his battles

DMX went on Drink Champs himself and said it was just an urban legend. That he never trained her to do it repeatedly. But that was something that did happen when he was on the corner rapping. So maybe its not a thing that happened every time he was battling, but even if that one instance did happen…MAN whatta moment. Just think about that whole scene - DMX on the corner freestyling, battling some of his competition on the block, his pit bull on a chain leash, growling at his opponent - and X calmly says "Chill ma, let me get him." Fucking straight out of a movie.

Saddest part of DMX dying was that it actually seemed to be at his healthiest in years during the weeks and months just prior to his death. When he appeared on Verzuz, he looked like he had put on significant weight, which is always a good sign for people struggling with addiction. He seemed clear eyed, he seemed lucid. Not all choppy and jittery like he seemed when he was really using. When X was going through his heavy heavy drug use phase, it was always almost like he was a video game glitching. Stammering and speaking in short bursts while trailing off. But Verzuz he was totally with it. He appeared to be at his BEST as he was dancing, singing, vibing, and just straight up smiling. Which brings me to…

In X's own words, he never smiled for pictures. We know he regards himself as the best rapper of his time (Charlamagne: OK so which rappers impresses DMX right now?" DMX: "Me.") So to watch him admittedly geek out over meeting his childhood rap hero was such a cool departure from the usual rock hard front.

The opening scene of Belly

I know DMX had a pretty solid movie career as far as crossover artists go, but I dont think anybody is putting his acting career up in the Pantheon of Hollywood. But that being said, Belly was a phenomenon. The cast of all star rappers all being in a real movie…the soundtrack…Hype Williams basically making a music video into a full feature film…the all white posters and album covers…….

and the black light opening sequence of the movie. I dont remember much else about Belly and DMX playing Tommy. But I do remember being WILDLY uncomfortable at the Cross County Multiplex as one of the only white people in the theater. I felt VERY unwanted. But that black light scene with Soul II Soul playing and the robbery going down…pretty fucking awesome for 14 year old me.

Its probably the rarest side of DMX (at least, that we got to see as fans), but occasionally we saw DMX the goof ball. He was a bad motherfucker, an incredible MC, an actor, a preacher, a father, and we often saw all these sides. But every now and then he was clowning around and having fun with shit. Like singing Rudolph or impersonating Omarion: 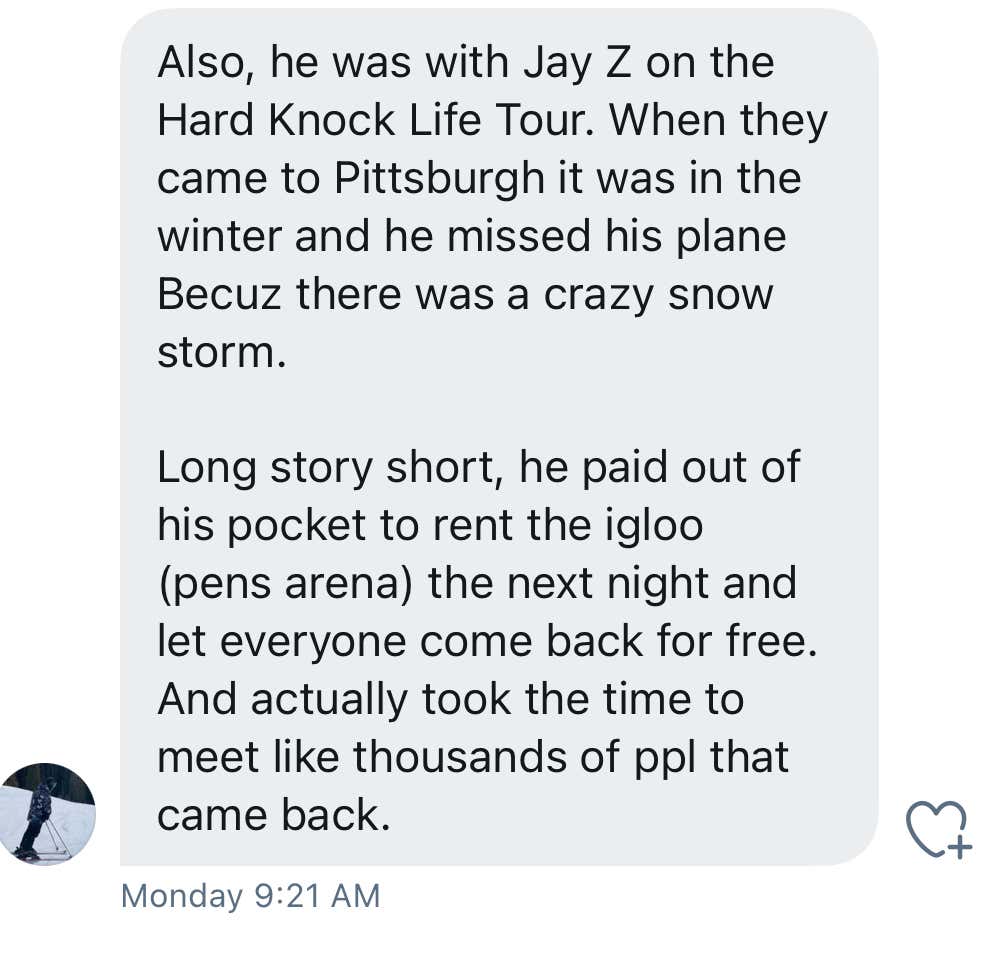 There's been a lot of great stories about the softer side of DMX coming out during the week after his overdose. The most prominent being the Twitter thread from the woman and her daughter who X invited to his concert after the sat next to each other on a flight and became friends. But this DM I got from old school OLD SCHOOL Stoolie Goddy77 is maybe the best DMX concert story I've heard. I tried to look it up and find some more details on this happening, I didnt find much. But one of the unfortunate hallmarks of DMX later in his career was that he was a flake for his appearances and concerts. But I choose to remember the DMX who was generous with his fans like that night in Pittsburgh.

And finally, my own personal experience - the time DMX and the LOX tried to hold a free concert in Mount Vernon that ended up in total disaster:

The year had to be 1998, because I remember being PUMPED to see DMX live, but he couldnt have been at the peak of his popularity because they were still trying to do a free concert. Memorial Field on Sanford Blvd in Mount Vernon, X's hometown. I believe the LOX were there as well. Yonkers and Mount Vernon coming together for a free concert in Money Earnin. I remember being 1 of like 3 white people in the whole general admission, standing room only set up. I remember there were BABIES there. I watched someone shotgunning weed smoke right into their small child's face. It was a SCENE man. I dont think X ever took the stage that evening. I dont think anybody did. The hometown crowd was restless and excited and frustrated. Fights broke out. Things got unrul. I just remember running out of there after the police starting breaking things up and it was a full blown stampede out of there. I would have preferred to get to hear Get at Me Dog and Ruff Ryders Anthem and Hows It Goin Down but having the memories of being like a 13 year old white boy running for his life in Mount Vernon is equally as cherished.