If you guys haven't seen, RnR fighter Jose Canseco tweeted last night calling out a party in LA involving a bunch of Barstool people. Fans had no idea what he was talking about, but I'm here to tell the full story about an infamous night in Los Angeles that Stoolies never found out about .... until now.

It happened during our Christmas break just over a month ago. It was the week between Christmas and New Year's, and with the week off, a bunch of us decided to fly out to LA for a few days and one massive party. We were able to privately rent a club out for the night to skirt around COVID protocols. Were we breaking quarantine restrictions? I guess so. But we work for Barstool fucking Sports and we do whatever the hell we want.

Not everyone made the trip out to LA. The always busy Erika wanted to use the break for some much needed downtime. Big Cat, KFC, Large, Clem, Chaps, and others didn't want to leave their kids. Kate obviously couldn't make the flight out with her pregnancy. Rone, Ohio's Tate, and Jerry Thornton took a separate boys trip to Nashville for the weekend and did their own thing.

Never one to turn down a party, Dave did make an appearance. But as the boss, he never likes to stay long at these functions. To make matters worse, Jordie could't make the trip (family stuff) and that's who Dave spends most of his time talking to at these things, so Dave left even earlier than usual.

It was still a pretty epic night.  I'll be honest, my memory of it all is pretty hazy. We all agreed we wouldn't talk about it publicly, but with that Jose Canseco tweet, I guess the cat's out of the bag.

INSIDE THE SECRET BARSTOOL PARTY OF THE CENTURY 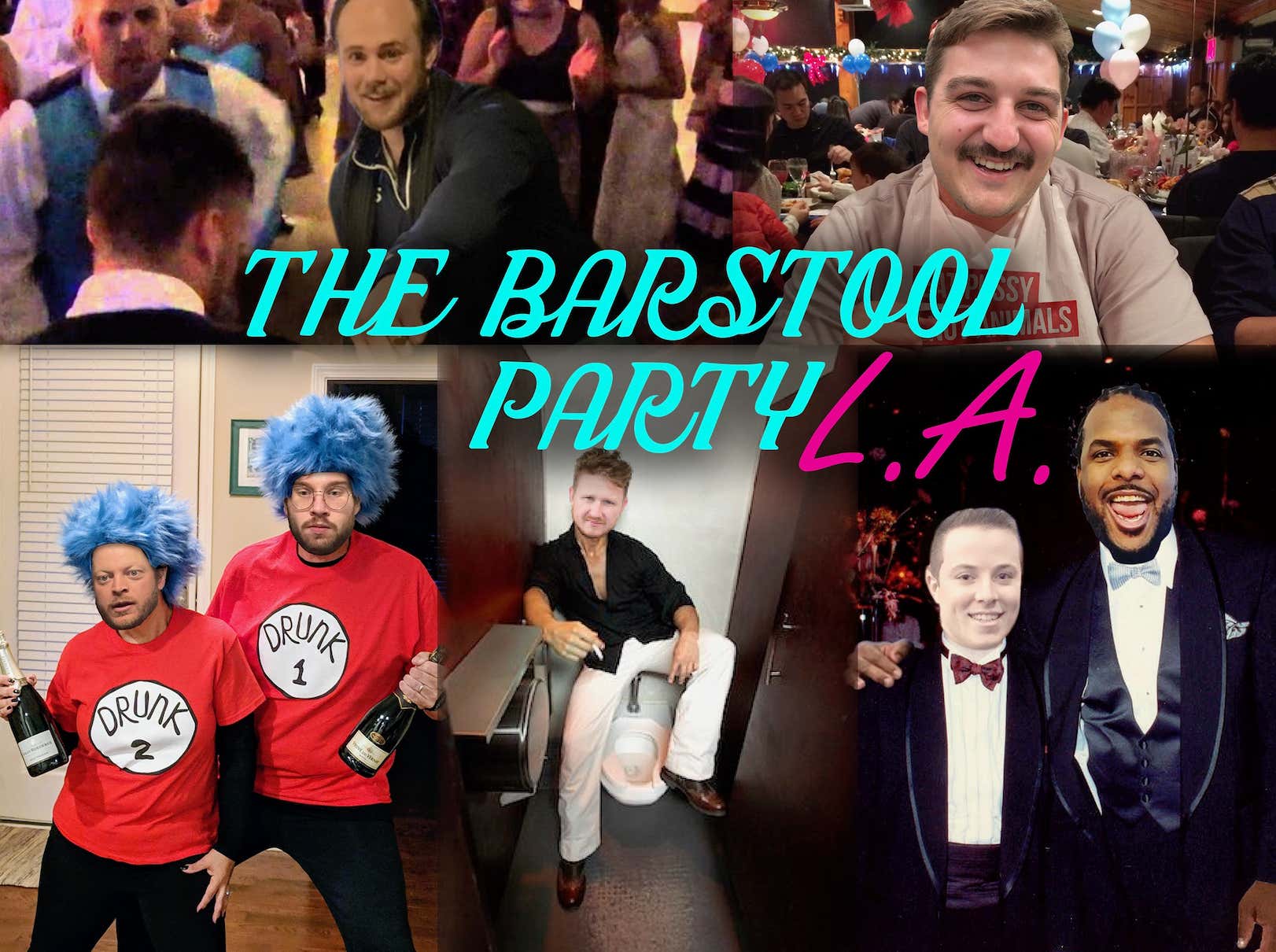 -Gaz and I were working door duties for the night. While it was mostly just Barstool employees, we were letting select girls, celebs, and others in. We separated the line into three separate groups: National smokes, local smokes, and what we just called ... "submissions."

-The doors opened at 9 PM. Claiming that he wanted to arrive "fashionably late," Jeff D Lowe strolled in at 9:04 PM wearing a Browns quarter zip and khakis. He was our first guest but didn't stay long. He complained the music was a tad bit loud as he tried to pepper a few smokes with trivia questions. When one girl could only name 12 of the top 25 candies sold at suburban Targets (per target.com), Jeff D knew he was in the wrong crowd and left for the evening.

-The usual duos then strolled in. Hank and Ria. Jetski and Daniela. Marty and Dana. Ben Mintz and Fran. I don't think a lot of people know this, but Ben Mintz and Fran are actually roommates. Fran's roommate moved home due to COVID, which opened up a bedroom just as Mintzy was moving into the city. She gave him a good rent discount, and since Fran spends most of her time at her boyfriend's place anyway, Mintz basically has the pad to himself. They do, however, have a standing agreement to watch The Masked Singer together every Wednesday at 8.

-Speaking of pairs, the dynamic duo of Nick and Riggsy arrived together, and they were the life of the party as always. They wore their matching Cat In The Hat inspired "Drunk 1" and "Drunk 2" t-shirts and tore shit up. They were pouring shots into each other's mouths all night, grinding on chicks, and standing on tables as they popped champagne bottles. They also cleared out the floor for their coordinated dance battle to "Fancy" by Iggy Azalea. They both won.

One ugly spot of the evening was when Riggs tried to strangle a bartender for giving him too much ice in his drink. Nick held him back though. He's the only that can talk some sense into that hothead. They eventually left together with a couple of chicks for what I presume ended in a classic "Nicky and Riggsy Foursome." Those guys do literally everything together. 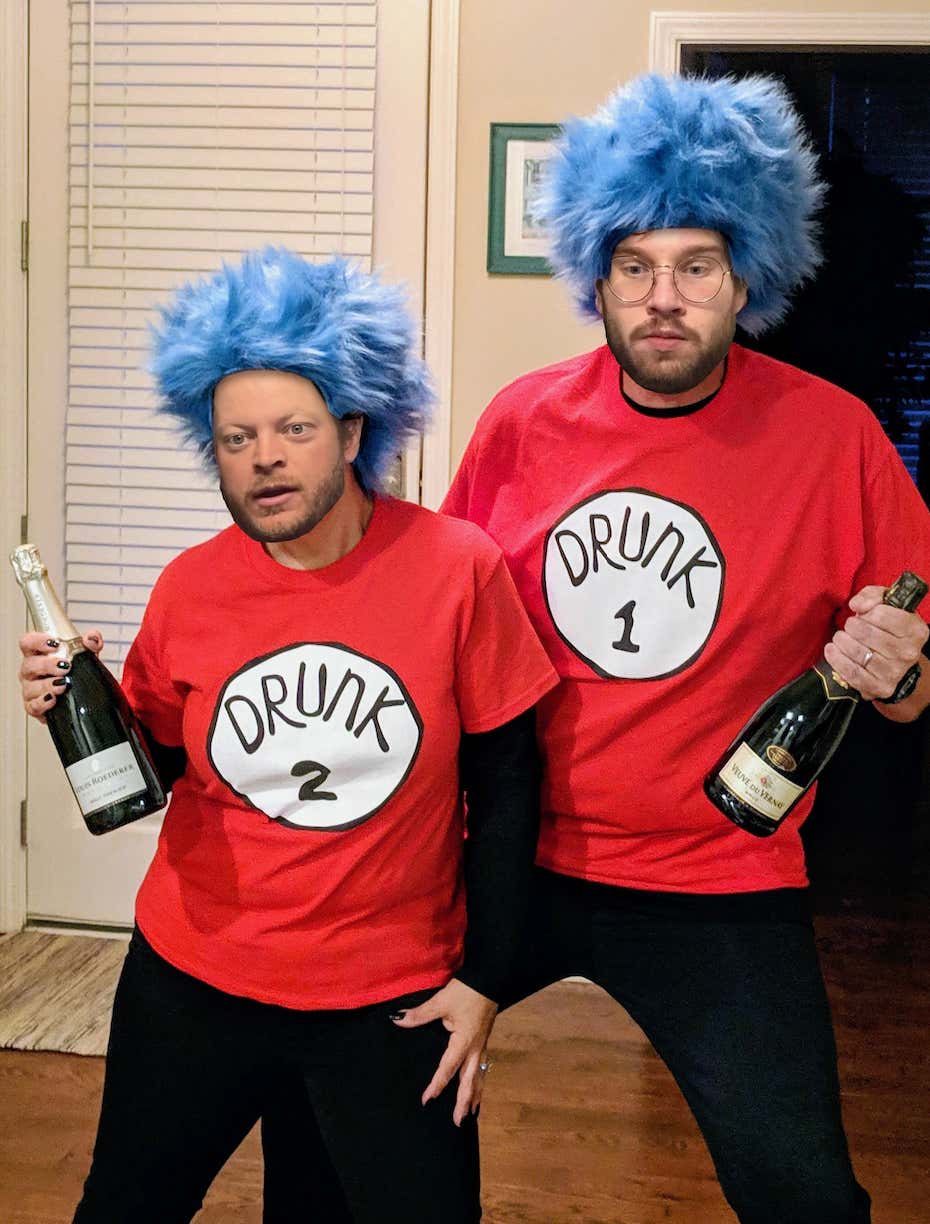 -Somewhat surprisingly, Greenie and Reags both made the trip out. They both brought their laptops in case there was any breaking news. Greenie did end up having to push out an emergency blog when Marcus Smart tied a career high with 14 3rd quarter points.

-Feitelberg was apparently in attendance, but he was barely seen all night. For some reason, he spent most of his time inside a stall of the guy's bathroom. Afterwards, he kept saying, "The floors here were so much easier on my knees than the ones at Hurricane O'Reilly's." Whatever that means. 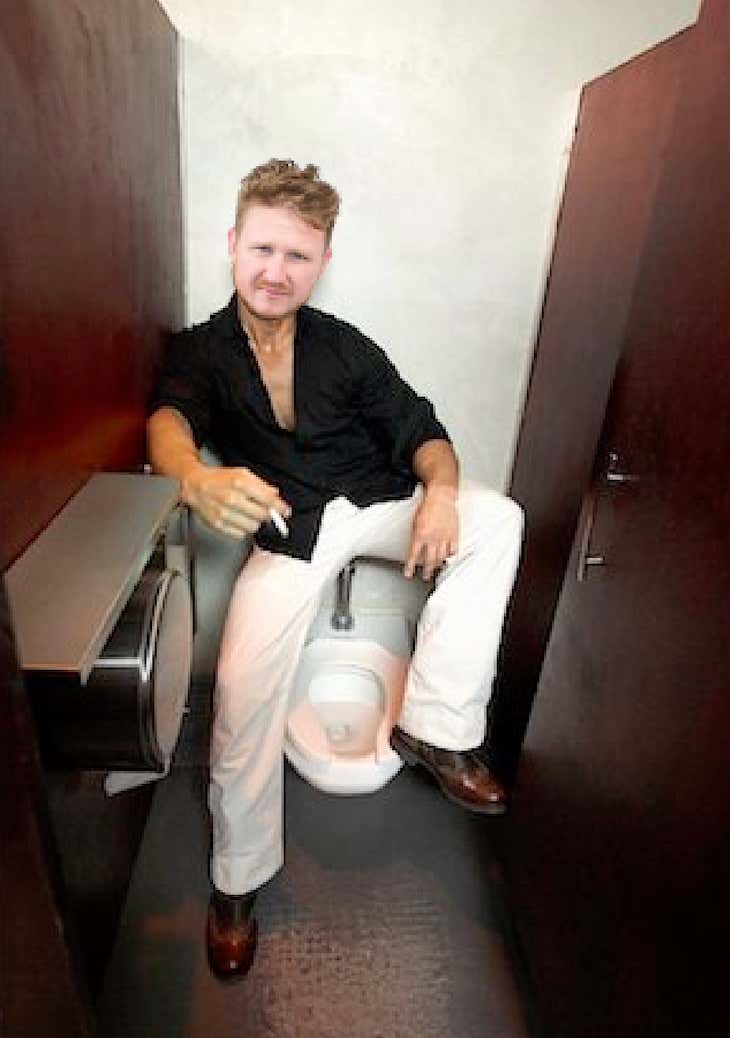 -KB tried to meet Feits in the bathroom stall at one point, but it became very clear that they had a massive mix up over the word "blow."

-Speaking of bathrooms, Youngstown Bob actually ended up working the night as a bathroom attendant in the ladies room to help out with amenities. Fix your hair. Spray some perfume. Pop in a mint. Have Munchtown Bob go to town on your pussy. The place had everything. 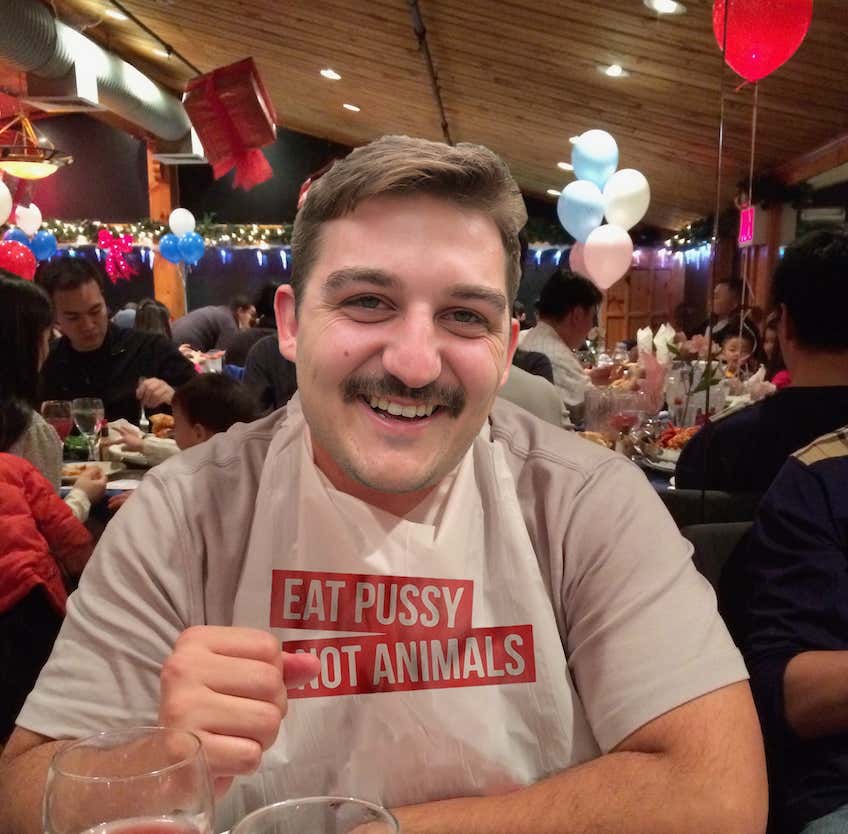 -Dante was fuming when his DJ set got interrupted with a 40 minute live performance from Tyler O'Day singing his Christmas album "The 12 O'Days Of Christmas."

-Jeff Nadu was excited to finally get the chance to attend a Barstool event, as Rico Bosco planned to stay home. But once Rico got word that Nadu was about to walk in the door, Bosco found a way to somehow break the space-time continuum and get from Staten Island to Los Angeles in a single second. Nadu was promptly sent back to Philadelphia.

-People were getting worried when they hadn't shown up for awhile, but eventually The Three Musketeers rolled in: Wallo, Gillie, and Big T. As a big government guy, Big T was a little disappointed we were breaking the law, but once we got a few shots in him, he let loose and just started talking about how badly we need socialized healthcare.

-Nate was waiting on line for a drink and getting annoyed by the wait. He screamed that he was second in command at the company and should move ahead of everyone. This led to confused looks by the two people ahead of him: Peter Chernin and Jay Snowden.

-White Sox Dave spent most of his night talking to an absolute smokeshow. He said they really hit if off and that she kept bringing him drinks all night. It was a cocktail waitress. He left his number for her, but he hasn't heard back. Ever the good friend, Smitty actually flew back to LA the following week to confront corner ask the waitress about Dave.

-Here's another little Inside Barstool thing that a lot of people don't know. Willie Colon and Frankie Borrelli actually do a magic act together (think Penn & Teller). They wore their matching tuxedos and brought their usual tricks. Unfortunately, they weren't getting the attention they usually do, as Jim Florentine was stealing the show with his never-before-seen break dancing skills. 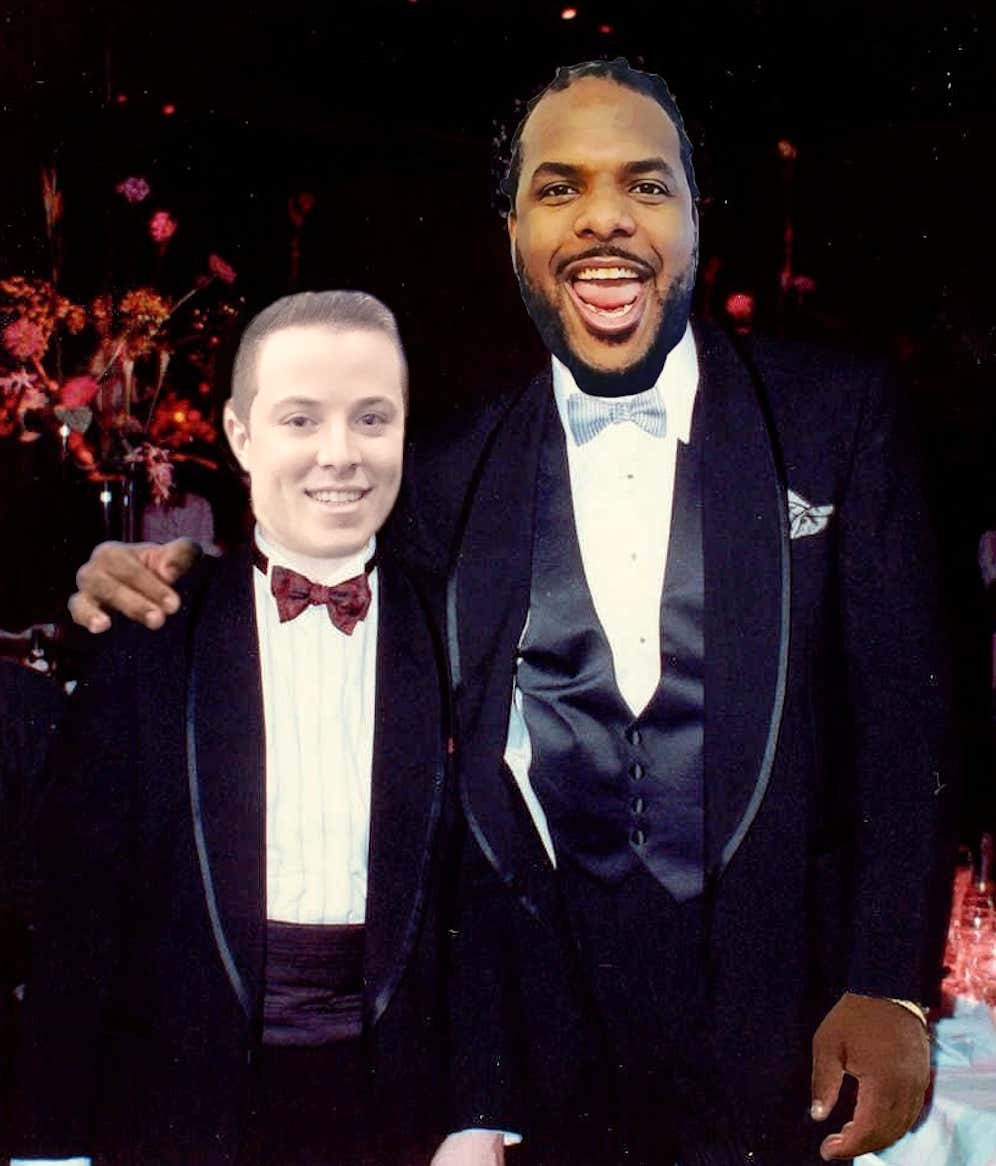 -Glenny used the night to replace the epic "Glenny Ball" that never was. However, he was a little disappointed when neither Mo Vaughn nor Kevin James showed up despite his persistent DMs.

-It wouldn't be a Barstool party without confrontation. Steven Cheah questioned Caleb about a Week 14, second quarter read Mitch Trubisky made on a play action call. Caleb gave Cheah a swirly in the bathroom.

-Kayce was in attendance, but she was distracted the whole night trying to think of the perfect Instagram caption for the post of her party outfit. She ultimately landed on, "This is a whole entire mood" with four fire emojis.

-Brianna Chickenfry and Frank The Tank kept to themselves most of the night. They're such good friends that sometimes they just completely isolate themselves from everyone else.

-Being that he's under 21, Lil Sasquatch tried to use a fake ID to get in, but it wouldn't scan. When he wasn't allowed in, he threw an absolute fit. "Do you know who the fuck I am? I'm Lil FUCKING Sasquatch. The King Of New York! The Bryce Hall of the East Coast! You ain't gonna let my pretty boy swag in the building???" Everyone was pretty relieved when Vindog threw that diva out on the street. We literally all hate him.

So that's the full story of one epic night in Los Angeles. I don't know who the leak was, but Jose Canseco did have good intel. But a rat is a rat. So let's hope Billy Football knocks him out tomorrow night at Rough N' Rowdy. BUY HERE.