Last year was our first year doing our #EnEffElDraft show and it was a huge success. We had done a ton of prep work, gotten highlight rights, Jeff D. Lowe made all the graphics, Blattman did an incredible job producing, the talent booking team had filled up the show with a ton of big name guests, and I thought we put on a very good show. I had even been contacted by a ‘source’ who was a Stoolie that worked in the league and was willing to tip picks so we could break news live on air. It started off going swimmingly as NFL teams have a news wire that's more real-time than regular people watching on cable or following on twitter. One of the more memorable moments of the night last year was after giving several correct picks to our group via text, the source gave an incorrect pick ON PURPOSE and gave me one of the more deerier deer in the headlights look you'll ever see. 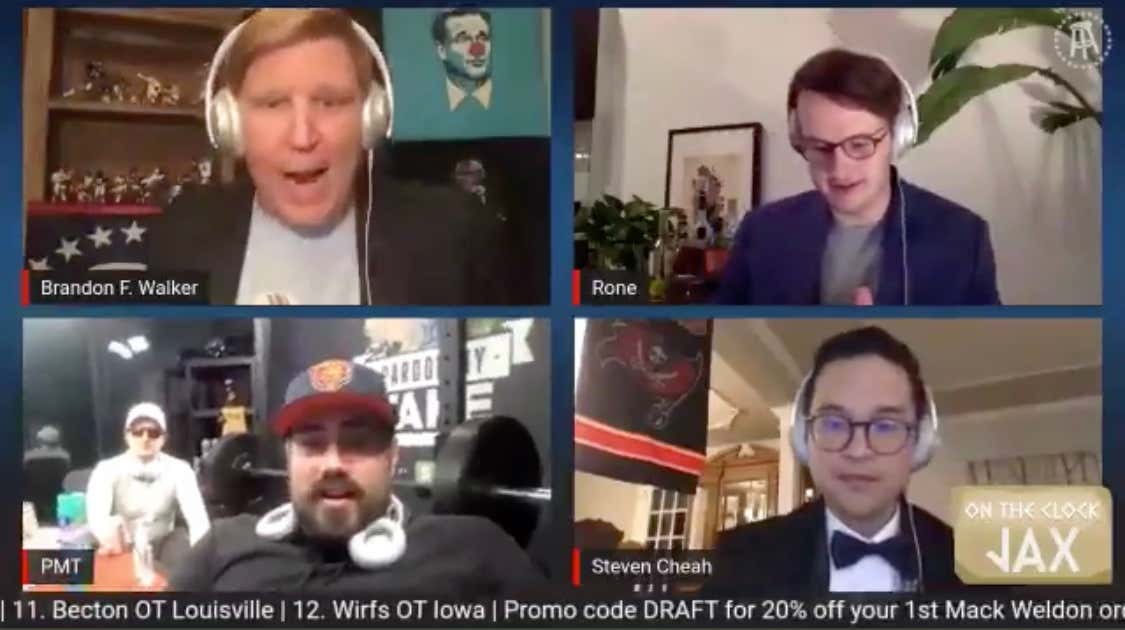 Dave even said I embarrassed the entire company with the gaffe.

I'll admit, I hear some things during the year or in Free Agency and have zero desire to break news. I'm a complete lock box and feel like I've earned the reputation as a trusted media person to a few people in the league. But during the Draft, all bets are off while teams are on the clock and I love am addicted to tipping picks and breaking news before the mainstream networks say it. ESPN and the NFL Network even helped us out this year by agreeing to a truce to not leak picks early. This would be Barstool's competitive advantage.

Tipping picks this year would be harder as most team employees were in the office as opposed to last year when everyone was drafting at home so with 36 hours til the draft we still didn’t have anyone on the inside to tip off any picks. That’s when this sinister plan hatched by Big Cat and Jeff D. Lowe and Rone began to unfold. Rone threw out on our show group text that our old comrade, Office Manager Brett, who had interned with the Denver Broncos before working at Barstool had a guy he knew from his time in Denver that was a big Stoolie and willing to tip some picks. 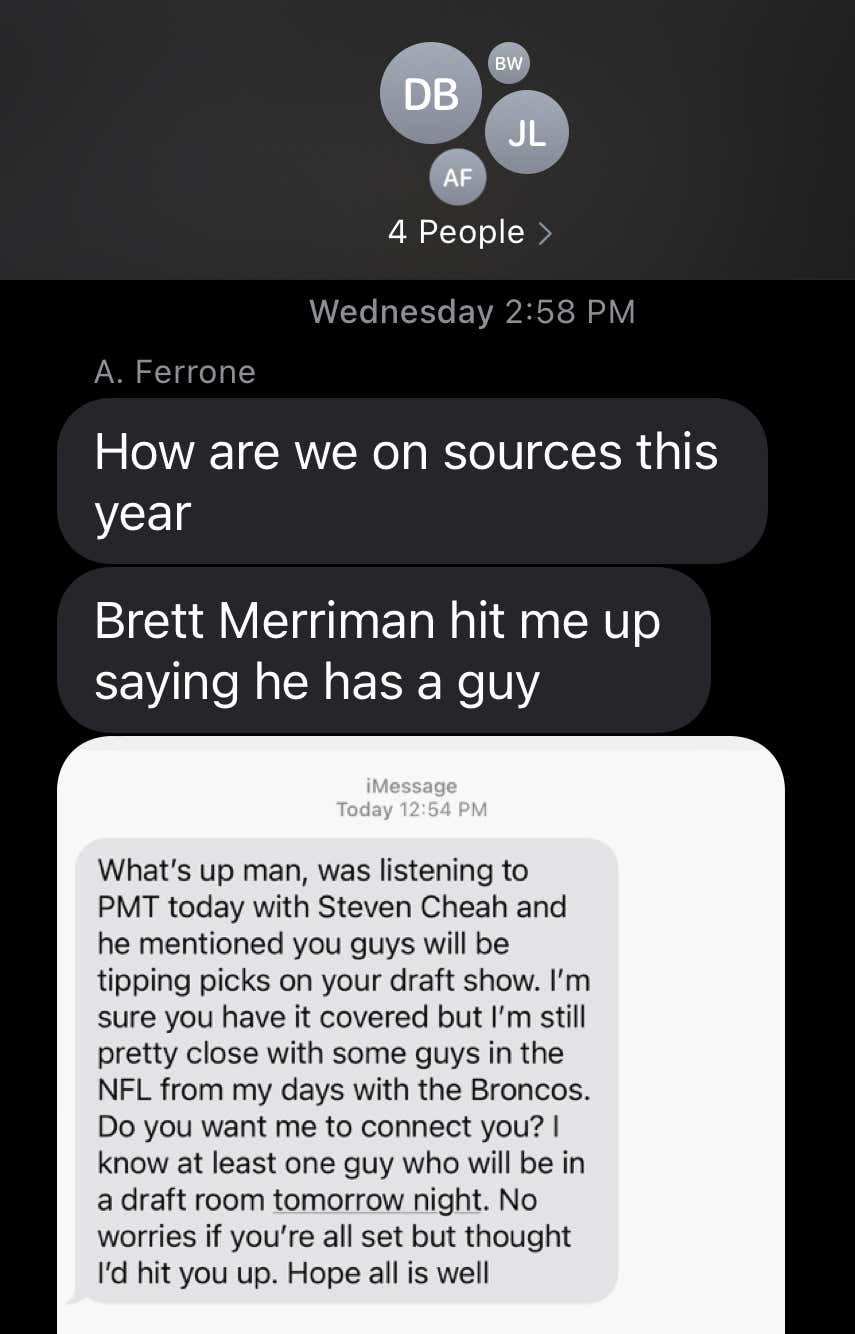 With Rone being the trickster that he is, I didn’t trust this lead one bit. So I decided to text OMB myself to get the guy’s info and control the lines of communication. 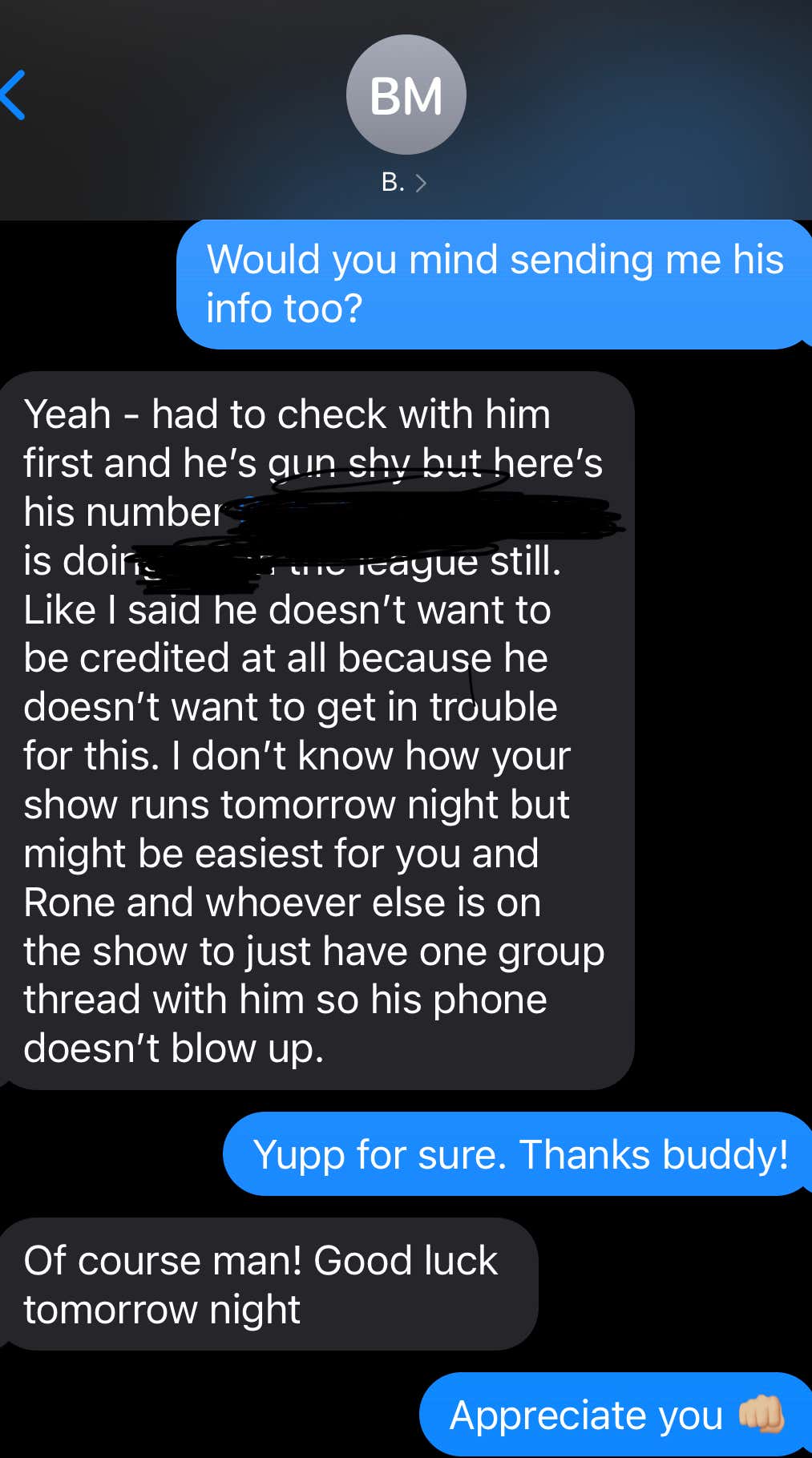 Things seemed normal so far, but when I reached out directly to this ‘insider’, they had a New York City area code (not a dealbreaker, but fishy), weren’t very responsive at first, and didn’t give me the best feeling. 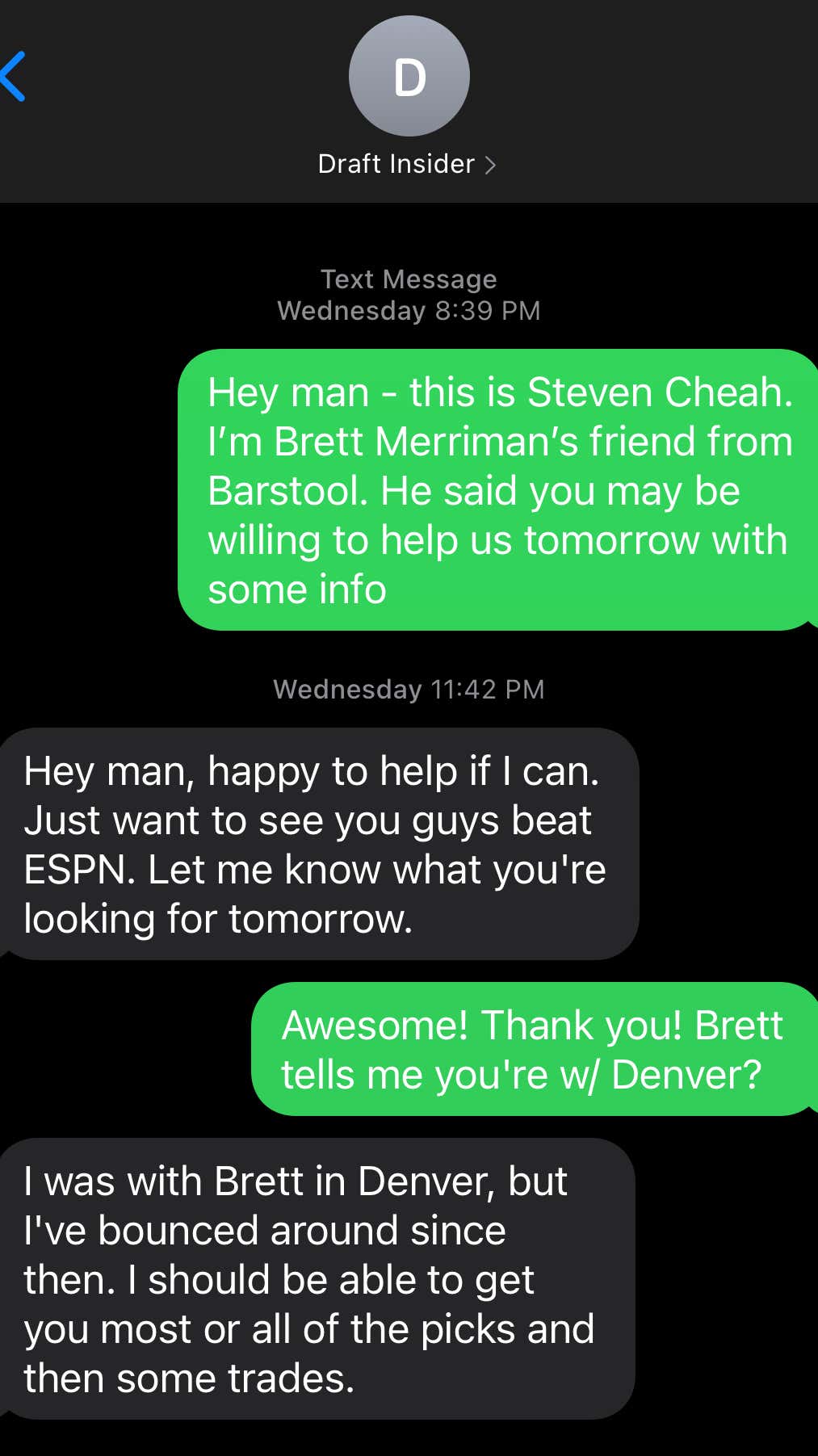 But I’m a company man and was up against the clock as far as how soon the Draft was going to be, so I went with the ‘insider’ but held on to some skepticism.

So I started a group chat with everyone from the show and noticed nobody was interacting with the ‘insider’. Very odd as last year we were all firing off questions to our source. I had been hearing things about Aaron Rodgers for a good portion of the day and wanted to vet it with this ‘insider’. They provided a pretty fair answer saying it was above their paygrade and weren’t involved in those meetings. Looking back, guys like this at least like to weigh in on their thoughts, but it wasn’t a blocker for me at that point. Moving forward but still skeptical.

The Draft got underway and this ‘insider’ was tipping everything. The first two picks were chalk, but the 3rd pick very much was up in the air and they had Trey Lance earlier than Schefter and the TV Networks. So some trust started to build. 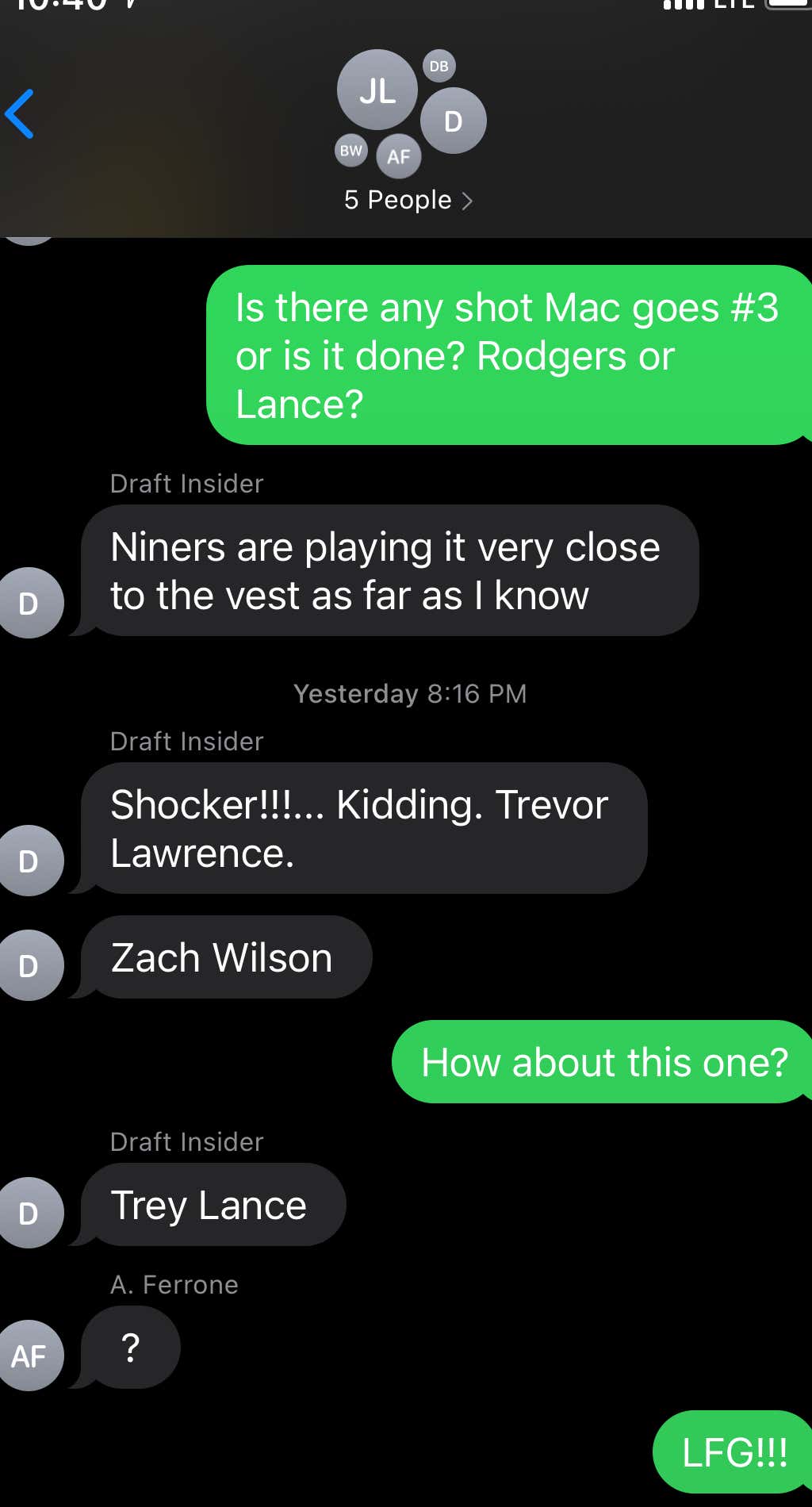 Kyle Pitts, Ja’Marr Chase followed before they were public and were rolling. The Dolphins were on the clock and it was a bit of a mystery as to where they’d go with both Pitts and Chase off the board. The Fins selected Waddle and I refused to break it on air. It wasn’t just that Miami was on the clock, but everything about it was Fishy. In the chat behind the scenes in the Streamyard, Blattman and Jeff D. Lowe were writing in all caps for me to break it. Brandon Walker is a Dolphins fan and was looking at the chat as well. I encouraged him to break it for fear of having egg on my face for a second straight year. He refused so I cautiously announced we’re hearing it’ll be Jaylen Waddle, but would work to confirm. Two minutes later on TV Jaylen Waddle is walking up to the podium which was a surprise pick. At this point, I’m in hook, line, and sinker. Every pick this ‘insider’ has given us has been right and very early! And again, breaking news during the Draft is so addicting. It’s a high even a small box of yogurt covered pretzels can’t beat! 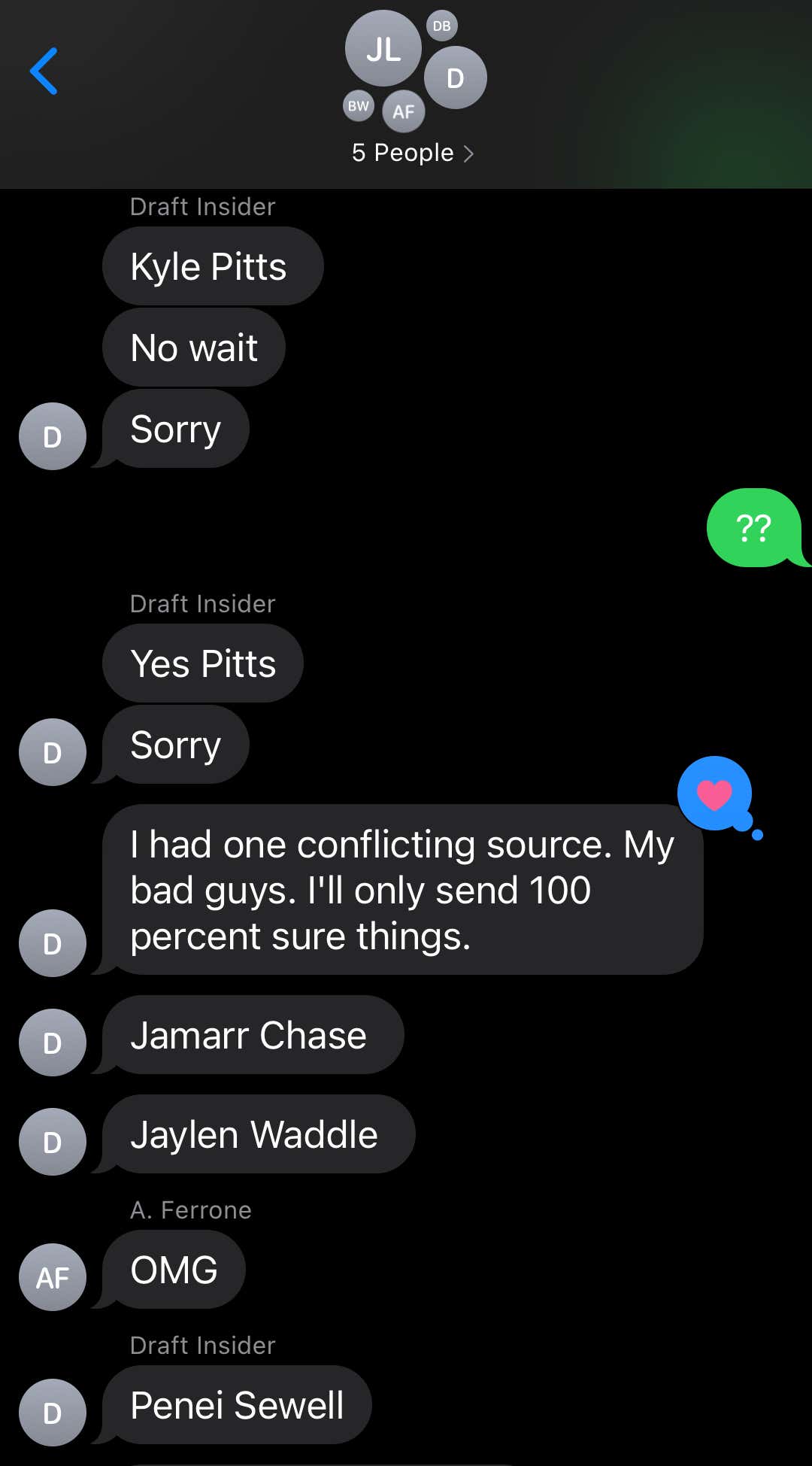 The 7th pick was basically ran up to the podium with the Lions taking Penei Sewell but this ‘insider’ has my full trust. The Carolina Panthers are now on the clock and Carolina native Caleb Pressley is on for the pick. Caleb and I have a long and tangled history of butting heads coming down to the fact he didn’t like me picking the Bears to regress in 2019 after having a big year with his best friend Mitchell Trubisky at Quarterback. Caleb played football at a very high level and at the end of the day doesn’t respect my football acumen, which was not gained between the white lines. So he was the perfect foil for me during this ultimate climax of the prank.

The situation was also looking quite favorable for my take that DeVonta Smith wouldn’t be a top 10 pick. Based on the Quarterbacks I expected to go and the draft order with the Panthers, Broncos, & Cowboys at #8, #9, & #10, it was looking like I was about to dunk on the future Masters Champion that disagreed with my take calling it idiotic back in January. All these things combined were the perfect recipe to get me to peak cockiness, so when we got the text from our ‘insider’ saying Justin Fields was the pick, I jumped at the chance to break the news.

The guys let me peacock for a solid minute as the news slowly came across the TV that Jaycee Horn was actually the pick, not Fields.

It was at this point I had realized I had been duped. The ‘insider’ was not real and Caleb was taking diligent notes on a real-time post-mortem of the events for our Draft department. It was at this time that Jeff D. Lowe put Big Cat on the screen revealing himself as the true mastermind!

It was a truly diabolical plan that played out ever so perfectly. So much so that I can’t even be mad, I just have to respect it. Well played gentlemen! I’m glad it was a memorable moment, albeit at my own expense again. It was still a blast doing the show and I am already looking forward to next year’s! But until then, let’s enjoy the rest of the NFL Draft