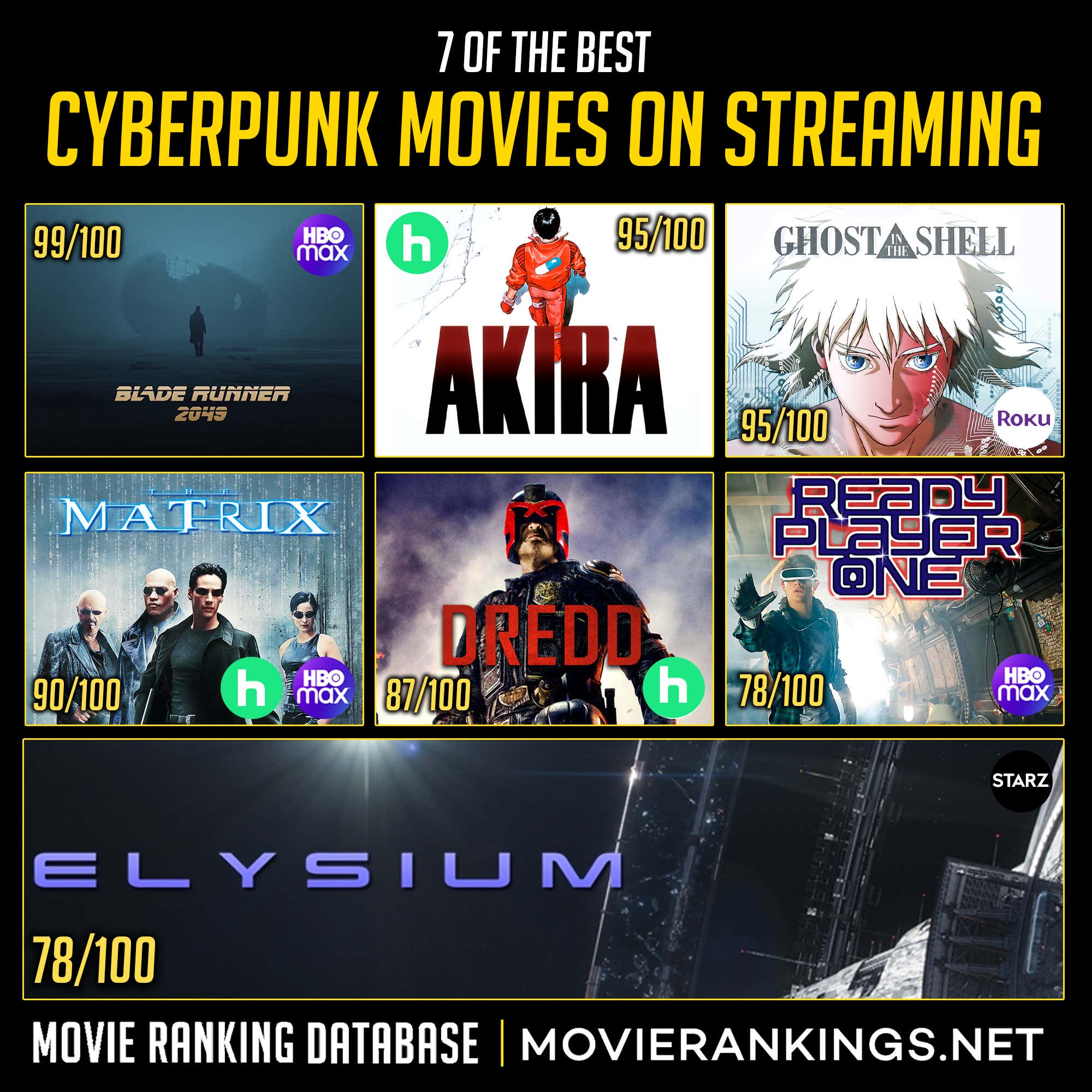 I'm in the middle of watching the new Matrix movie on HBO Max, so I figured why not give some suggestions for those of you looking for something similar. For those of you that may not be familiar with Cyberpunk beyond the poorly received game, just think "High tech, low life". Basically futuristic setting but without the utopia living that we think comes with it.

Thirty years after the events of the first film, a new blade runner, LAPD Officer K, unearths a long-buried secret that has the potential to plunge what's left of society into chaos. K's discovery leads him on a quest to find Rick Deckard, a former LAPD blade runner who has been missing for 30 years.

The first Blade Runner movie is a benchmark for both Sci Fi and cyberpunk. The late sequel takes what was already great about that movie and did it better.

A secret military project endangers Neo-Tokyo when it turns a biker gang member into a rampaging psychic psychopath that only two teenagers and a group of psychics can stop.

This movie is considered one of the best animes ever made by anyone with a brain and for good reason. It is incredibly made and really enthralling. It also has a fairly large influence on American pop culture as one of the first major Cyberpunk genre movies:

- It's one of Kanye's favorite movies and the direct inspiration for his 'Stronger' music video. It also is shown in the Michael Jackson 'Scream' video
- The Matrix, one of the biggest scifi movies ever made, is inspired almost to the point of ripping off both Akira and another anime, 'Ghost in the Shell'.
- Stranger Things took a lot of inspiration from Akira, specifically the character of Eleven in the show vs Tetsuo in the movie.

In the year 2029, the barriers of our world have been broken down by the net and by cybernetics, but this brings new vulnerability to humans in the form of brain-hacking. When a highly-wanted hacker known as 'The Puppetmaster' begins involving them in politics, Section 9, a group of cybernetically enhanced cops, are called in to investigate and stop the Puppetmaster.

(Note this is the anime and not the trash ScarJo version). Like with Akira, you will see a lot of similarities to future American movies that ripped this off. It's a cool, futuristic plot that explores humanity, what it means to even be human, and more. AND, it has some really well animated action and violence to boot.

Set in the 22nd century, The Matrix tells the story of a computer hacker who joins a group of underground insurgents fighting the vast and powerful computers who now rule the earth.

This one needs no introduction or pitch.

In the future, America is a dystopian wasteland. The latest scourge is Ma-Ma, a prostitute-turned-drug pusher with a dangerous new drug and aims to take over the city. The only possibility of stopping her is an elite group of urban police called Judges, who combine the duties of judge, jury and executioner to deliver a brutal brand of swift justice. But even the top-ranking Judge, Dredd, discovers that taking down Ma-Ma isn’t as easy as it seems in this explosive adaptation of the hugely popular comic series.

I recommended this last week and it happens to apply perfectly here.

When the creator of a popular video game system dies, a virtual contest is created to compete for his fortune

This might be stretching the usually dour tone that comes with Cyberpunk, but it is definitly high tech low life with an emphasis on evil overlord corporations. .

In the year 2159, two classes of people exist: the very wealthy who live on a pristine man-made space station called Elysium, and the rest, who live on an overpopulated, ruined Earth. Secretary Rhodes (Jodie Foster), a hard line government ofﬁcial, will stop at nothing to enforce anti-immigration laws and preserve the luxurious lifestyle of the citizens of Elysium. That doesn’t stop the people of Earth from trying to get in, by any means they can. When unlucky Max (Matt Damon) is backed into a corner, he agrees to take on a daunting mission that, if successful, will not only save his life, but could bring equality to these polarized worlds.

I'll go to war for any Neill Blomkamp movie not named Chappie. This one has a weird, but cool performance by Damon and an incredible villain performance by the underappreciated Sharlto Copley. By the way, the concept of Elysium is 1000000% something the billionaires of the world are considering. And only if they aren't already intro production on it.