Chiclets is taking over Minneapolis for the Winter Classic this year.  The Blues visit the Wild on January 1 at 6 pm CT,  but the festivities really start at Cowboy Jacks at 2:30 CT with a Spittin Chiclets Meet and Greet. Everyone has to come to hang out, there is no better way to shake off that New Year's Eve hangover than with a couple of Pink Whitneys.  Start your pregame with the crew and we can spitball about the bets that will crush the Barstool Sportsbook. 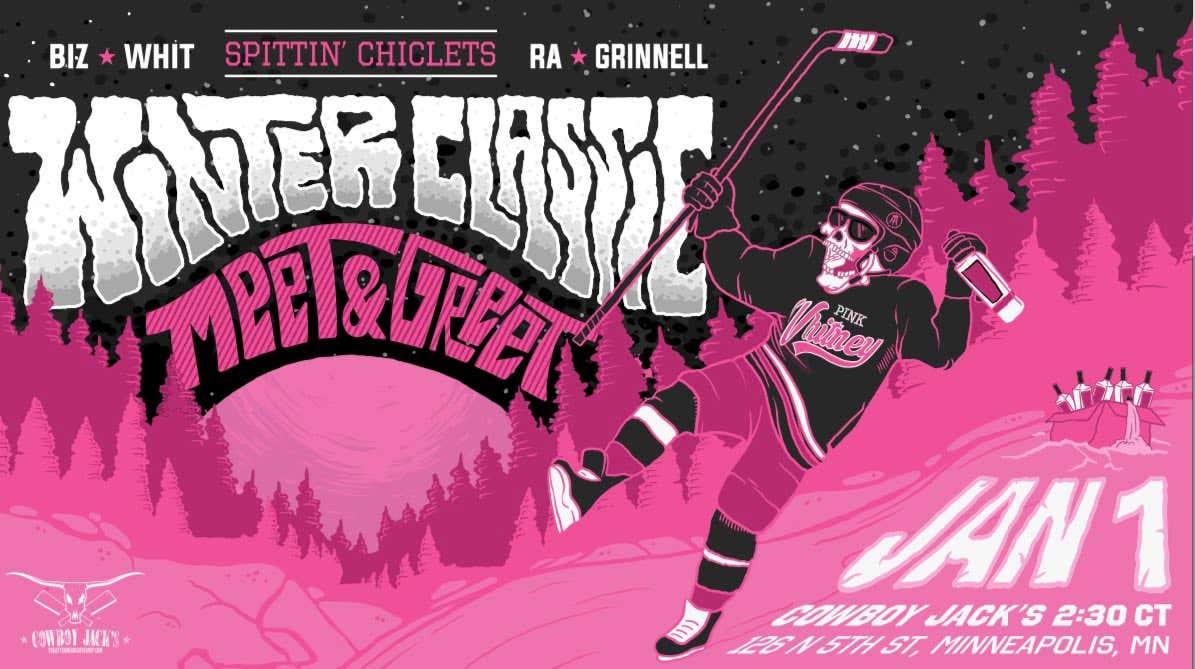 Here is a little history of the Winter Classic for the rookies. The first event was held in 2008 at Ralph Wilson Stadium (home of the Bills) in Orchard Park, New York between the Sabres and the Penguins. The NHL could not have picked a better city to host because the Buffalo fans are the most belligerent and thrive at games in the cold weather.  At the time, the Bills Mafia was not nationally known like today but I can't help to think that when 71,217 fans showed up for a hockey game it led to the BIlls fans improving their tailgate performances. Along with the perfect city they chose two perfect teams, the Penguins featuring Sid Crosby and our own Ryan Whitney. The Buffalo Sabres had a ton of exciting talent including Chris Drury, Tim Connolly, and one of the top goalies in the league. So we have the crowd, two great teams now we only needed a great game and boy did that happy.  The game was tied (#murleyspecial) and even the most novice of hockey fans knew how the game was going to end with 87 beating Ryan Miller in the shootout to give the Pens the win.

Twelve Winter Classics have been played with the most recent game played January 1 at the Cotton Bowl, where the home team Stars beat the Preds 4-2. The season before that the game was played in Notre Dame and is maybe the most important Winter Classic in Spittin’ Chiclets history because of the way the game ended. With the Bruins leading 3-2 late in the game the Chiclets Crew was happy with their Bruins ml wagers, but were greedy and wanted to cover the -1.5 puck-line!  When Marchand broke free and scored the 4-2 goal, the boys erupted and RA peered over to the Jesus mural on the Notre Dame King of Kings Statue after a few Pink Whitneys and blurted out “Puck-line Jesus, right there…”   After the video was released the term has been used by gamblers far and wide when hunting down that late -1.5 cover to crush the book. The reason Whit was yelling "Pastrnak, Pasta" is still unknown.

The history lesson is over and now on to this year’s Winter Classic, which is scheduled for January 1, 2022, at Target Field, home of the Minnesota Twins in Minneapolis, Minnesota. The NHL chose the Blues vs. Wild matchup for the 2021 Winter Classic, so just rolled them over to the 2022 Classic.  Once again the NHL comes out smelling like roses as this season the Wild are fighting for first place in the West and are considered one of the most exciting teams to watch in the entire league.  The Blues are always dangerous and are loaded with talent up and down the lineup which is going to make this a fun game to watch and any game is always better with some bets.

Grinnell’s Favorite Part Of The Game:  Jerseys that will be worn by each side.

St. Louis Blues:  Blue, yellow, and cream, modeled after the 1967–68 road uniforms of their inaugural season. Blues wore the blue version in the 2017 Winter Classic.  Binnington should get the start Saturday and has always played great in the big games.

Minnesota Wild: Green, red and white jersey was designed to show the rivalry of the Twin Cities and its legacy as the State of Hockey. The brown gloves and pants really bring an old-school feel to the uniform. It's a shame Spurgeon won't be suiting up for this game due to injury, he's a big part of this Wild team.

The Stats You Need To Know Before You Bet This Game:

Look for Part II of the preview as we get closer to face-off with Murls' Best Bet and all the info on the Spittin Chiclets Boosts at the Barstool Sportsbook that we will hammer for this monster game.