Well, that's terrifying. The thing is you can tell who was driving the safari got totally blindsided by the bull elephant who was off to the side of the road. Everyone was looking down the road then BOOM out of nowhere a gigantic bull elephant rolls up. I kinda feel like this was definitely very avoidable. I mean as soon as that elephant rolls up so close they probably should have backed away.

According to the narrator of the video, they were lucky that no other dangerous animals were around when they had to jump out of the jeep because they could have been nabbed by a leopard or a lion. The safari was being run by a group that helps train safari guides and drivers. It's kinda ironic that this is a class that people pay thousands of dollars for and these guys end up running for their lives because their instructor messed up. 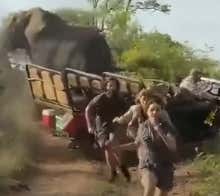