Back in late September news broke that Eminem was bringing his pop-up restaurant "Mom's Spaghetti" to life, permanently, in downtown Detroit.

Along with the infamous Paul Rosenberg, and the Union Joints Hospitality Group, Eminem had made "Mom's Spaghetti" a staple of various festivals he performed at, as well as a short pop up at the legendary St. Andrew's Hall, home of "The Shelter", where the infamous rap battles took place back in the day.

The marriage was too perfect. At least in my eyes.

You take Marshall Mathers, (number 3 on my famous best rappers of all-time list), Union Joints (the group behind one of my favorite spots, Vinsetta Garage, and spaghetti sandwiches (a leftover's delicacy growing up) you have a fuckin homerun.

And the marketing rollout was brilliant.

So I couldn't wait to get up to Detroit to try it for myself.

We reached out to the Union guys and they couldn't have been more accommodating. I drove up a few weeks ago, and invited Chris Castellani to come with me, but he was too busy doing a Venezuelan Double-A Rotisserie League Fantasy Draft (jk he was out of town), so it was just my trusted videographer Alex and I.

After a nice scenic tour up and down 8 mile for some b-roll footage we headed downtown. When we arrived, we parked right off Woodward, Alex set up his drone and began getting aerial shots. There was a construction crew on site that saw the drone, and my Illinois plates license plates, and asked me if we "came to Detroit for safety."

I liked these guys' style immediately so we started shooting the shit and they warned us that the President was in town and at a GM plant a few blocks away so we probably didn't want to be flying the drone around and piss off the FBI.

We packed up and headed to the restaurant.

Mom's Spaghetti is located directly across the street from Comerica Park, where the Tigers play. It's actually inside Union Assembly, a namesake restaurant from the Union Joints guys. It's 3 levels with a rooftop patio (that's very well heated) that overlooks the ballpark and most of downtown. And since you've got Ford Field and Little Caesars Arena not far away, it's the perfect spot to pregame for any Detroit sporting event. Especially now that Chelli's is gone.

As you'll see from the video, we got a behind-the-scenes view from partner Curt Catallo, Chef Chris, and Eminem's merch team and right-hand guy.

One of the coolest things about meeting everybody there was hearing the backstory of how the concept came about, and also just how hands-on Eminem and Paul Rosenberg are with the concept. This isn't some bullshit bar/restaurant licensing deal. Eminem is critiquing the flavor profiles and telling Curt and Chef Chris "it tastes too good". (High comedy)

Mom's Spaghetti is a bucket list visit for any Eminem fan, for the food, exclusive merch, experience, and the possibility of seeing Marshall there himself.

If you visit, go hungry because the amount of food they serve is outrageous. (Again, you'll see in the video).

My recommendations are the spaghetti sandwich which was honest to God lights out. Two garlic butter toasted pieces of texas toast, sandwiching a heavy helping of their customary reheated spaghetti, from-scratch sauce, and a thin slice of mozzarella. 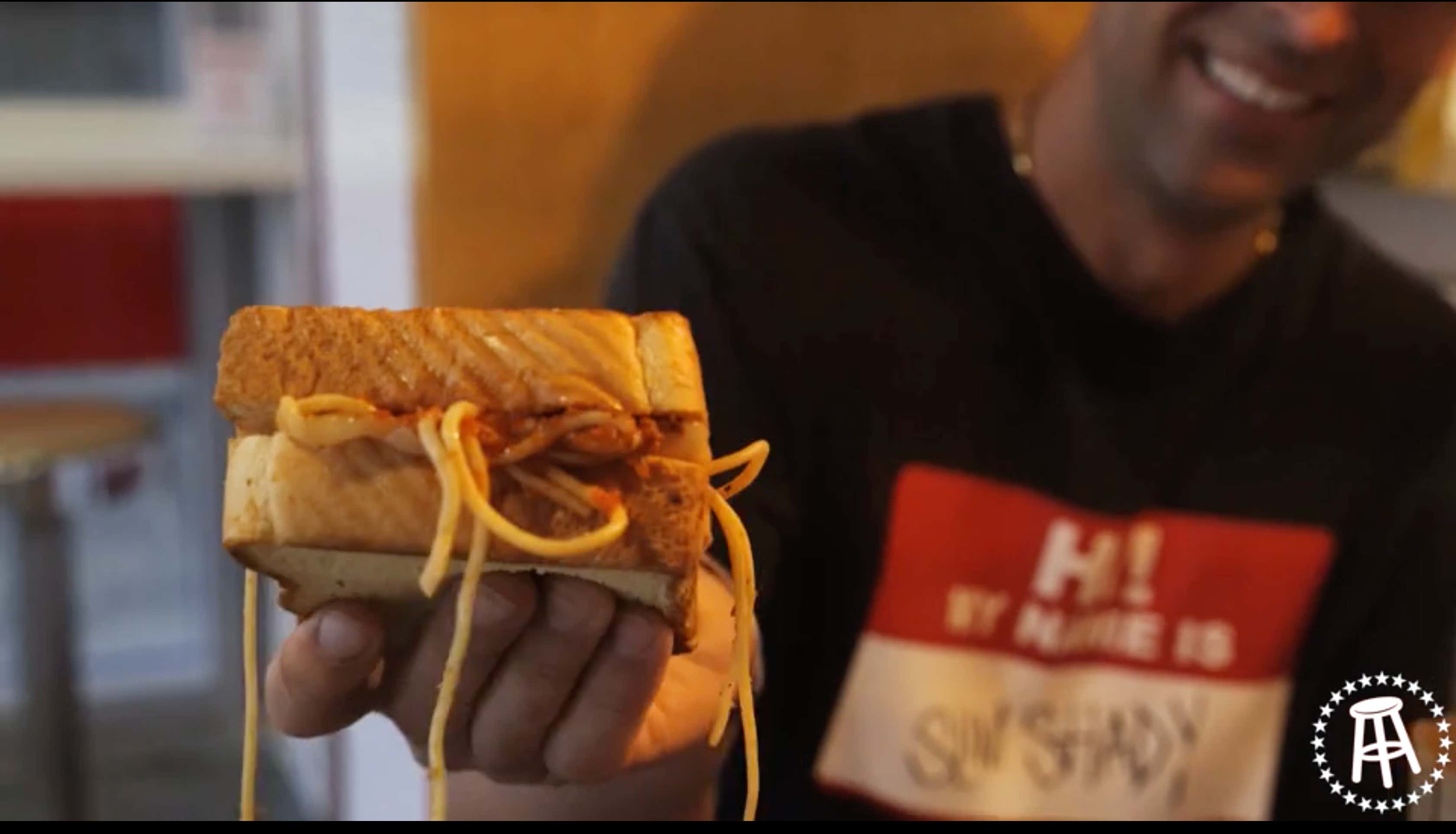 Their specially cooked pasta, tossed in their sauce from scratch, with a hefting dousing of parmesan cheese on top. 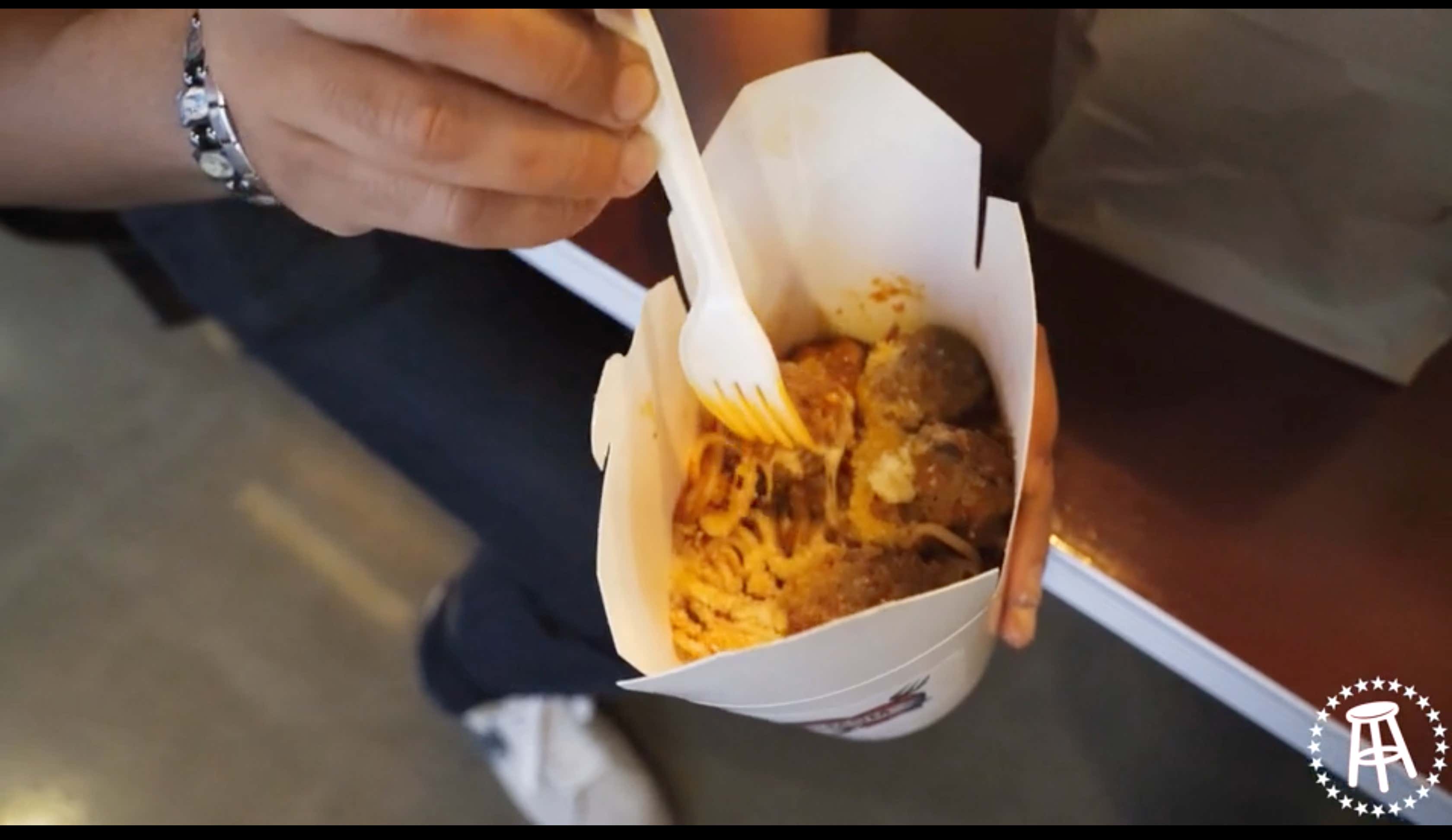 The meatballs were a simple beef/pork blend, and a nice knuckle size. They won't blow your fuckin mind but again, this isn't Rao's were talking about, its a walk-up window in downtown Detroit serving food Eminem wants that reminds him of what he used to eat when Debbie wasn't passed out from valium.

All in all it was worth the trip and I highly recommend it.

Thanks to Alex my cameraman extraordinaire, Curt, Jim, Paul Rosenberg, Chef Chris, and Marshall Mathers for letting us see what their creation is all about. Wish them all nothing but more success.