The Northman is an epic revenge thriller, that explores how far a Viking prince will go to seek justice for his murdered father 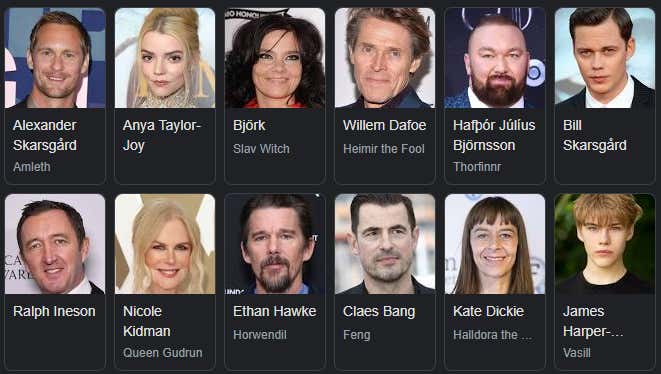 So the Lion King, but with only a slightly more graphic and serious tone? Count me all the way in.

I'm a big fan of viking-based movie and TV. The History channel show was on of the most expectation-exceeding shows I can remember, and 'The Last Kingdom' on Netflix absolutely rocks. We actually interviewed Alexander Ludwig, who plays Bjorn, a few days ago and he had some interesting stuff to say about his time on the show. Including that he had a friend in the industry that told him his career was over for taking a role on a history channel drama.

Anyway, this looks great. Robert Eggers is a master of the dark and dreary and those of you that have seen 'the Lighthouse' or 'The VVitch' can attest to that. This movie combines a bunch of actors he has worked with successful before with a genre that is new to him, and I think it is going to be a hit. Eggers wrote the movie along with Sjón, an Icelandic poet who works with Bjork(also in the movie) a lot. It's based on real Scandinavian legends, has a killer cast, an authentic writing crew, and a great director. What more could you want?

By the way, let this be my plea for more of you to watch 'The Last Kingdom'. It's not prestige television or anything, but i fucking love it. Every episode feels like an entire season in the best way.