Checking in this afternoon to give everyone a heads up about tonight's awesome UFC card on ESPN+ (the final one of the year!) featuring a great heavyweight main event between Derrick "The Black Beast" Lewis and Chris Daukaus (and a plethora of other awesome fights). Prelims are already live!

Derrick Lewis, the obvious fan-favorite, is competing for the first time since August when he lost an Interim Championship fight to Ciryl Gane - and is a +115 dog - but if anyone could surprise oddsmakers with one wild punch in this division, it's probably Derrick Lewis.

Chris Daukaus (-139) stands in his way tonight, and he's an absolute savage who's 4-0 in the UFC with 4 KO's (he's only been to the second round once), and could put himself in title contention immediately with a fifth knockout - this time over Lewis.

Speaking of dogs that never fail to impress, Darren "The Damage" Elkins (+150) is kicking this main card off against UFC legend Cub Swanson (-182), and that is guaranteed to be a banger of a fight.

Everybody remember Elkins' comeback against then-undefeated Mirsad Bektic a few years ago that made Joe Rogan cry?

You pull that shit and I'll watch every single one of your fights til the day you retire and never doubt your abilities again.

Plus, anyone that gets this tattoo…. 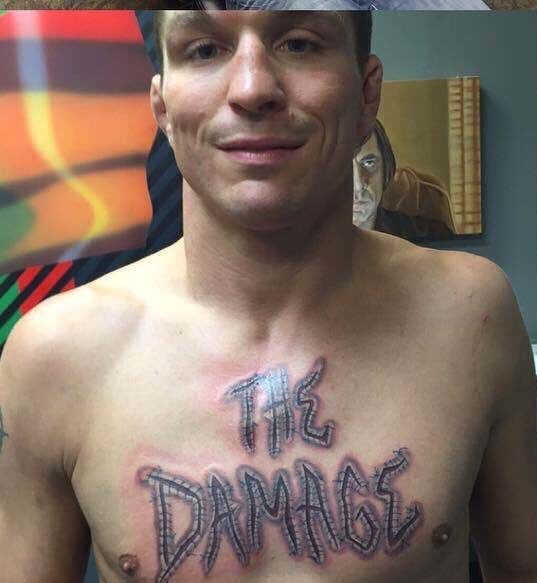 …is a sure-fire bonafide MMA guy.

Cub is also still a ruthless motherfucker who I got to interview this year, and was one half of one of my favorite fights ever….

Another fight I'm looking forward to a lot is the co-main event between Stephen "Wonderboy" Thompson (-265) and Belal Muhammed (+200) - it's a big step up for Belal and it'll be interesting to see how he attempts to solve the Wonderboy code - altho I doubt he will. I think if Wonderboy wins here in spectacular fashion (with one of those classic Wonderboy karate signature moves) he could make a case for a title shot as Kamaru's beaten so many of the other guys in his division.

They'll need fresh matchups if Kamaru wants to stay active and Vicente Luque is the only other guy he hasn't faced in the Welterweight Top 5. Obviously Leon Edwards has worked his way back up as well, and is plenty deserving, but he's also got the Masvidal fight lingering due to that injury, so who knows.

Another can't miss fight is Raphael Assuncao (+215) vs Ricky Simon (-278) - I think there's a serious chance Ricky wins and calls out Sean O'Malley here, and I could see that fight getting booked as it has been talked about in the past.

Finally, here are Derrick Lewis' best moments on the mic….