Seriously, we spoil the whole fucking movie… if you have yet to see it, DO NOT PROCEED AHEAD. 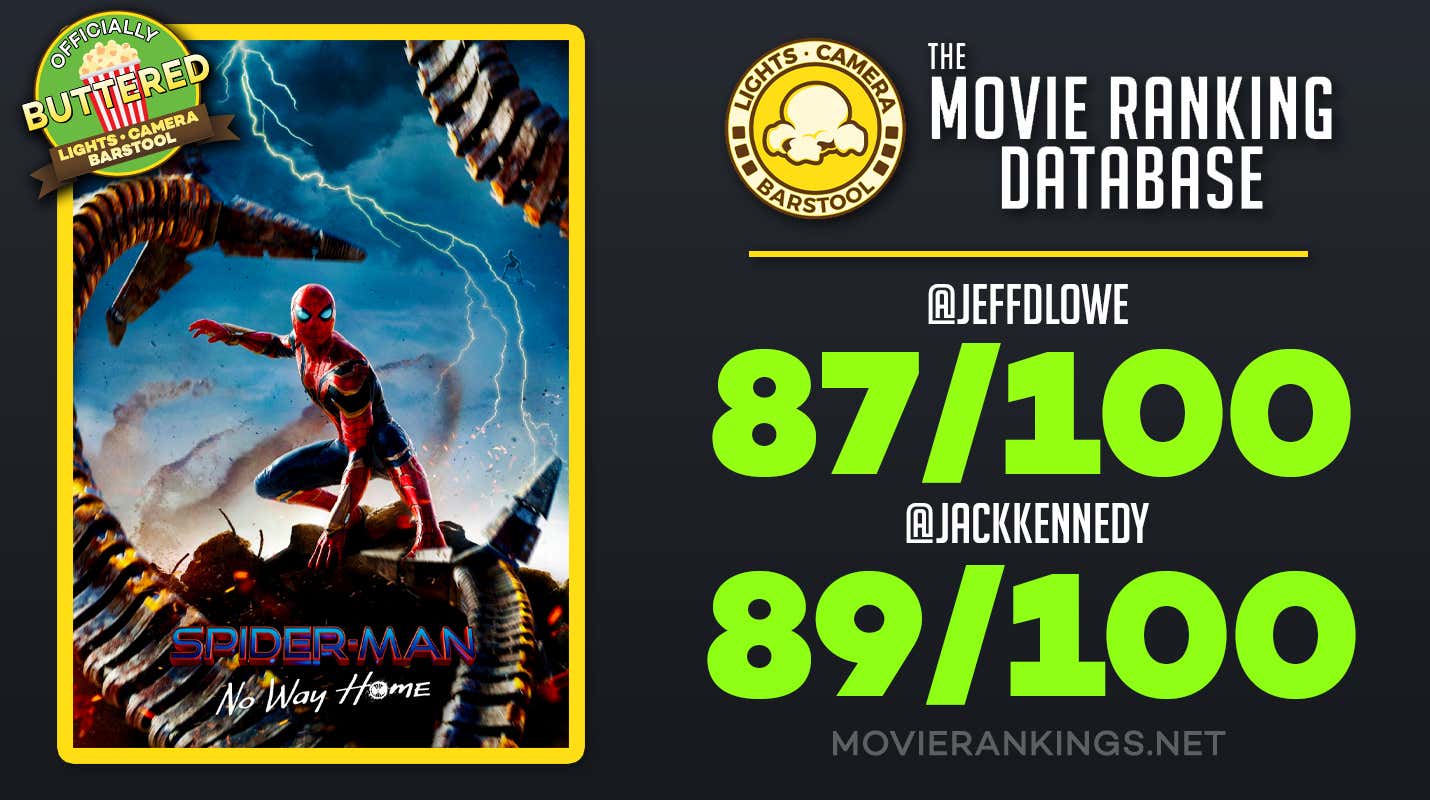 Peter Parker is unmasked and no longer able to separate his normal life from the high-stakes of being a Super Hero. When he asks for help from Doctor Strange the stakes become even more dangerous, forcing him to discover what it truly means to be Spider-Man. (via MovieRankings.net)

JeffDLowe (87/100): There will be debate where 'No Way Home' stacks up with other Spider-Man movies, but there is no question that the newest "event" release from Marvel is absolutely insane, and lives up to its lofty hype. Personally, and this is splitting hairs, this movie falls third in line behind the first two Tom Holland Spider-Man movies, but all of them are excellent, and this newest one is a combination of a surprisingly deep story, and wildly satisfying nostalgia and fan service.

- It's insane that they were able to make this movie work
-- Tons of credit to Marvel Studios and Sony for pulling it off
-- Director Jon Watts deserve credit too at weaving this together
--- Clear he is the right man for the job with 'Fantastic 4' reboot
- Tom Holland's best acting as Spider-Man is in this movie
-- There is some great emotion, and he is truly a relatable character
- The other best part of the movie has to be Willem Dafoe
-- There is a reason why Green Goblin has always been a top-tier character
-- He never lost a step with this role and slipped right back in as the villain
- The other villains were great to see, even if some felt underused
-- Alfred Molina as Doc Ock stood out once again, such a great character
- It was objectively fucking amazing seeing Tobey Maguire & Andrew Garfield
-- Reminds you why Tobey was great, and how Andrew may have been underrated
-- Garfield played the reprisal of the role perfectly and was so charming
- The moments of the three Spider-Man together were chill-inducing
-- A bunch of genuine laughs and their action scenes were awesome
-- Had this not worked, this movie would've been a huge failure
- The big emotional moments were all earned and hit hard
-- Aunt May dying was a shock and properly raised the stakes
-- The initial Peter Parker "with great responsibility" moment was nailed
- Almost all of the callbacks and references were incredible
-- The "scientist" line from Norman, the Rhino reference, etc. all were great
- With that said, this is where the movie gave me a few issues
-- Nostalgia and fan-service were laid on a little too thick at times
-- Felt as if it gets in the way of allowing more of a natural story and dialogue at times
-- Not a massive complaint, but this movie felt more like an "event"
--- Look, I love that shit, I eat it up, but the first two Holland movies were more structurally sound
- I really love where the franchise and character both sit at the end of this movie
-- While Spider-Man in the Avengers and big events are great, he is just a kid again
-- The friendly neighborhood Spider-Man is the Spider-Man I want to see more of…
-- Which is why 'Spider-Man: Homecoming' is my top live-action Spider-Man movie

All three Tom Holland Spider-Man movies are excellent, and 'No Way Home' may not be as tight as its predecessors, but it is certainly the most fun and will be rewatched over and over for years to come.

KenJac (89/100): This movie lives up to the hype in just about every way that a spider-man fan can hope for. It gives you a classic spider-man dilemma combined with both relatable teen and adult storylines. All that and plenty of insane action with high-level CGI as well. The humor worked on a high level just like the previous movies as well, and it is only a few issues away from being the best spider-man.

On the acting side of things, there were a LOT of mouths to feed. The previous two movies had a relatively narrow focus of Parker & MJ, but this one had a bunch of high-profile people that needed catharsis. I think the movie did a good job at giving everyone their fair share, but the movie very squarely belongs to both Holland and Zendaya. Both of them delivered on the low impact humor and real-life moments and on the high impact emotional moments. I think the next two on that list would be Garfield and Dafoe. Garfield has always been vocal about how much he loved playing spider-man, and he brought such great genuine energy & curiosity. Dafoe slipped back into the Green Goblin after 2 decades and delivered what was maybe an even better performance than the original.

The base plot of the movie is extremely classic. The best of the old school hero’s basically have one rule: Don’t kill anyone. Parker hasn’t but now the entire world thinks he killed a revered hero, Mysterio. He’s desperate to right that wrong and it leads him to Dr. Strange to try and wipe the world’s memory of his identity and leads him to try and save all of the villains rather than sending them home to die. Him sticking to that creed shreds open the multi-verse and gets his aunt May killed. That tests his will & dedication to that creed to the limits, and that is where the movie is the strongest.

The only aspect I really take off points for this movie is its usage of nostalgia. I think there is definitely a line where, if you pass it, you can turn a movie into a fan service event. We can call that the ‘Rise of Skywalker’ line. There are a lot of references that are small and appreciated(GG saying the I’m something of a scientist myself). There are also moments that made me roll my eyes a bit(Garfield and MJ’s exchange after he saves her). If that line didn’t get crossed as much and they trusted us to understand character motivations without saying stuff out loud, the movie would have been better off.

Overall, I think it is a really fun time and served as a solid conclusion to this trilogy of Spider-man. Increased stakes, increased loss, increased cast. Everything got bigger, but it lost some of what made the first two smaller-scaled stories so great.

--
The movie is Officially Buttered, and you will have an absolute blast seeing this in theaters. You can head to Lights Camera Barstool right here to listen to our latest episode where we will discuss it on our new episode.