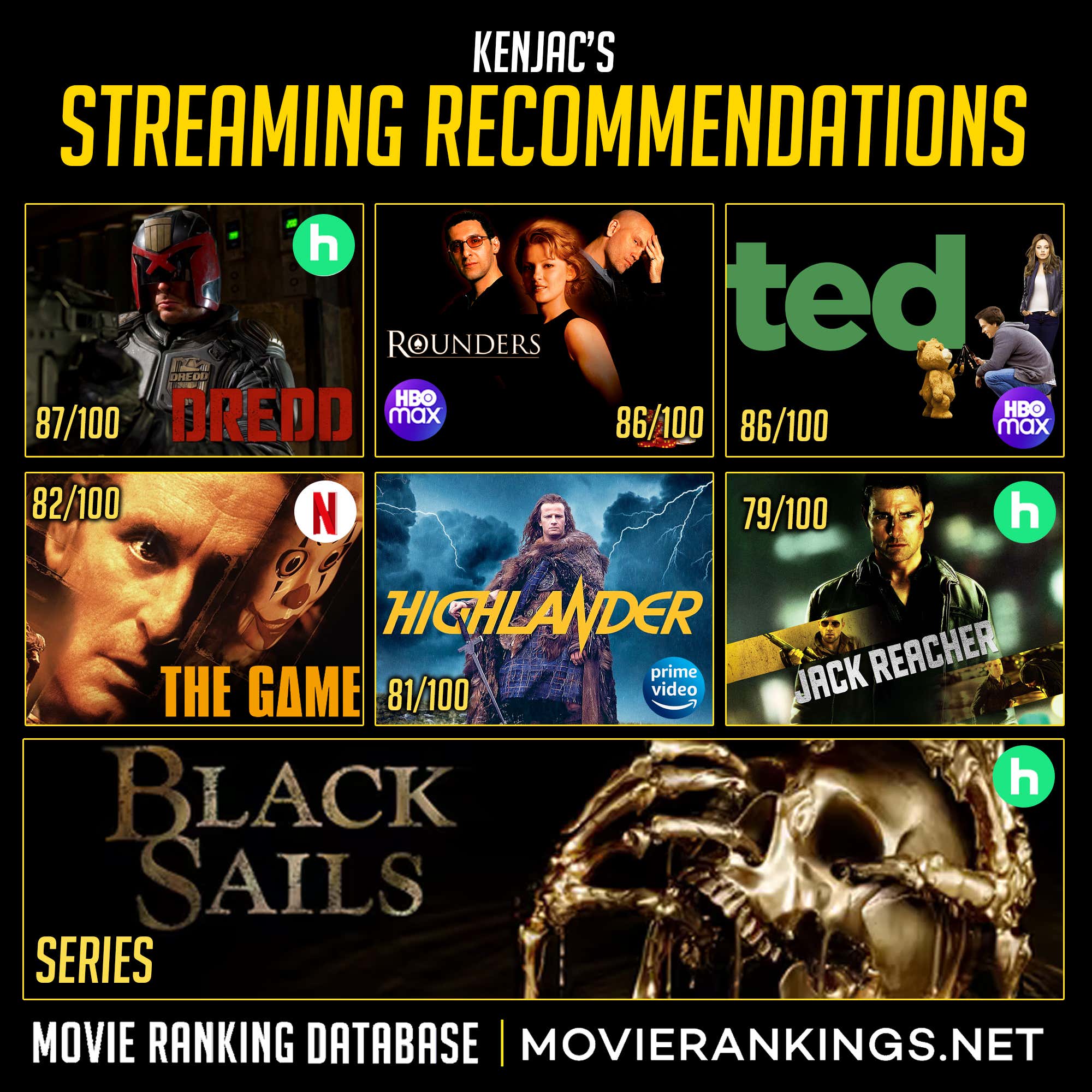 1. Jumanji- Netflix: One of my favorite childhood movies that always plays. If you have kids, it is guaranteed to be a fun ride for them and have plenty of nostalgic value for you. It also makes me miss the shit out of Robin Williams.

3. It Comes At Night - Netflix: After a mysterious apocalypse leaves the world with few survivors, two families are forced to share a home in an uneasy alliance to keep the outside evil at bay -- only to learn that the true horror may come from within.

This is a slow burn sort of psychological horror movie that I think a lot of you might like. Some vibes similar to 'A Quiet Place'.

4.  Ted - HBO Max: This movie has so much to offer. Action, suspense, political intrigue, historical storytelling, drama, comedy & more. I know it's tempting to avoid Oscar darlings, but this movie is probably the most mainstream-appealing winner of the last decade.

5. The Matrix - HBO Max: I recommended this last week as well, but I am doubling up on it because apparently the new one sucks. You know a tentpole movie is gonna suck when even the most homer, soy boy reviewers don't have much good to say about it.

6. Rounders - HBO Max: A young man is a reformed gambler who must return to playing big stakes poker to help a friend pay off loan sharks.

One of my favorite gambling movies ever. So many great moments, lines, etc. Malkovich's two of "MYUDDER FYUCKER!" and "Pay that man His moneyyyy" always stand out, though.

7. Dredd - Hulu: In the future, America is a dystopian wasteland. The latest scourge is Ma-Ma, a prostitute-turned-drug pusher with a dangerous new drug and aims to take over the city. The only possibility of stopping her is an elite group of urban police called Judges, who combine the duties of judge, jury and executioner to deliver a brutal brand of swift justice. But even the top-ranking Judge, Dredd, discovers that taking down Ma-Ma isn’t as easy as it seems in this explosive adaptation of the hugely popular comic series.

I've reccomended this moive a few times and will continue doing so. Beyond being better than the original Dredd movie, it is objectively a fantastic action movie. Really good fight scenes and Stylization.

8. Jack Reacher - Hulu: When a gunman takes five lives with six shots, all evidence points to the suspect in custody. On interrogation, the suspect offers up a single note: "Get Jack Reacher!" So begins an extraordinary chase for the truth, pitting Jack Reacher against an unexpected enemy, with a skill for violence and a secret to keep.

With the trailer for the new Thad Castle version fresh on the brain, it reminded about how fun this version actually was. The Tom Cruise version may be extremely unfaithful to the book version, but he was badass as hell regardless.

9. Big Daddy - Prime Video: It's Big Daddy. You know it, you love it, give it another watch.

10. Highlander - Prime Video: He fought his first battle on the Scottish Highlands in 1536. He will fight his greatest battle on the streets of New York City in 1986. His name is Connor MacLeod. He is immortal.

Highlander establishes a really cool mythology, has awesome performances from both Sean Connery as the Egyptian Spaniard with a Scottish accent and Clancy Brown as the Kurgan, and it has a KILLER soundtrack from Queen. Who Wants to Live Forever absolutely kicks ass. What's even funnier about this movie is that it rocks despite how truly terrible Christopher Lambert is at acting.

2. The Witcher SEASON 2 - Netflix: The second season is coming out soon, so it's time to catch up on the sex-fantasy goodness. As a fan of the games that hasn't read the books that they are based on, I found the storytelling to be a little bit confusing. It made a lot more sense after my second watch, though.

3. Black Sails- Hulu: This is one of my favorite shows of all time. I'm not a person that is particularly interested in pirates, but this one had me drawn all the way in from start to finish. Great drama, action, characters and performances. Also a fantastic series ending.