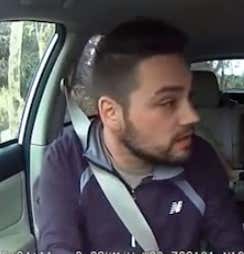 who I belive goes by the name "Logan", is the dumbest mother fucker on earth. First he tells his boyfriend to run, then he makes up some shitty lie about going to visit his mother in Cancun, then he shakes the guys hand and loudly he tells his partner to "pretend" he needs his medicine. I was honestly waiting for him hurl a racial slur. I mean how stupid can you be? If you get pulled over by the cartel…do what they say. It really is that simple. Do what they say and pray they don't chop your head off because you're not going to outrun them and you're definitely not going to out-gun them. Thank God the queen in the white had the sense to follow his instinct otherwise they'd be dead. The scariest part of the whole video was the build up to them getting pulled over. "This car is scaring me how fast they're going." I can't even imagine what was going through their heads when they realized who was behind them.

Regardless, gay people need to stop going to Mexico. We're clearly becoming targets. Last month a five star resort that was hosting a 700 person gay party put on lockdown after Cartel literally stormed the beach with machine guns and robbed everyone. You can read about it here. Not to mention the PV Party Cruise disaster. And now this. It's terrible. That said, flights are extremely cheap right now and I'm looking into a little winter get away. Wish me luck! Now here's the intro Eastbound & Down season 2. Enjoy…