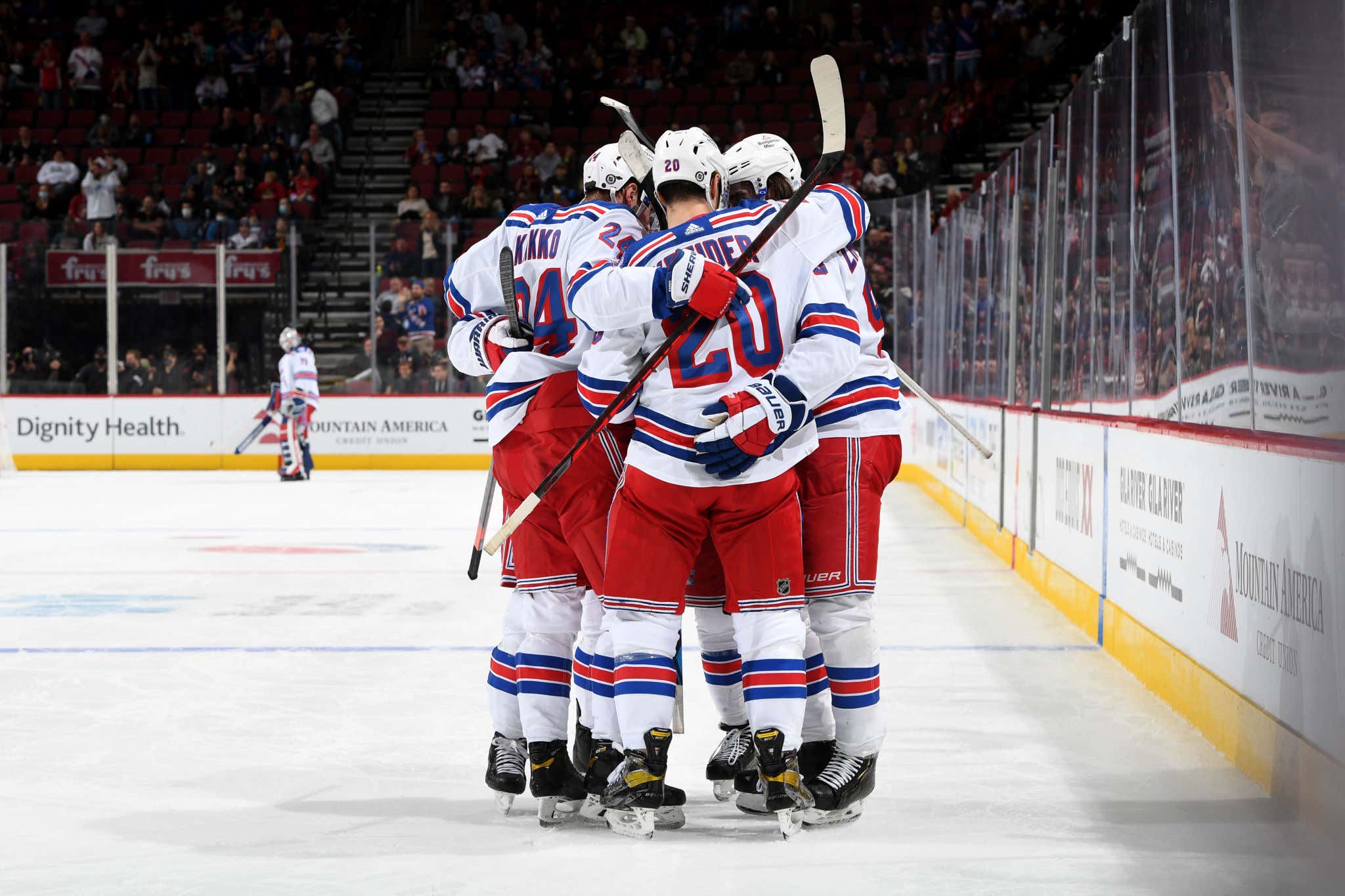 Who'd have thunk it?

Despite an offseason chock full of turnover and a roster chock full of inexperience, the New York Rangers sit atop the Metro at 19-7-3 with Christmas right around the corner after a late comeback victory in Arizona. Yeah yeah beating the Yotes is nothing to brag about - but after 6 games in 9 nights & flights all over the country, flipping a deficit into a regulation W with under 6 to play sans their top offensive weapon is much more impressive of an outcome than the alternative. Especially since it came off the sticks of a pair of Blueshirts (Zibanejad & Kakko) struggling to light the lamp so far.

It wasn't all peachy though. Losing Artemi Panarin to a lower-body injury (which Gallant seems to think won't be for long) is never a good thing, but with just a pair to play over the next 11 days fans have their fingers crossed that GG isn't just blowing smoke and the Breadman won't rack up too many scratches. The relaxed schedule should also mean their all-world netminder won't be watching too many more tilts after an injury two weeks ago. With the Rangers having held water without him (4-3 anchored by a combo of Georgiev, Kinkaid & Huska) it only makes sense to play it safe with Igor & circle 12/27 for his return.

So what do we make of this surprising start? Well I see a lot of naysayers picking apart the Blueshirts for various reasons, starting with Shesterkin. Shesty's been so good this season that NYR critics (including plenty found among their own fanbase) point to his stellar play masking deficiencies and making them look stronger than they actually are. Um…isn't that what superstars are supposed to do? I never understood why great goalies sometimes get singled out as "masking deficiencies" yet skaters "make the team better". Guess what? Preventing goals is the same as scoring them and no one's stopped more above expected than Shesterkin. Exactly the same as the league's elite skaters littering the list of goals scored above expected. "If it wasn't for their goalie…" yeah no shit. If it wasn't for Fox…if it wasn't for Panarin…but they're all here. Not making the Rangers look better but actually better.

Others might break down their record against quality opponents vs weak ones. So let me get this straight. We're criticizing a squad for racking up the points they're supposed to? You can spin records however you want based on whatever criteria you want. Here's how I'll do it:

Let's further break down their 7 regulation losses (4th fewest in the league):

Caps - tied with NYR atop the Metro
Flames (twice) - a top team in the West that was in the midst of a 7-2 run
Leafs - NHL's most points & in the midst of a 15-2 run
Preds - they'd won 4 straight and 5 of 6 before squeaking by NYR
Avs (twice) - a Cup favorite hitting their stride, scoring over a goal more per game than every other team for over a month (5.19!!)

Their losses have not only come to quality teams but NY happened to catch almost all of them during stretches where they've been peaking. Further, not that he'd have definitively changed any outcomes, but their Vezina-caliber goaltender didn't play in 4 of those contests. What does this all mean? It's simple. If you're not among the best teams in the league and/or running white hot, you're not beating the Rangers. For a squad whose true contention window isn't supposed to be open quite yet and merely making the playoffs was the bar coming in, they're indisputably ahead of schedule.

Are they an actual Cup contender though? Doubt it. Most champs gotta take their share of postseason lumps before raising a banner and the Blueshirts still gotta make the dance for the first time in five years. Will they finish the season at their current 116-point pace? Of course not…and that's OK. They're still young. They've got a glaring need for a true top-six wing & some semblance of an NHL-caliber third pair (a position where they've got several near-future options in the system & Nils Lundkvist getting his feet wet). Behind a F/D/G "Holy Trinity" that rivals any across the league though, they're learning how to win. That's Step 1. Thanks to their remarkable start on the back of elite goaltending & special teams, they're well on their way to Step 2 - racking up playoff experience.

Maybe they've been playing over their heads. It's tough to gauge how they truly stack up within the league's toughest division until the last six weeks on the calendar & Metro matchups galore. That doesn't change the fact the Rangers are still a better team than many thought they'd be this quickly, with an arrow pointing straight up even if their record starts to slip. Don't lose focus on the big picture boys & girls. Enjoy the ride.