Back in May, I sat down with Clem and my older brother, Mike, to record a commentary track for Tim Burton's 'BATMAN' (1989), and we had such a good time doing it that we said let's do 'BATMAN RETURNS' (1992) around the holidays!

We finally got to record that commentary track this week, and it was another blast of an episode - during which, I read off 25 facts/pieces of trivia about the movie that caught my eye from its IMDb page!

So without further ado, here's my advent calendar of Bat-Facts for ya....

1. Burgess Meredith, the original The Penguin on the Adam West Batman show, was asked to play Oswald Cobblepot's father in the opening sequence of the film, but he unfortunately got sick and couldn't do it. Instead, Paul Reubens (Pee-wee Herman) was cast - and even brought back to play Penguin's father in the 'GOTHAM' TV series. 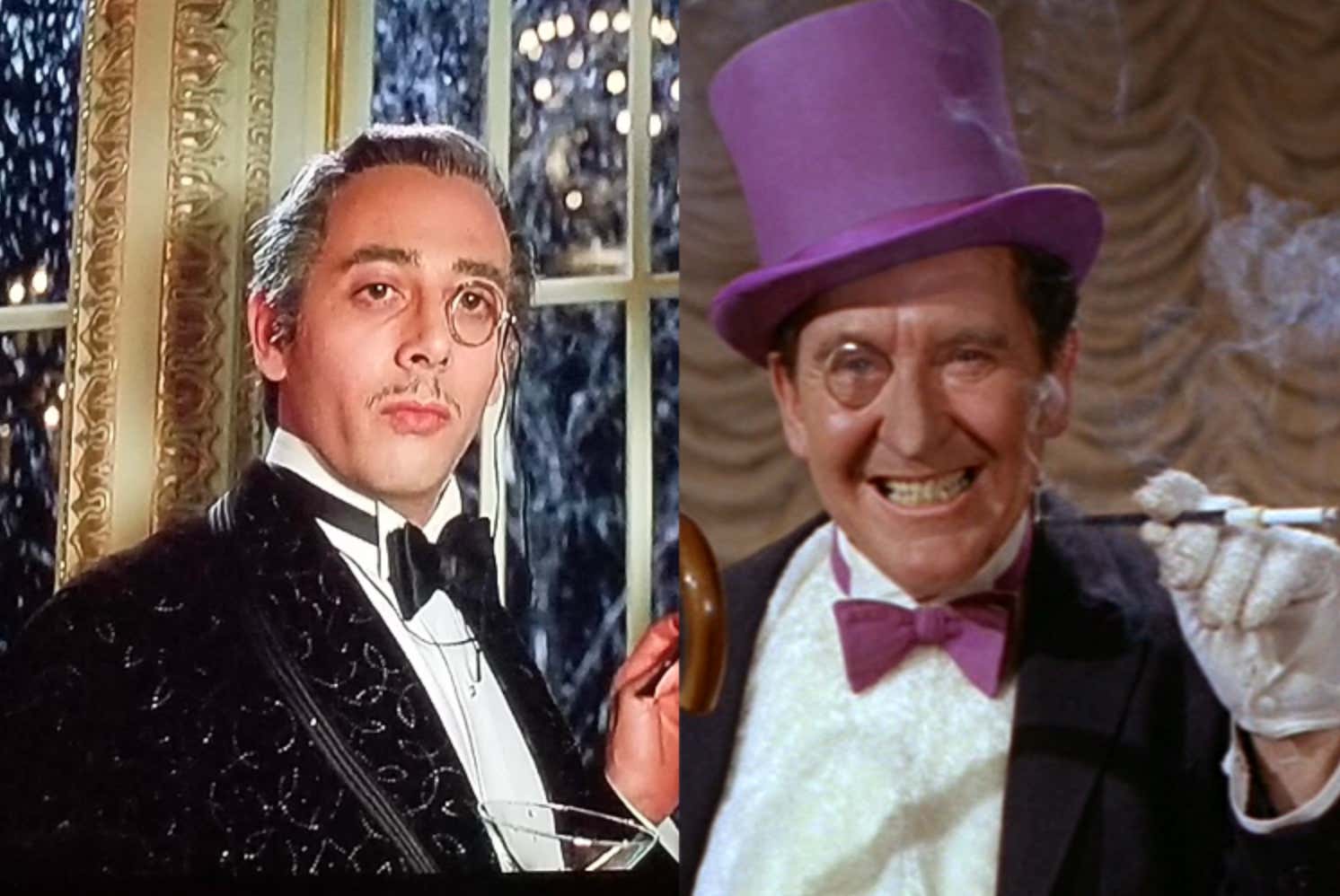 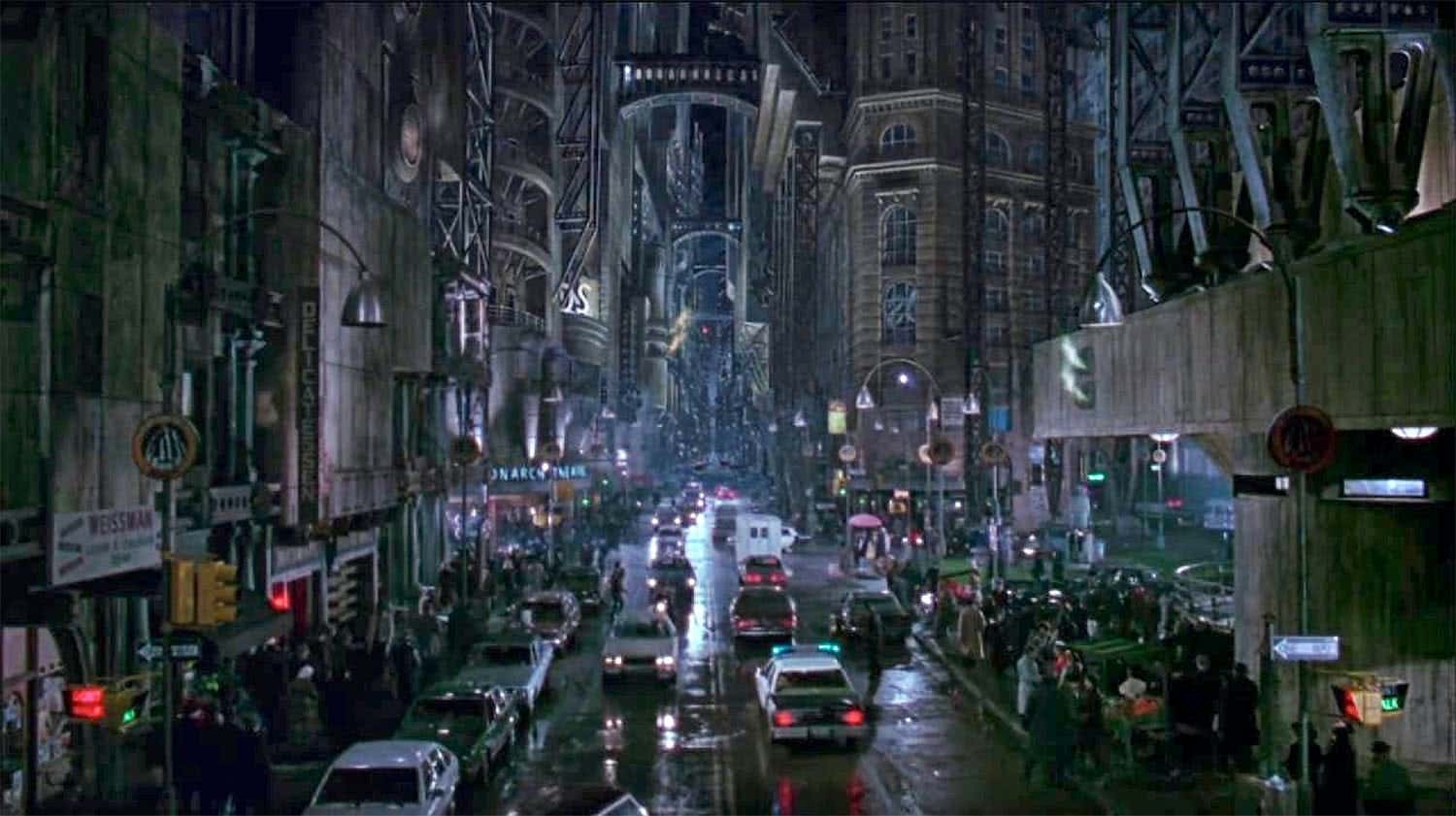 3. Danny DeVito was into method acting around this time apparently, and would stay in-character between takes. 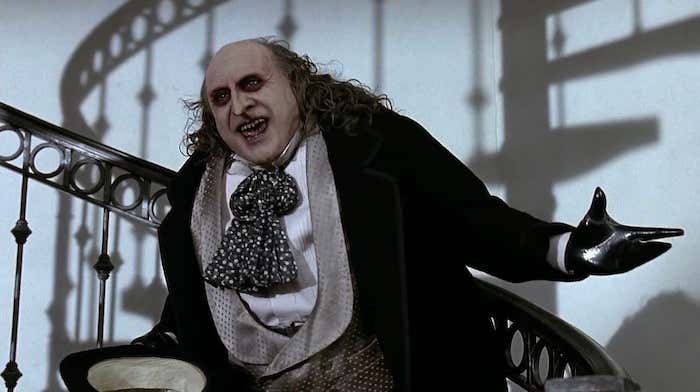 4. One night the crew were collecting the mechanical penguins after a day's shoot, and found one of the live penguins snuggled up asleep against a mechanical one. Adorable. 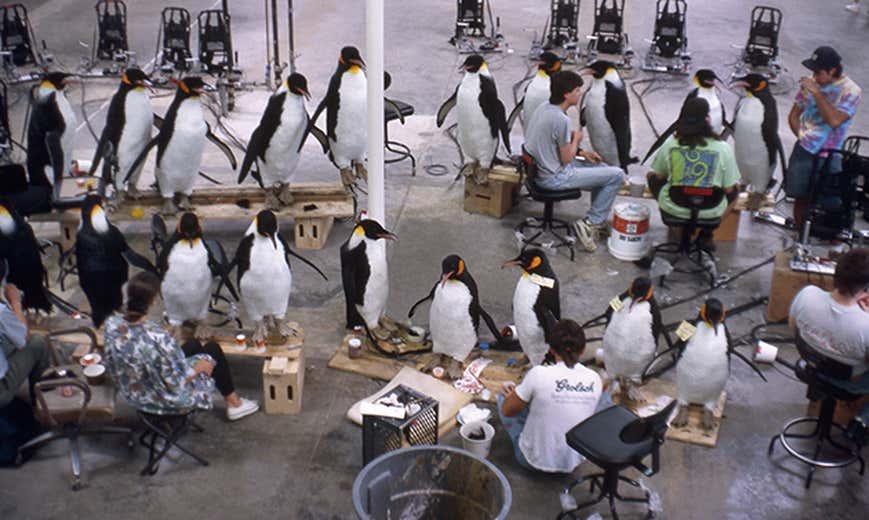 5. The production wanted to use King Penguins, but the only tame ones in captivity were at a bird sanctuary in the Cotswolds (deep in the English countryside). So the birds were flown over to the United States in the refrigerated hold of a plane, given their own refrigerated trailer/swimming pool with half a ton of fresh ice every day, and had fresh fish delivered daily straight from the docks. The entire set was also refrigerated down to thirty-five degrees for them and the birds also had an around-the-clock bodyguard. They clearly enjoyed the experience as, following their stint in Hollywood, most of them had mated and produced eggs, the sure sign of a contented penguin. 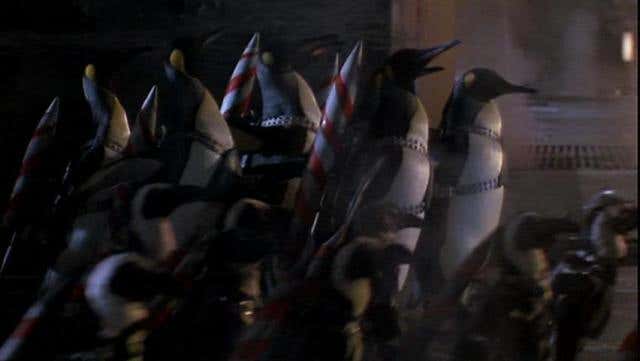 6. Danny DeVito was advised by Jack Nicholson to take the role of The Penguin after 'Batman' (1989) proved such a financial success for him. 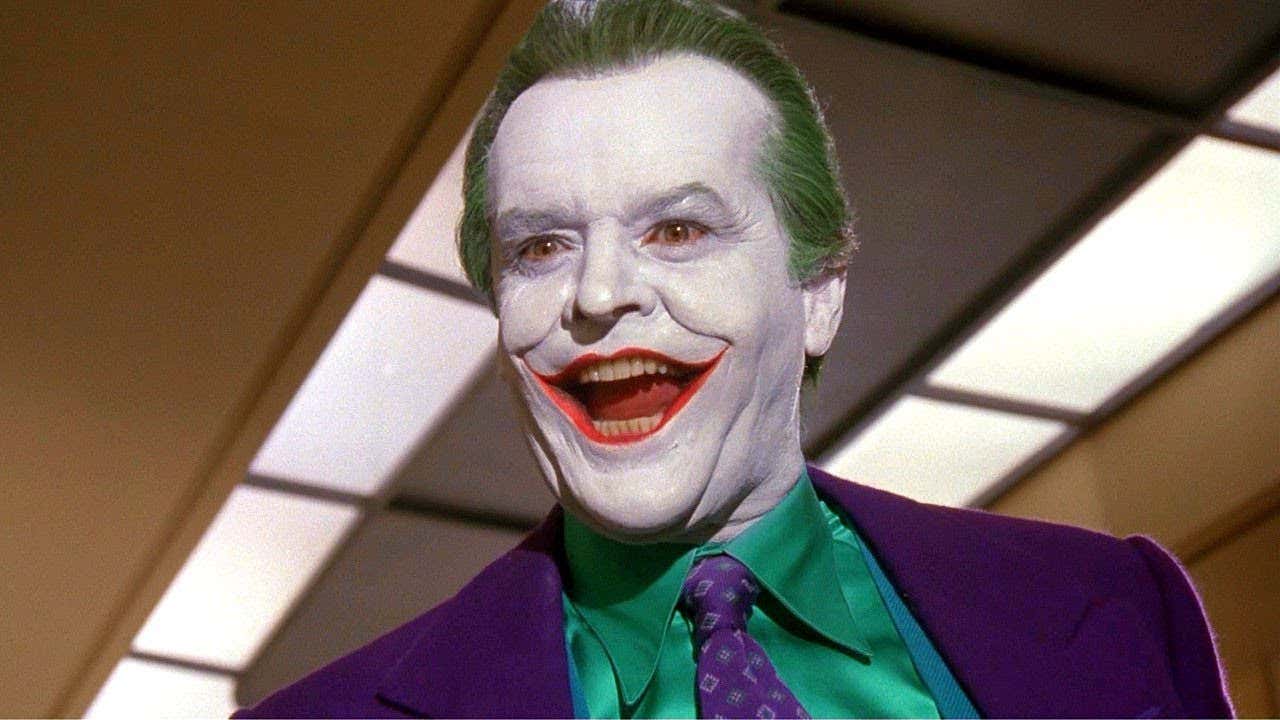 7. This is quite literally first film made in Dolby Digital (then known as Dolby SR-D).

8. Danny DeVito refused a stand-in for the scene where The Penguin gets pelted with rotten food by an angry mob and took all the brunt of the objects himself. 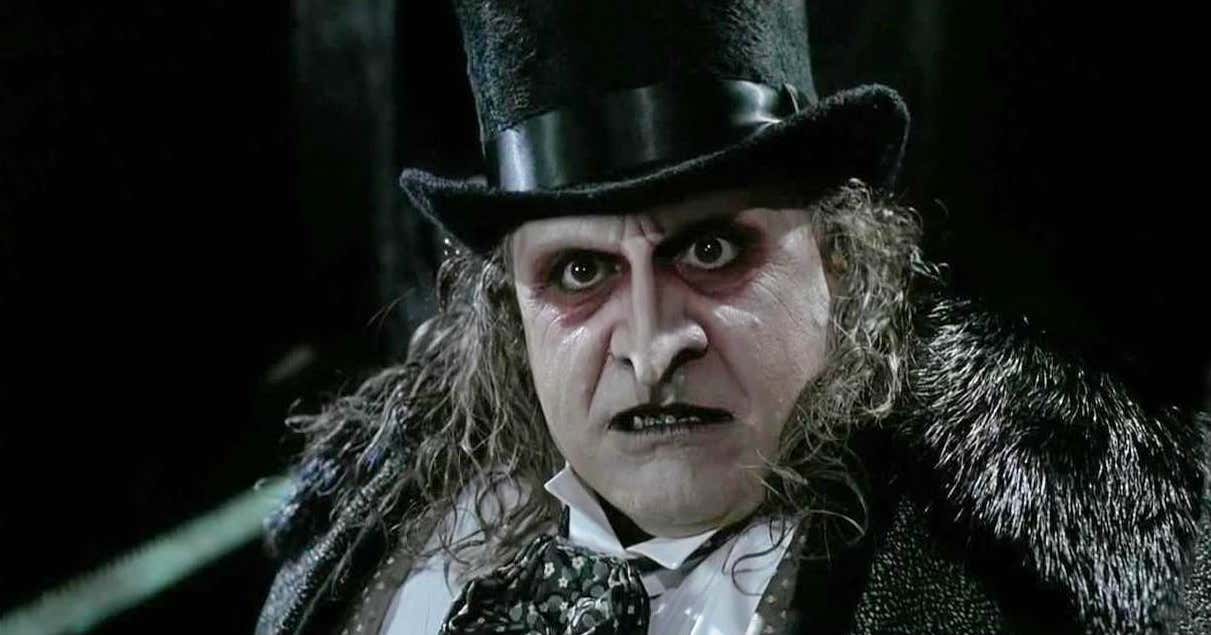 9. The crew had a very hard time getting the shot where the monkey delivers the letter from Batman to The Penguin. Evidently, Danny DeVito's make-up terrified the animal. 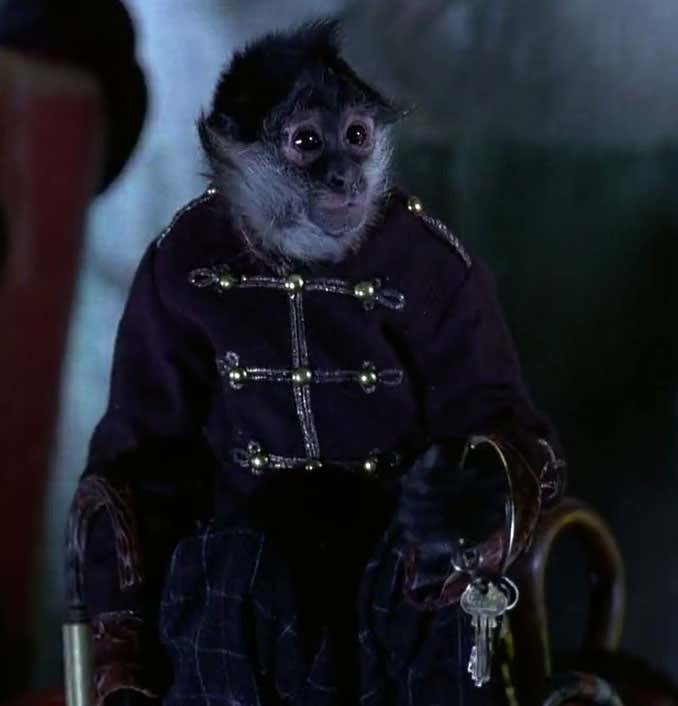 10. Michael Keaton was alleged to have earned $11 million for reprising his role as Batman. The Warner Bros. executives were very uneasy with this, however, director Tim Burton stated that he personally believed Keaton deserved it.

11. Batman doesn't wear boots in the movie, they're Air Jordan 6's connected to an upper kickpad type thing which give the boot-like look. 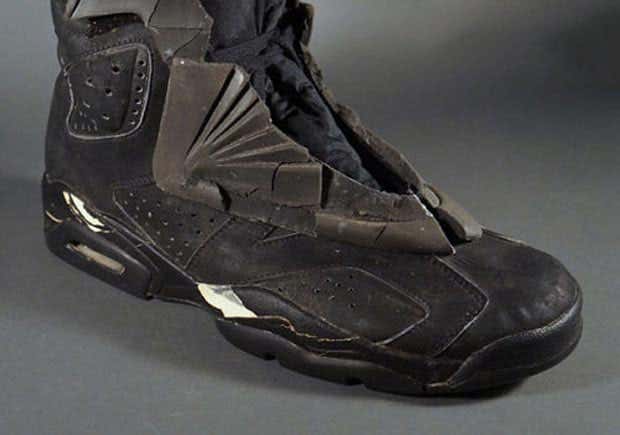 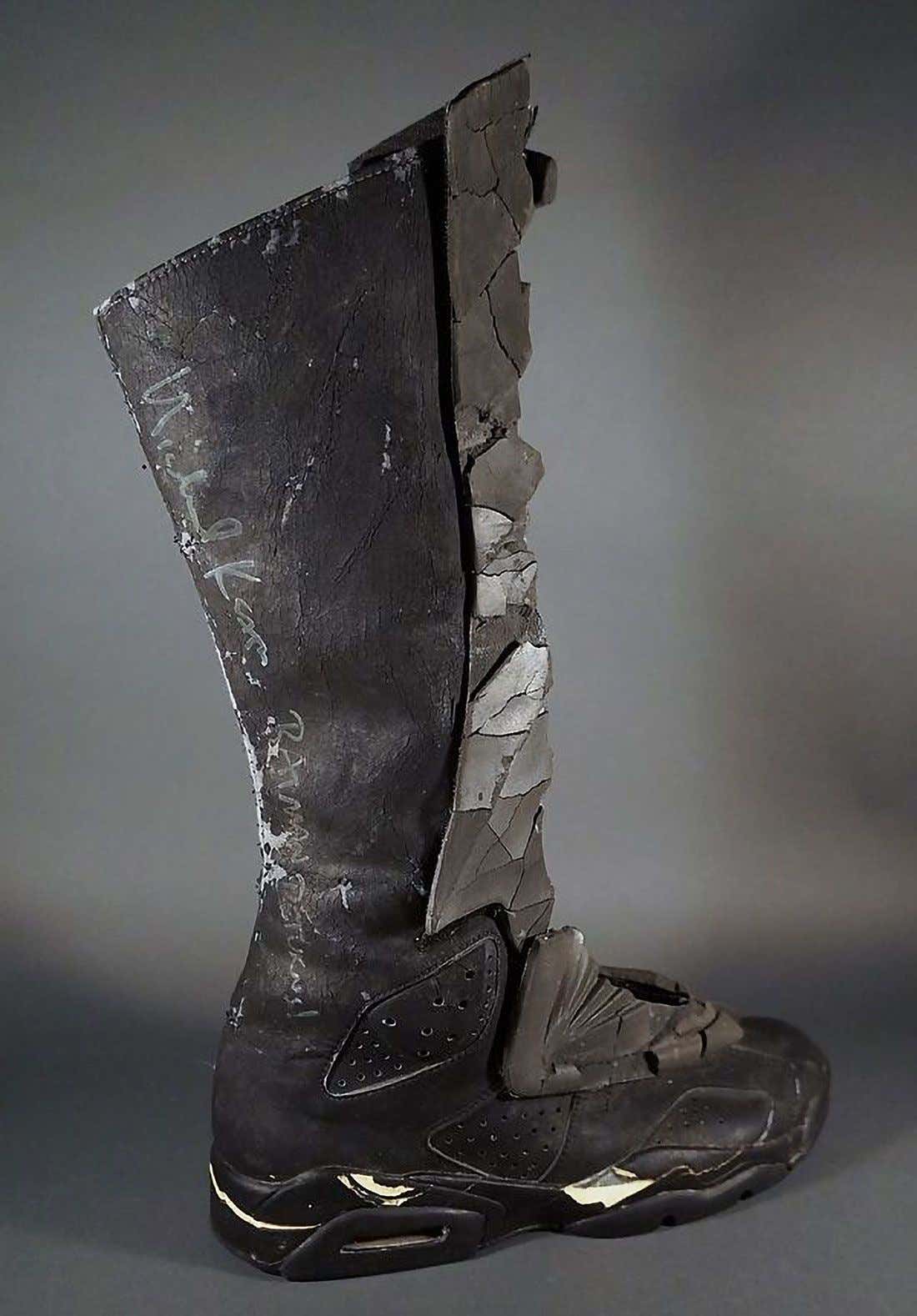 12. Danny DeVito's Penguin makeup took three hours to be applied every morning, so he removed one of the cabinets in his trailer and put in a LaserDisc machine and a television. While they were putting on his make-up, he brought in his favorite movies and watched them in the mirror. 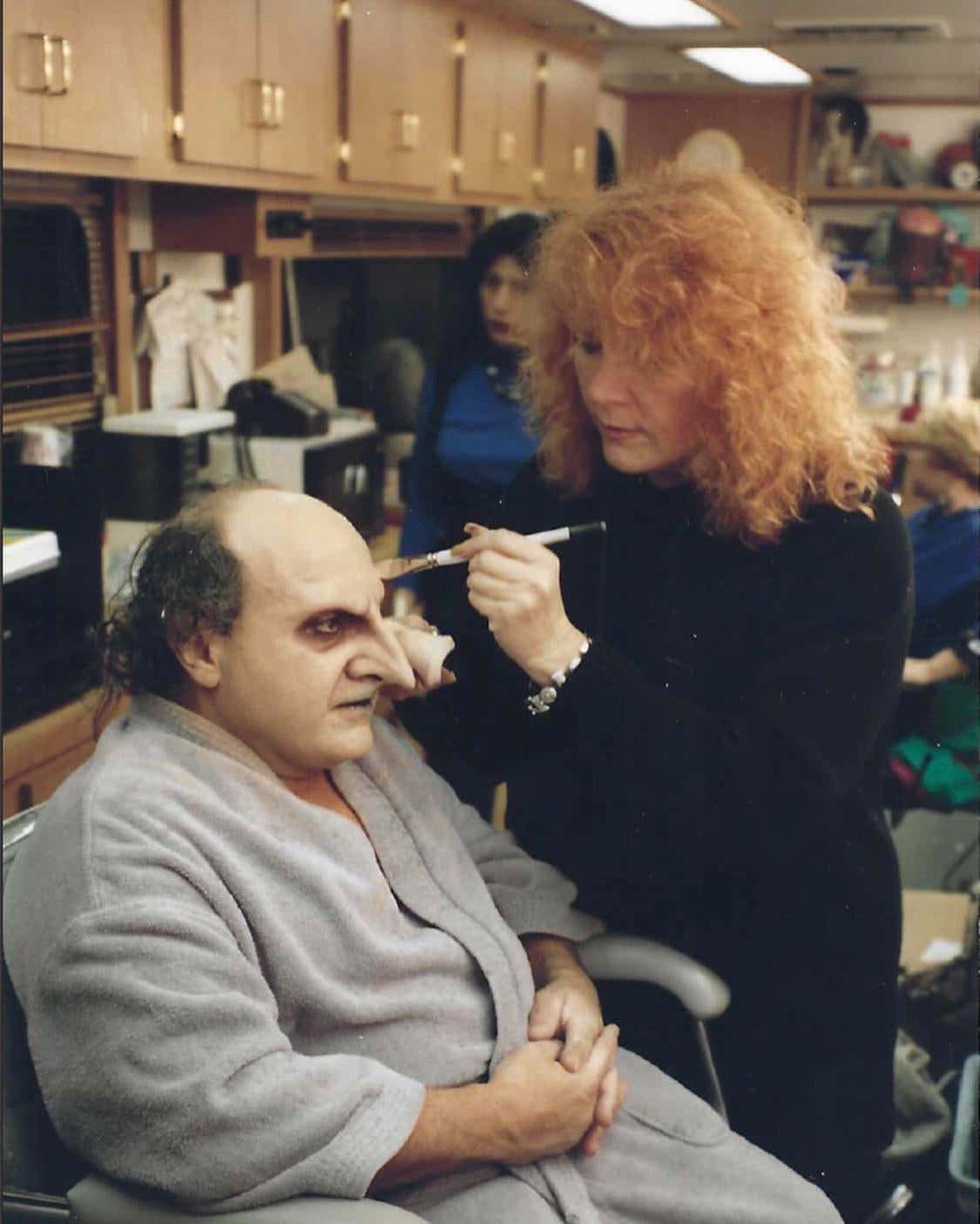 13. On 'Biography: Catwoman: Her Many Lives' (2004), Michelle Pfeiffer said that her Catwoman costume was vacuum sealed once she was fitted into it for scenes, so she actually had only a short amount of time to perform before she would have to have it opened or she could become lightheaded and pass out. She also admitted that when she first was learning to use the whip, she accidentally cut her trainer's face with it, at which he acted as a complete gentleman and continued with their training.

14. Michelle Pfeiffer went through sixty catsuits during the six month shoot, at a cost of $1,000 apiece. 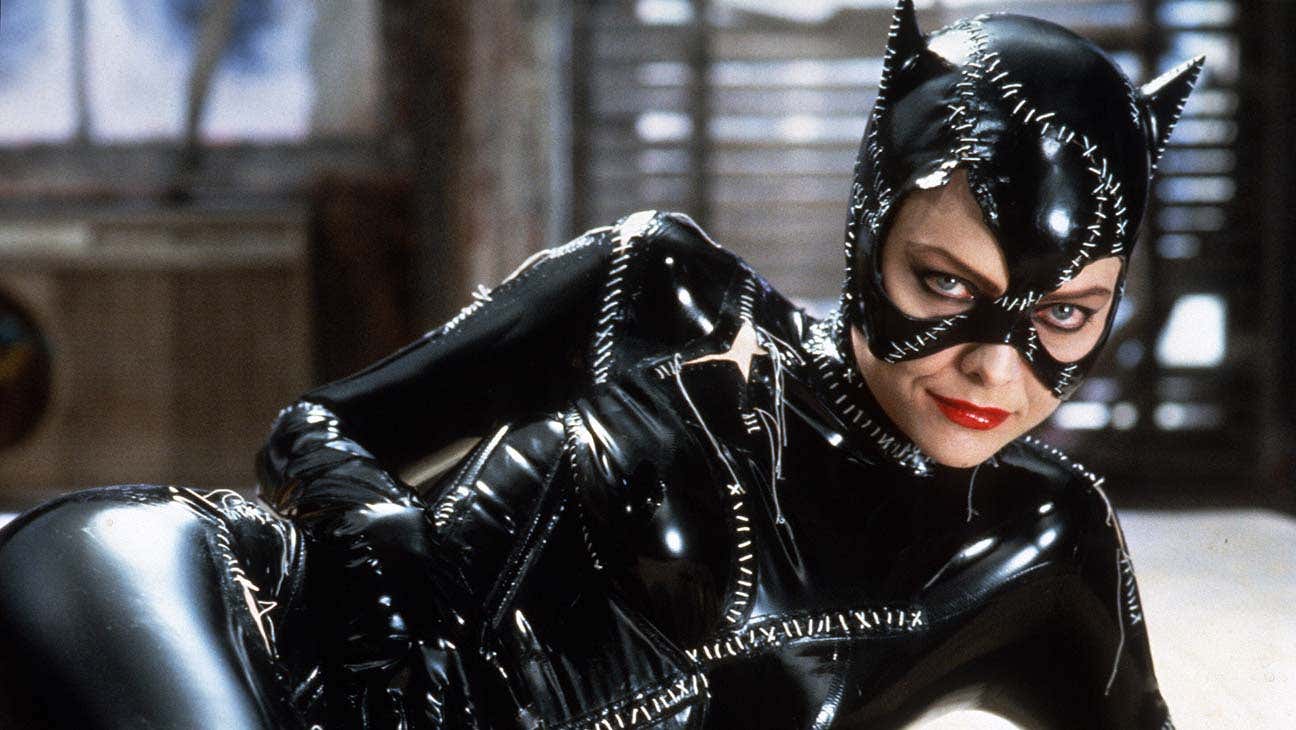 15. It made $47.7 million in its first three days, a record at the time, only to be broken by Jurassic Park's opening weekend the next year. 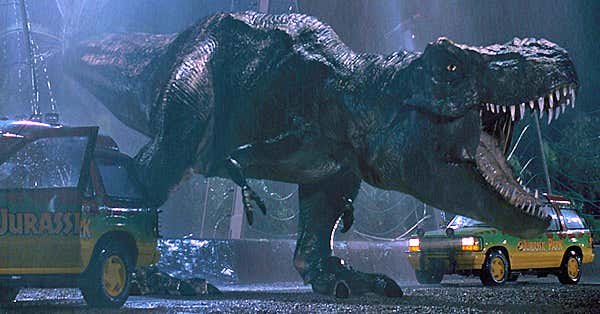 16. Annette Bening was cast as Catwoman, but was replaced by Michelle Pfeiffer after she became pregnant. Meryl Streep, Brooke Shields, Susan Sarandon, and Madonna were all in consideration for the role as well, and Geena Davis turned it down to star in A League of Their Own (1992). 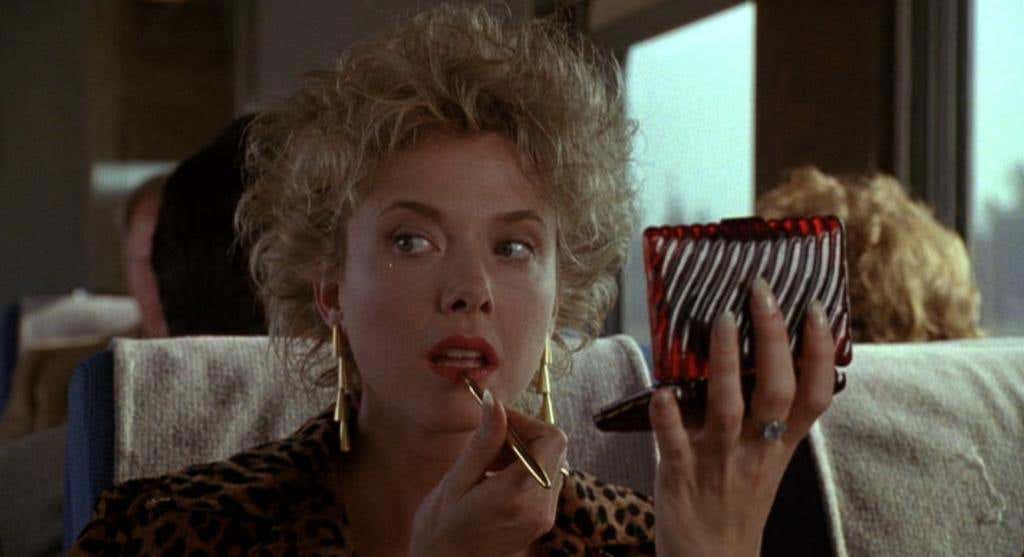 17. This was the first of the live-action Batman films to use computer generated visual effects: the shield on the Batmobile, as opposed to the previous film, and the remote controlled Batarang.

18. During one scene, Michelle Pfeiffer put a live bird in her mouth. They had bird puppets on-set, but Pfeiffer thought they all looked too fake.

19. This is the only sequel to one of his own films that Tim Burton directed himself. 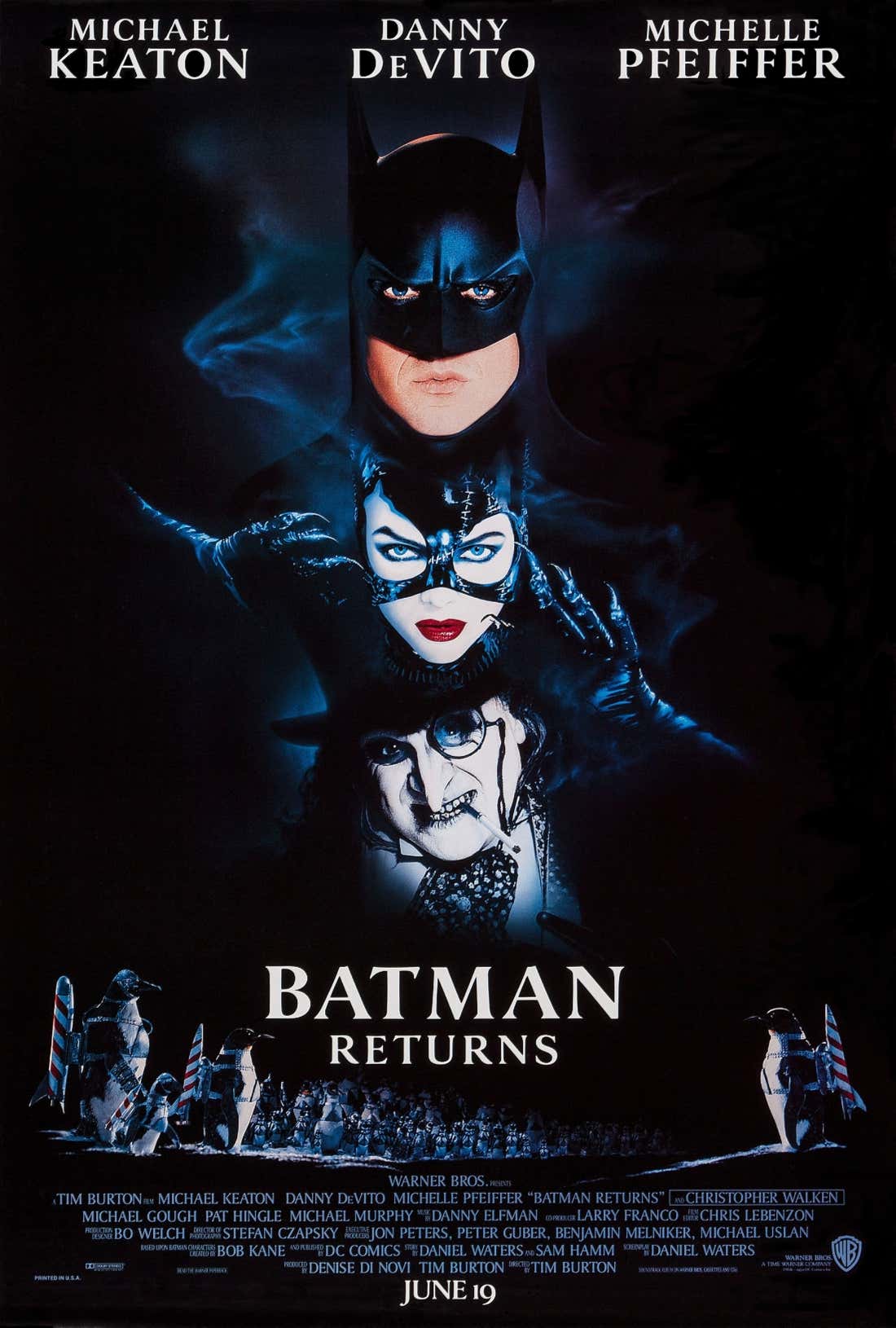 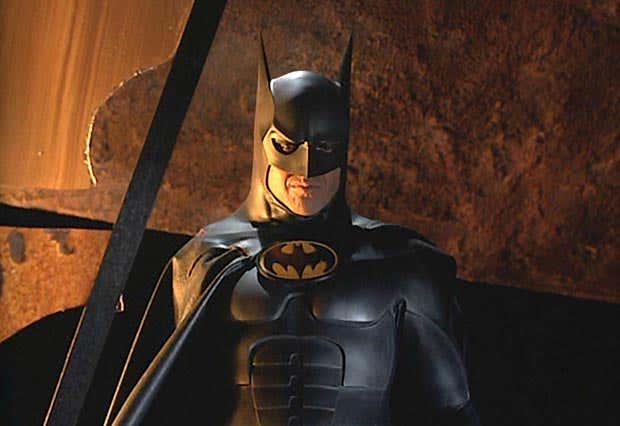 21. A Penguin action figure based on his comic book counterpart was released as part of Kenner's line of figures based on the film, as Danny DeVito's image of the character was deemed too scary for kids. The figure in fact was a repaint of the Penguin action figure released in 1980s Super Powers Collection toy-line by Kenner (the original one had a blue suit, whereas the one released to promote the film has a black suit). 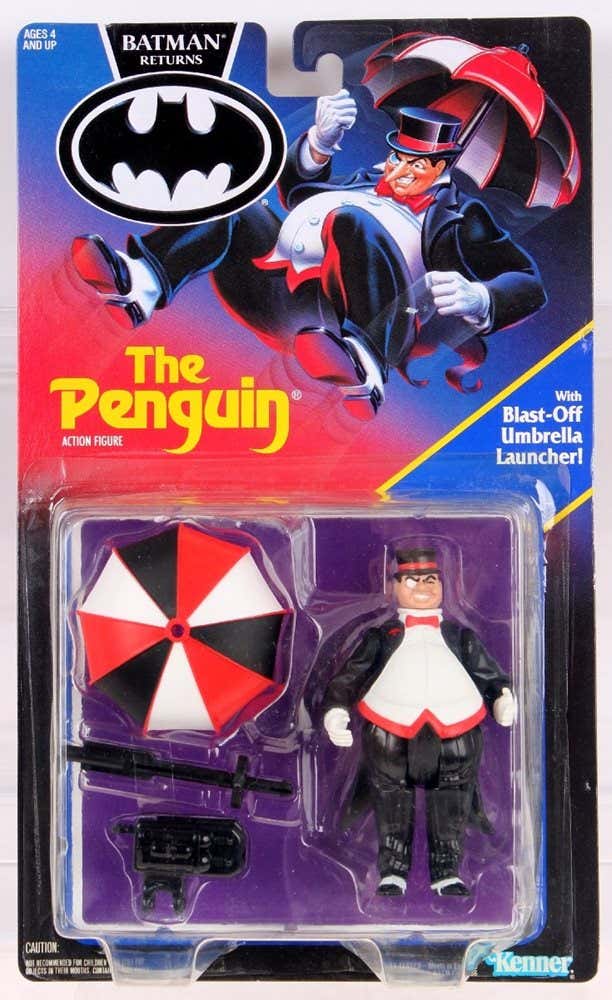 22. Singer David Bowie, who had been previously considered to play the Joker in Batman (1989), was the first choice for the part of Max Shreck before Christopher Walken was cast. Bowie turned down the role in favor of one in Twin Peaks: Fire Walk with Me (1992). 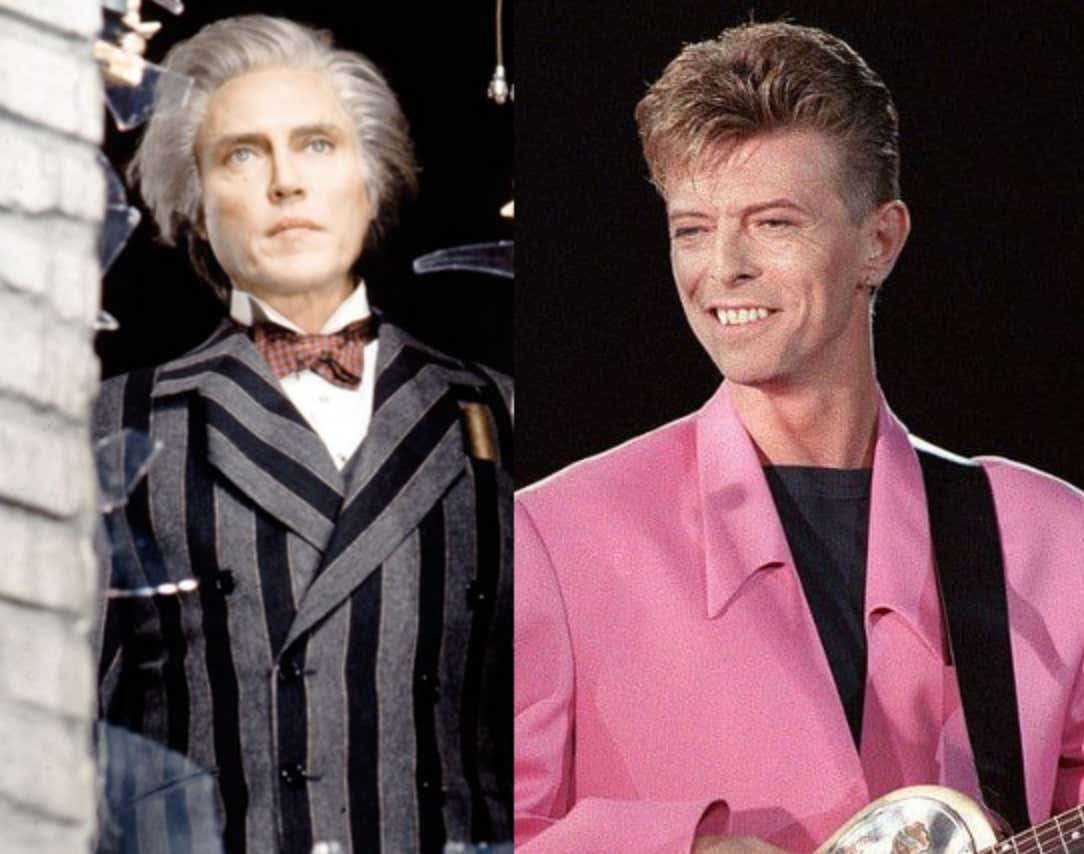 23. One of the photographs in Max Schreck's office depicts him with Arnold Schwarzenegger, who later played Mr. Freeze in Batman & Robin (1997). 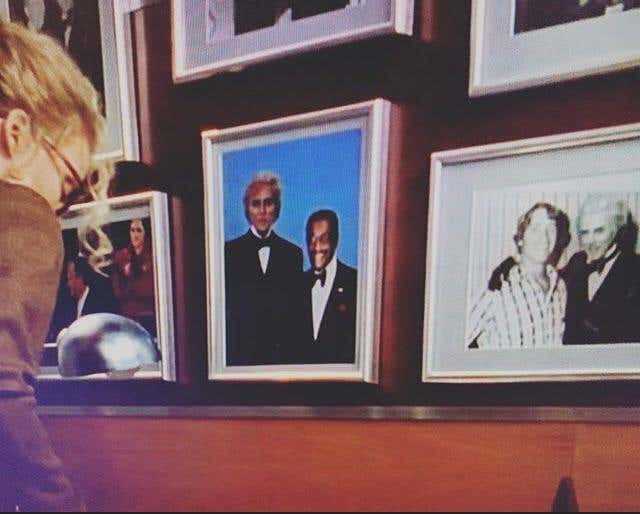 24. It was intended that the character of Robin be introduced in this film. Reportedly, Tim Burton collaborated with DC Comics artist Norm Breyfogle to redesign the Robin costume for the introduction of a new Robin, Tim Drake, so that it would convincingly fit into The Dark Knight's gritty, dangerous world in the film. The winning costume was one designed by Neal Adams, but the new Robin's "R" symbol and bow staff was influenced by Breyfogle's presentation. Kenner Toys even produced a corresponding action figure, but when Robin was eventually written out of the script, Kenner released the toy anyway, as the character newly rendered in the comic books. 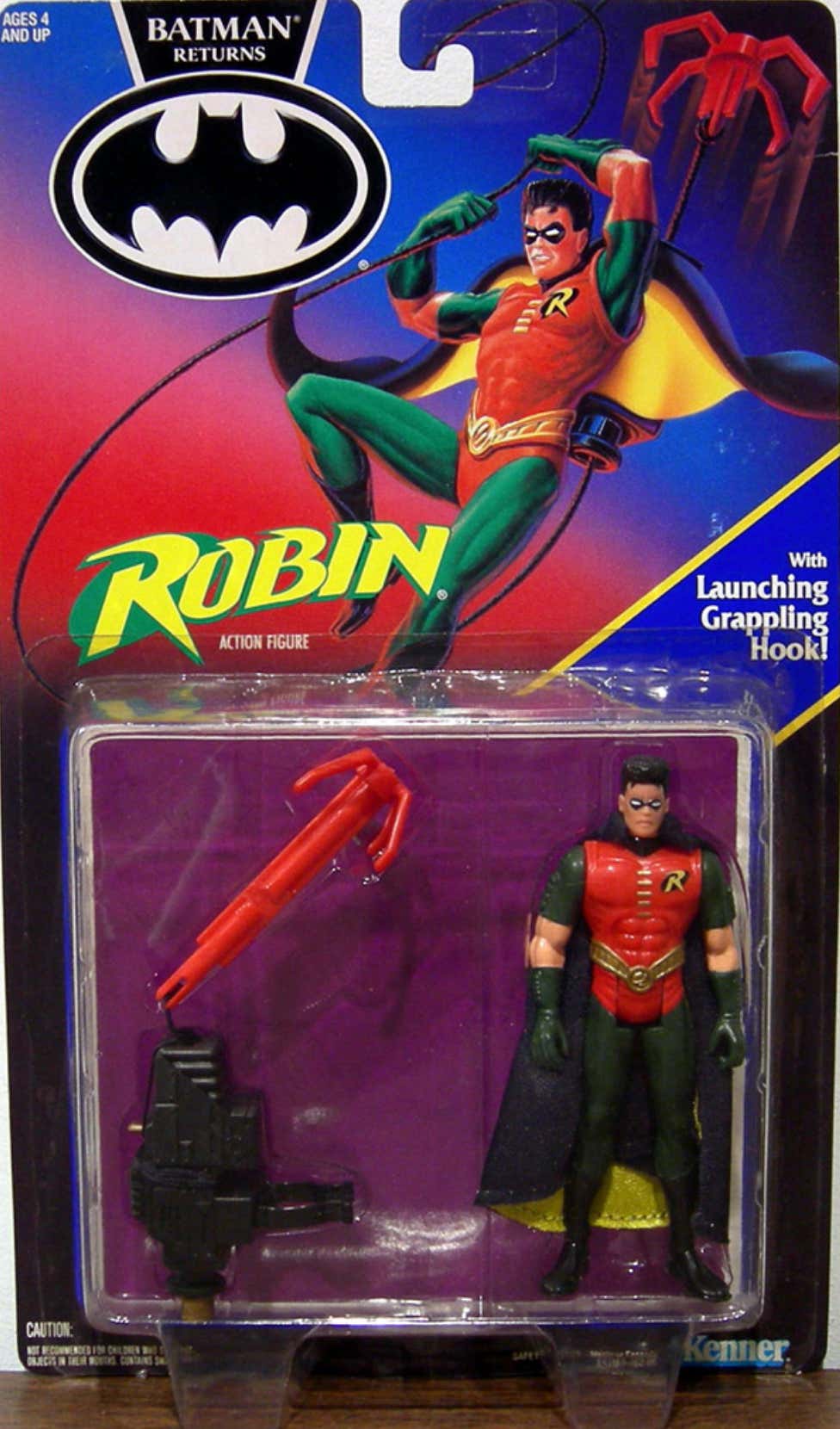 25. The film's sole full theatrical trailer debuted in front of prints of Wayne's World (1992) in February 1992, and was attached to subsequent releases that year. An alternate teaser trailer, unavailable on any DVD and Blu-ray releases, appeared on selected Warner Home Video releases prior to its June 19 release date.

All Facts Credit to: IMDb