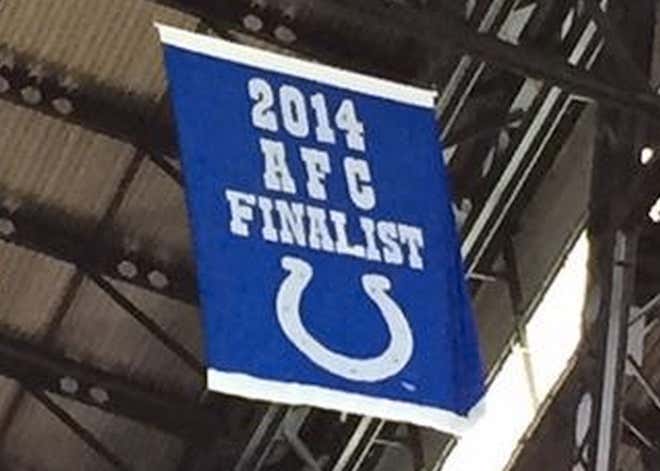 Some wars, for some people, are never over. Invariably it's the losers in any conflict who can't bring themselves to bury the past and just keep on trying to fight it long after the dead have been laid to rest, last respect have been paid, memorials built, and the rest of the world has moved on.

Think of the Middle East, were conflicts that began millennia ago are still raging. Ethnic groups in Eastern Europe that continue to hold grudges that their great, great grandparents kept going. I've heard that in China, there are those who still want revenge for the United Kingdom handing them their lunch in the Opium Wars of the 1830s.

And long after the Patriots emerged victorious from the Deflategate War, one Colts media member is still pointing an angry, judgmental figure at New England and doing the John Rambo, "Nothing is over! Nothing! You just don't turn it off!" speech. And that would be this man we haven't heard from in almost two years now:

Gregg Doyel hasn't let it go. At least not based on this latest piece he's written:

Here's where I'd excerpt the goofiest parts of this inane, amateurish, grade school drivel. But unfortunately it's behind a paywall and I'll give that money to the stranger who sent me that grammatically text saying he needs me to send him help in the form of gift cards than pay IndyStar to read Doyel's pisspoor diatribes. The Tweet and the first sentence and a half tell me more than I need to hear.

Still, it's good to know there are still people out there clinging to Deflategate like it was ever a thing. Despite all the evidence to the contrary. To the physics experts and Science Fair projects dashboard lights telling drivers their tire pressure is low in the cold and Tom Brady's sustained, consistent, superhuman excellence. Despite the legal scholars saying how slanted and discredited the investigation was. Despite a documentary starring physicists, law professors and a ruggedly handsome silver fox who are all experts on the subject:

To some extent, that film won over one of Gregg Doyel's major contemporaries. The architect of the first report that the NFL was investigating the footballs on that fateful night in January of 2015 when the Patriots kicked the Colts collective dick in the dirt and it all began:

But Doyel is still walking his post, almost seven full years later. I'd admire his tenacity if it wasn't such a colossally wrong fight to waste your time and effort on. Once D'Qwell Jackson, the Colts linebacker who's interception of a Brady pass was supposed to be the play that sparked the whole witchhunt declared there was nothing to it, any sane, rational adult would've admitted they were duped. Or, more likely, just changed the subject and never brought it up again, just to save what's left of their dignity. But not this guy.

All that said, telling your readership how to behave is more disrespectful to them than any boos directed at Bill Belichick and Josh McDaniels could ever be. Indianapolis is one of the biggest metropolitan areas in the country. With a sports tradition that goes back to Hoosiers basketball at the turn of the last century. And they've had the Colts for almost 40 years. Yet this doofus is talking to his target audience like they're a cow town that just got their first minor league hockey team and don't know how to root for them. It's not sad so much as it's insulting.

Then again, I guess some of these wounds aren't just from Deflategate or Spygate or Tony Dungy Thinks the Locker Room is Buggedgate. They're much fresher than that: 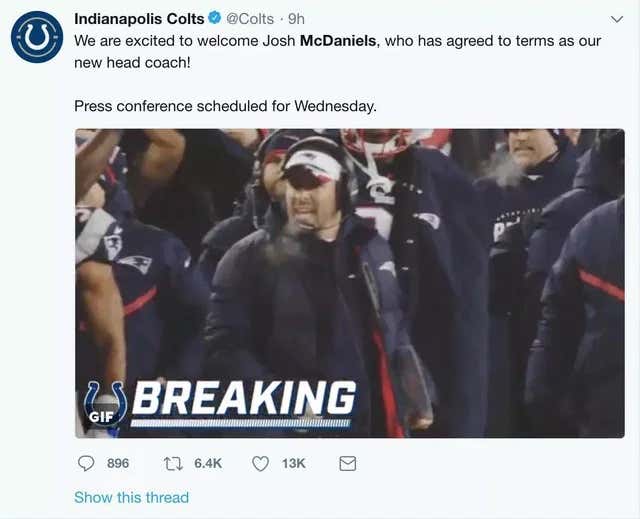 But still, who posts that dreck? Colts fans are going to boo because it comes naturally. It has since those postseasons when Peyton Manning pissed himself in the playoffs at Gillette and Bill Polian got the league to change the rules to outlaw the Patriots defensive schemes. For all the good it did them. So maybe the right thing to do isn't to demand your fanbase vent your frustration for you. The Colts should just do what they've done in the past. Pipe in the sound of a crowd booing.