This past season was when I finally made the big leap to start watching Formula 1. After my brother kept hyping up Drive to Survive and F1, I was very hesitant to start my journey watching F1. It seemed way too complicated with car parts, different teams, various tracks all across the world and 70+ years of racing history that I wasn't familiar with.

The time was mid-late May and for all my F1 fans out there, you know what time this is. None other than the most notorious race of them all - The Monaco Grand Prix. The entire office is buzzing about F1 - Christian Horner is on PMT, Gametime is doing race simulators, and Logan is trying to tell everyone the significance of this weekend's race.

Monaco NEVER disappoints - the beauty, the drama, the money, the party, the driving - it's all on display at the Monaco Grand Prix. 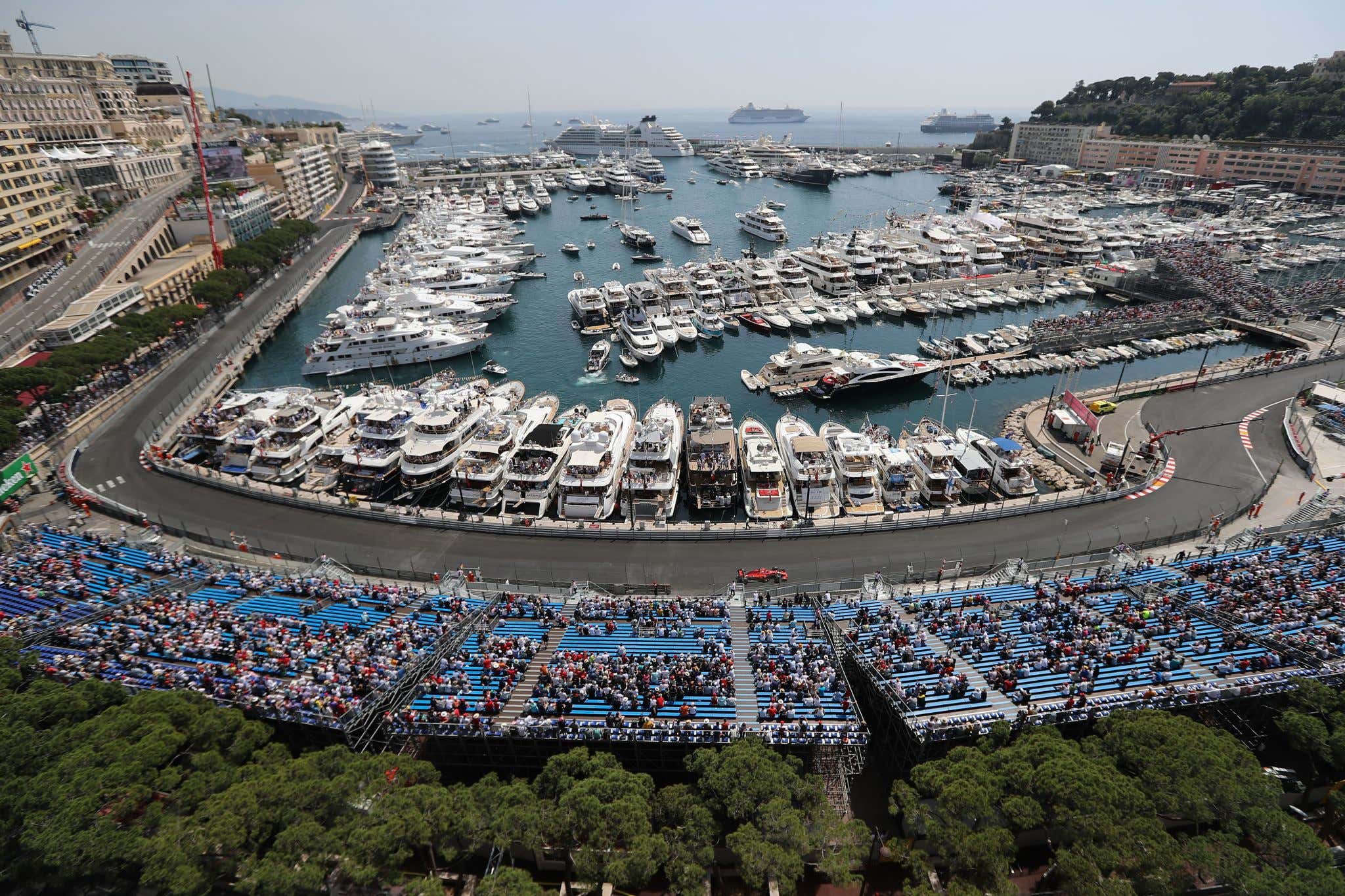 Being at Monaco is simply one of the biggest flexes out there. Pull up in your Yacht and watch the best drivers in the world battle it out through this historic racing venue. If you're an F1 fan, you know that Monaco is all about qualifying. The streets are so narrow it's extremely hard to overtake your opponent.

So drivers truly have to push, push and try to get that pole position to start at the front of the grid. Charles Leclerc (driver for Ferrari) pushed has hard has he could and ultimately earned pole position…however he ended up crashing on his final lap which fucked up gear box. In the end, the engineers for Ferrari weren't able to fix the gear box issue in time for the race. RIP Charles Leclerc - there's always next Monaco Grand Prix.

However, after this entire gear box issue, the pageantry of Monaco, and my first real introduction to the sport, I was HOOKED. I ended up firing up Season 1 of Drive to Survive and the rest is history.

By this time you've probably heard someone in your life hyping up this Netflix show about racing. And I get it, you probably nodded your head along and told them you'd "add it to your Netflix list" just to end the conversation. BUT, Drive to Survive does a phenomenal job of breaking down the sport simply while also showing the various in-depth storylines for the entire season. At the end of the day, every single person is driving on Sundays for not only their job, but the jobs of hundreds of workers throughout the company that spend day and night trying to make the best possible car. Also, to add even more spice, teammates are their biggest rivals. Since you're both in the same car, the better driver will be very evident. It's not like other sports where you want your teammates to succeed, which ultimately helps you and the team. You want them to succeed enough to help the team, but not faster than your scoring.

The show does an unbelievable job of introducing each F1 team by interviewing the drivers, principal, factory/campus and sometimes even CEOs. You learn about the entire organization, top to bottom and what goes into the car, This was the biggest surprise to me - I never really thought about how many hundreds of people it takes to get a Lewis Hamilton or Max Verstappen safely able to drive 250 mph on the Monza Temple of Speed.

You also realize that every one of these people, seemingly at the top of the world, face daily struggles with car issues, travel issues, fitness issues, you name it. Like anything else in life, once you learn more about the people behind the sport, your interest increases tenfold.

Also, Formula 1 thrives on drama and storylines, Every race there's seemingly 5-10 different major storylines to focus on. Will Verstappen overtake Hamilton? Will McLaren push for the third seed in the Constructor's Championship? Will Haas finally not finish last?

Fans can get lost in the lust of the podium finish, but there's always very intense races happening in the midfield which can make or break a driving team. For example, Formula 1 is all about money. Money dictates which drivers you can sign and also how much research and bodies/brains you're able to hire to build your car. The higher your team finishes in the Constructor's Championship, the more money you're allocated from Formula 1. Therefore, Ferrari securing the 3rd seed over McLaren will pay off massively for them in 2022 by giving them more resources at their disposal.

Max Verstappen winner the Driver's Championship was also ENORMOUS for the sport because now Lewis is still chasing his 8 Championship, which would solidify Hamilton has the best F1 driver of all-time. Right now, he's tied with Michael Schumacher with 7 titles. Also, it's nice when you have some mixup at the top of a sport - Mercedes domination for a decade is more boring than counting sheep.

So even though I watched a ton of F1, there's still A LOT of shit I don't understand. Let's talk about it:

I'm either the biggest idiot or the smartest guy ever for this idea. My money is on the former.

We almost saw the worst ending to an F1 season possible - a Safety car lap finish. If a safety car is deployed, why do the laps still count? I understand this is the same in Nascar, but won't don't we just add more laps at the end?

From what I've been told it's a fueling issue and since there was a fire in Formula 1 during a re-fueling, they only put enough fuel in the car for x number of laps. So why not increase this number by 3 or 4 and just have extra fuel in case? Thus, we don't have any more safety car endings.

How do drivers get recruited to certain teams? Is it like College Football where Nick Saban is scouting the biggest and strongest 8th graders in Alabama? I know drivers have Formula 2 teams but I don't understand this part of the sport at all. I equate it best to minor leagues in baseball, but I have no idea if that's a good comparison.

Why the fuck was George Russell in a Mercedes on "loan?" Why would Williams allow their best driver to race for a competitor? Is it strictly a money bribe?

First, why isn't it just spelt 'tire?' The first tweet I saw of a 'tyre' - I thought to myself, wow what an idiot. Who misspells the word tire? Then, I realized the hard truth. I was the idiot after all. It was tough looking at myself in the mirror that day.

Also, I find it fascinating in the different strategies used: why does Mercedes always seemingly leave their driver out too long on tyres while Red Bull seems to have perfected the 2 pit-stop strat? Different teams have their drivers start on different tyres and implement entire strategies around the race.

Not all heroes wear capes and these individuals prove it. Who the hell is actually setting up the race track and turning Monaco from a beautiful city into a race track?

The amount of production that goes into these races is truly unbelievable.

How far are we from seeing an American driver? I've heard we're basically as close as the Giants are to making the Super Bowl this year.

Alright this is a genuine question - how does one acquire the skills to join a pit crew? I'm a former 7 year Little League Umpire and the reason I bring this up is because there's legit umpiring schools and certifications. It's harder to become an MLB Umpire than it is an MLB player.

Do Pit Crews have schools to teach them these skills? Because a tyre change is 2.4 seconds is ridiculously fast.

We're getting new regulations in 2022 for F1 cars but wtf does this mean? What's changing about the cars? When I tell F1 fans that Mercedes will still probably be the best because of their sheer manpower and cash, I get told "We'll see." I'm bullish on Mercedes brainpower and Toto Wolff's passion.

The cars allegedly change every single year but they look virtually the same to me.

Are any teams on the chopping block? Haas has been struggling badly the past two years - at what point do they either really go for it and make a run at the midfield or just fold and we get a new team?

How do new teams even make a presence for themselves? F1 to me feels like a very tough sport to acquire fans if you're brand new. The best strategy would be to sign a fan favorite and hope he brings over his following.

F1 captivated me in a way that no sport has done in quite some time. Yes, I'm a New York fan so that's not saying much these past few years, but the sport itself is unbelievably entertaining and it's on at the perfect time. It simply doesn't compete with anything besides sleep - Saturday and Sunday mornings are only challenged by hangovers, but it's the excitement of F1 that draws me into every race.