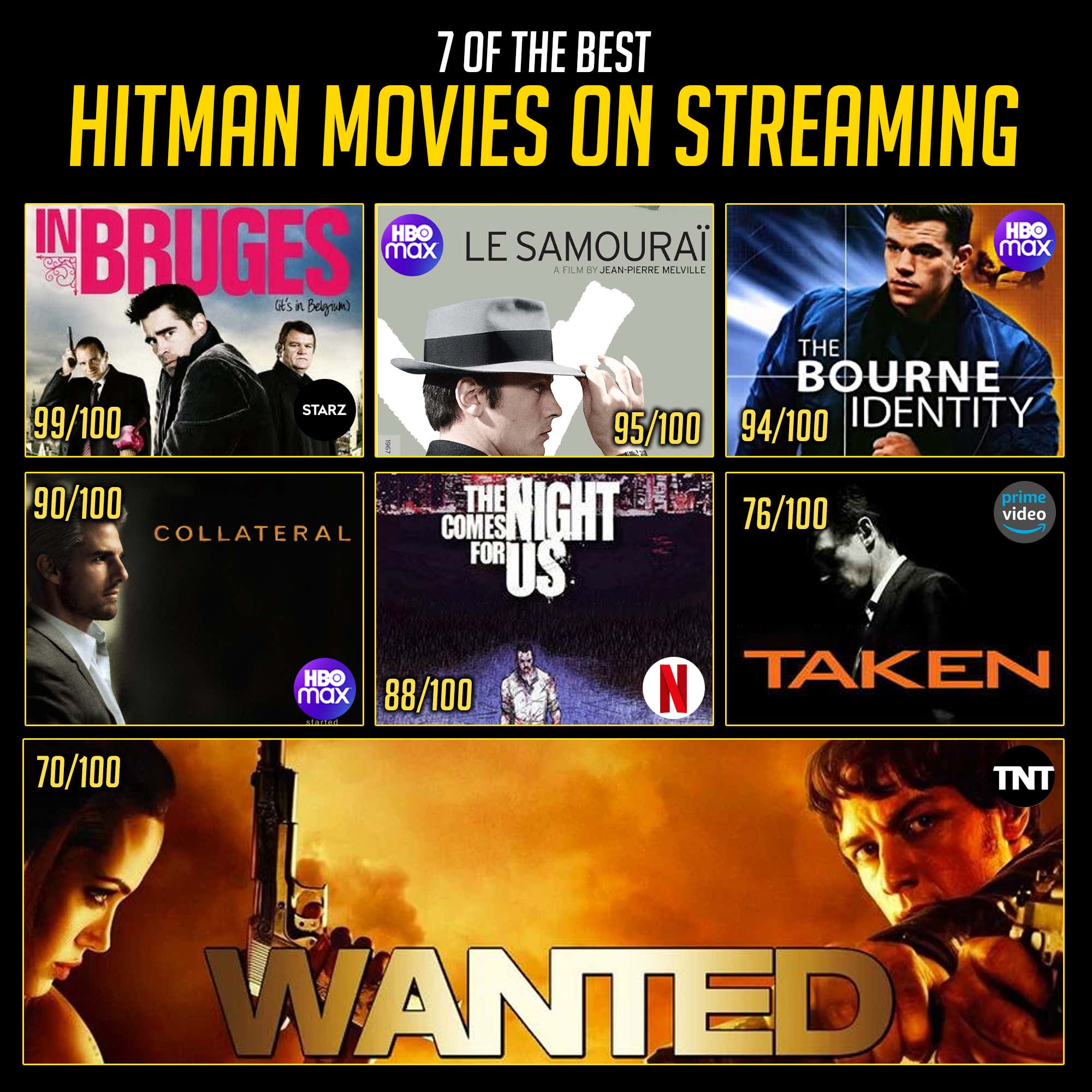 Ray and Ken, two hit men, are in Bruges, Belgium, waiting for their next mission. While they are there they have time to think and discuss their previous assignment. When the mission is revealed to Ken, it is not what he expected.

This is one of my favorite dark comedies of all time. Really smart, and probably career best performances from everyone involved. It's also downright hysterical, as you can see below.

After carrying out a flawlessly planned hit, Jef finds himself caught between a persistent police investigator and a ruthless employer, and not even his armor of fedora and trench coat can protect him.

This is an oldie and French, but don't turn that speedbump into an impossible mountain. It's one of the best assassin movies of all time and is basically the dictionary example of noir.

Wounded to the brink of death and suffering from amnesia, Jason Bourne is rescued at sea by a fisherman. With nothing to go on but a Swiss bank account number, he starts to reconstruct his life, but finds that many people he encounters want him dead. However, Bourne realizes that he has the combat and mental skills of a world-class spy—but who does he work for?

Whenever I recommend a Bourne movie, I always add the caveat that the shakycam doesn't look quite as good in retrospect. However, it is still an awesome story and the action is fun as shit regarded of how dated it might feel.

Cab driver Max picks up a man who offers him $600 to drive him around. But the promise of easy money sours when Max realizes his fare is an assassin.

I say this in the straightest way I can: I am in love with a Mann. Michael Mann, that is. Collateral fucking rocks and is one of Tom Cruise's all-time best performances. I pray to Xenu every day that his managment handlers let him play villains again, because  they are some of his best roles.

After sparing a girl's life during a massacre, an elite Triad assassin is targeted by an onslaught of murderous gangsters.

This is an Indonesian movie that those of who who have seen 'The Raid' will probably like. It shares some cast members and features some of the most hyper-violent fight scenes you will ever see from real life martial arts fighters.

"While vacationing with a friend in Paris, an American girl is kidnapped by a gang of human traffickers intent on selling her into forced prostitution. Working against the clock, her ex-spy father must pull out all the stops to save her. But with his best years possibly behind him, the job may be more than he can handle."

The franchise may have been watered down over time, but the original still fucks without a doubt. Solid action & killer lines, what more do you need?

Doormat Wesley Gibson discovers that his recently murdered father – who Wesley never knew – belonged to a secret guild of assassins. After a leather-clad sexpot drafts Wesley into the society, he hones his innate killing skills and turns avenger.

This is obviously not on the level with some of these other movies, but it is a fun movie for what it is. Ridiculous, sexy and over-the-top. I also genuinely love this scene.