First question: What is Roblox?

Roblox is an online game platform and game creation system developed by Roblox Corporation. It allows users to program games and play games created by other users. Created by David Baszucki and Erik Cassel in 2004 and released in 2006, the platform hosts user-created games of multiple genres coded in the programming language Lua. For most of Roblox's history, it was relatively small, both as a platform and a company, due to both co-founder Baszucki's lack of interest in press coverage and it being "lost among the crowd" in a large number of platforms released around the same time. Roblox began to grow rapidly in the second half of the 2010s, and this growth has been accelerated by the COVID-19 pandemic.

Roblox is free-to-play, with in-game purchases available through a virtual currency called "Robux". As of August 2020, Roblox had over 164 million monthly active users, with it being played by over half of all children aged under 16 in the United States.

I used to work for a company that did affiliate marketing (basically, we would collect cents on the dollar for every "click" we helped to gain for the company.) Roblox was our #1 client. Their traffic was INSANE, and we would always try to send as much of our own semi-manufactured traffic that way. (The job I had always felt sketchy. I'm sure those that know can explain it better than I can, but every day I went into that office I felt like I was doing the equivalent of Danny Devito using a drill to turn the miles back on the cars he would sell in Matilda.) It was a cash cow, and honestly when I worked on it at the time, I had no idea what it was. Now, years later, I see that it is basically a virtual reality game that everyone on earth plays? Specifically kids? Cool, okay.

Ope! Maybe not so cool? I'm not going to sit here and pretend that I know what any of this means. All I know, is that kids are on here spending thousands of dollars on FAKE VIRTUAL luxury items for their…players? Avatars? Anyway, this has been going on for a while now:

I'll be honest, the metaverse makes me want to puke. I don't understand it. I don't get paying ANY amount of money for something that isn't tangible - I know the NFT crowd won't like that, but it's true. I'm cheap as fuck when it comes to buying frivolous things. Mostly because I've always been broke in my adult life, but even spending 100 dollars on something that's online, that I'm just going to have to trust will be valuable at some point, and I will literally never hold in my hands? No way. What if I need that 100 dollars today? I'll just never get it back? I might as well set it on fire. I live my actual life on the #STREETS, not on the internet. Even Paris Hilton has come out with her own Roblox world, "ParisWorld." 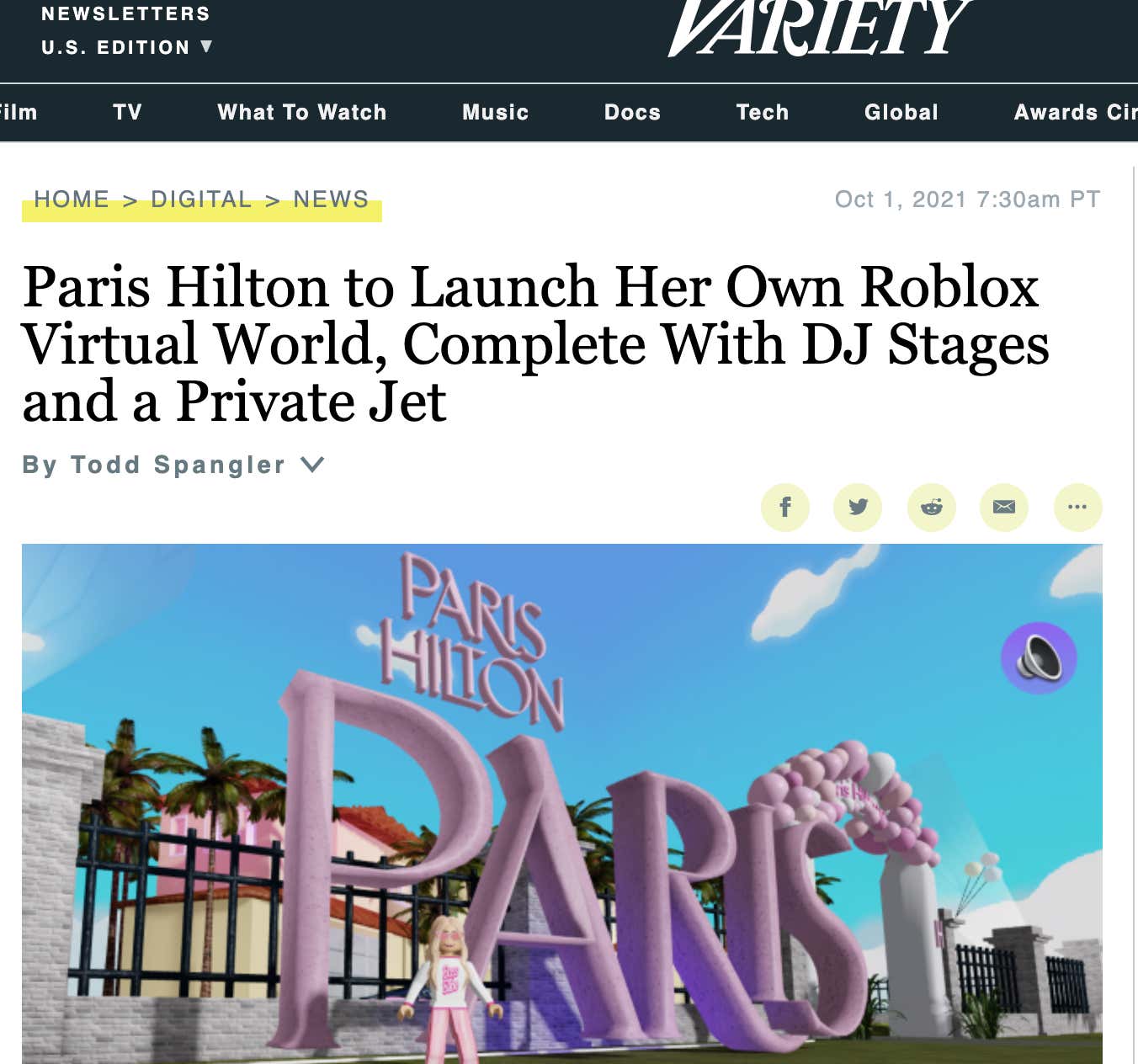 I understand that people love to blow money on useless shit. Remember how much money people spent on the Kardashian app game?

Fucking insane. But, people do it. The problem here, is that KIDS are heavily involved in Roblox. I know our girl Grace O'Malley's younger sister recently got in hot water about it…

TWO HUNDRED DOLLARS??!!?!? ON A GAME??? My parents would legitimately skin me alive. I'm not exaggerating at all. To be fair, I didn't really learn the value of a dollar until I was 23, living in my first NYC apartment, overspent my paycheck and couldn't afford toilet paper for a few days. You learn to start saving REAL QUICK when you're plunging paper towels out of your toilet twice a day.The problem now, is that kids are already thinking that luxury items are everyday items. A few weeks ago I saw this instagram from Sara Foster, posting her 11 year old daughter's Christmas list:

Dior makeup! Marc Jacobs fragrance! Prada mini bags! Obviously Sara is agreeing with how insane that is, but can you blame this 11 year old girl who lives in a world where people drop 4 GRAND on a VIRTUAL GUCCI BAG INSIDE OF A GAME, for not realizing that the only children in the real world who have Prada mini bags are the Kardashian kids? Sure, the Fosters are more famous than the average Joe, but a Prada Mini bag is about $950. I personally can't think of a bigger waste of money, spending 1,000 dollars on a bag that isn't even leather, but people love it:

This is the example I always use when I'm talking about people who literally only care about labels. I can't pretend I didn't focus on labels only when I was in middle school/high school, and if I walked into 9th grade with this bag, I would've been the shit, and everyone would think I was rich. Other than that - a boring bag, in nylon, for a thousand dollars? There are better ways to flaunt your wealth, and there are WAY better bags for a thousand dollars. I once begged my parents to buy me a $300 Coach bag in 7th grade, and they got it for me. I can't believe they let me have it. I was the talk of the town. I brought it with me 24/7, I barely took care of it, and the only reason I cared about it was because I knew it was 300 dollars. Imagine doing that, but spending ONE THOUSAND DOLLARS? Insanity.

I don't really know what the moral of the story is here. Kids are doomed? Parents are even more doomed? How can you possibly keep up with the Joneses these days? If I'm over here screaming about how virtual purchases are a waste of time, imagine a kid trying to explain the value of it to their parent, someone my age, or older? My brother could barely convince my parents that Nintendo Gamecube and the Nintento Wii were different, and that he needed both. All I know, is that I'm continuously reminded that I need to be grateful for the fact I am not raising kids right now. I've officially passed into the realm of "parents, they just don't understand," especially when it comes to money. My kid asks for a 4,000 virtual bag? Sounds like they're going to need some "virtual" food and a "virtual" home first, when I kick their ass out of my house for even suggesting it.