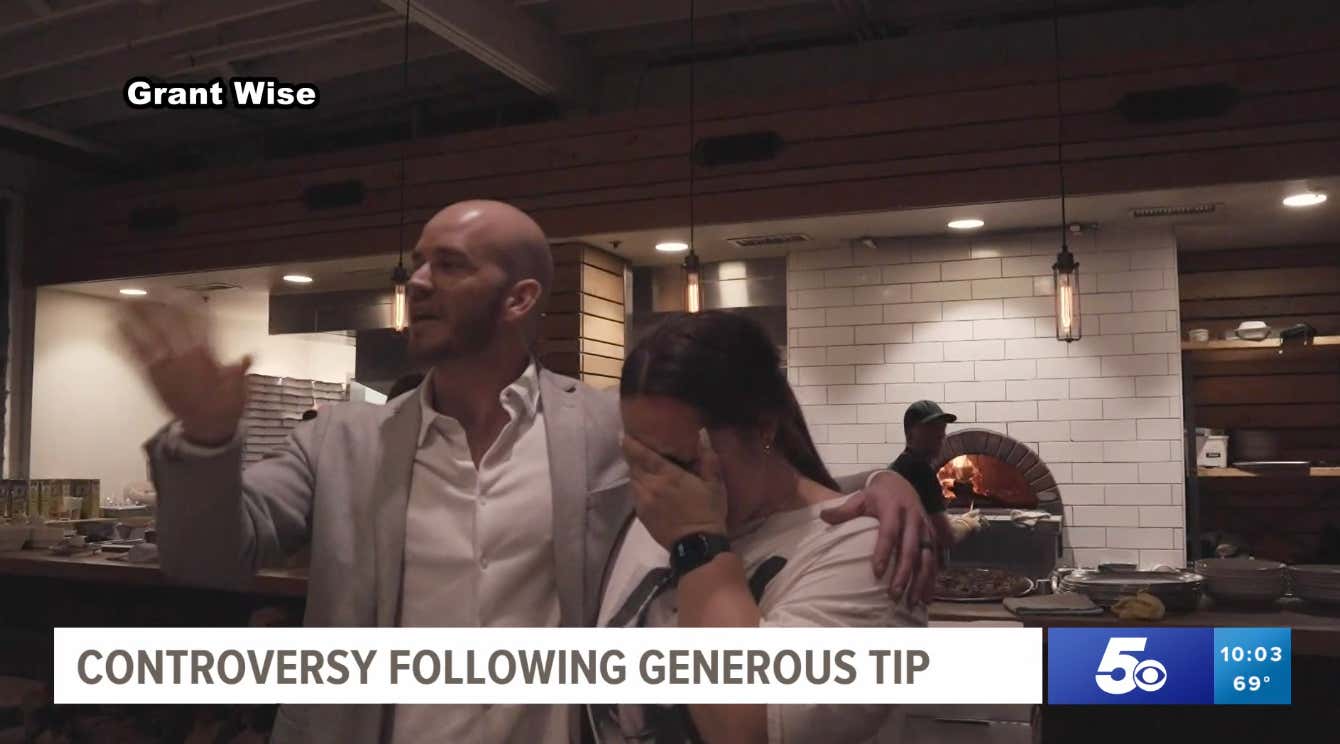 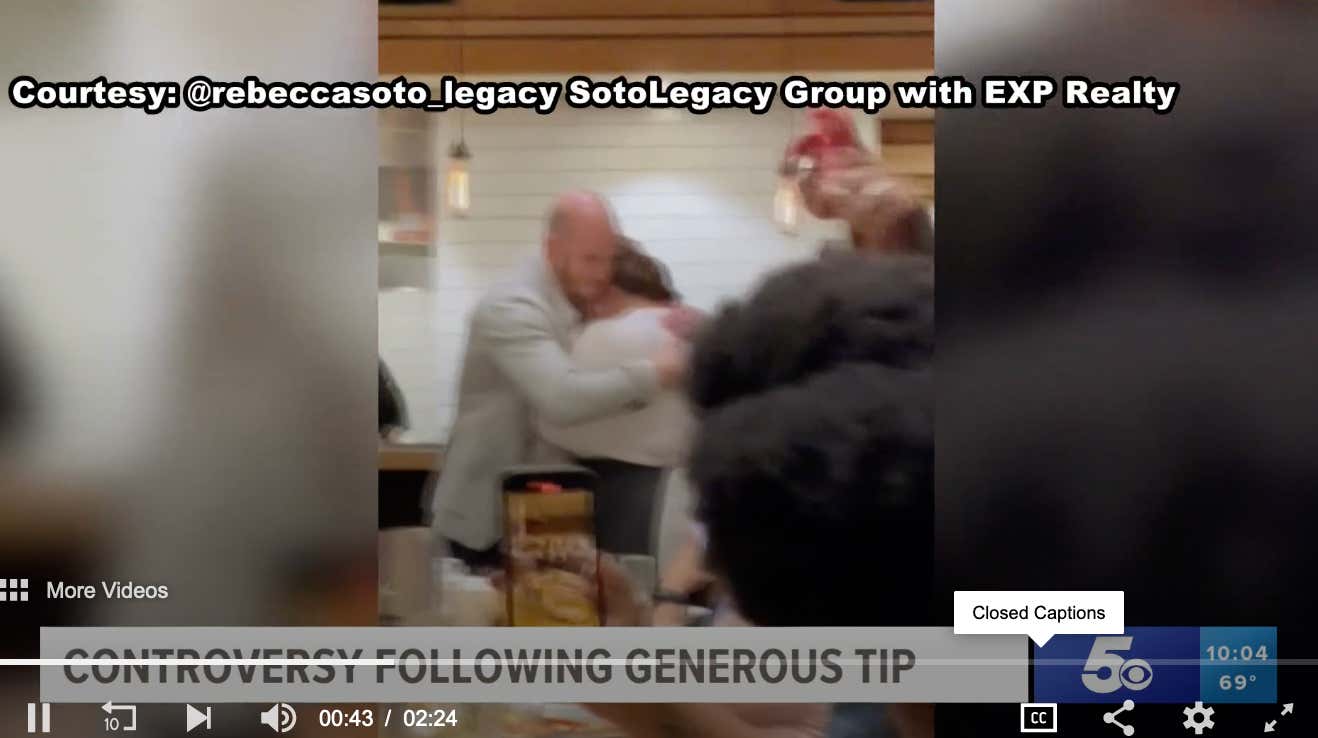 Anyone who has ever worked in restaurants/seen the movie Waiting know the extensive myriad of ways one could find themselves fired a few short weeks before Christmas.

One thing that nobody has ever had to fear getting them axed?

NY Post - An Arkansas waitress received a whopping $4,400 tip, only to be fired after her manager made her spilt it with other staffers, according to reports.

Job-security at a restaurant gig has always been of the "highly insecure" variety. And that was before Covid absolutely ravaged the industry. If your doors are even still open after all the knee-jerk bans and haphazard lockdowns, sure, maybe you can consider yourself lucky, but you're probably too stressed knowing you're one more Greek letter away from doing it all over again to really count your blessings. Not to mention you got so many people hesitant to go out and eat indoors whether your doors are open or not.  When your livelihood depends on tips from paying customers that you're not sure are coming, at a restaurant you're not sure will remain open…. suffice it to say, it's an especially anxious time to be a part of the food-service workforce.

So imagine how good it's got to feel, during the holiday season, to not only find yourself working a huge party, but being rewarded with a $4,400 TIP for your hard work?!?  Because, luckily, there are people out there who recognize situations like this and find themselves in a position to help:

The generous gratuity came on Dec. 6, when waitress Ryan Brandt and another server worked a party of more than 40 at Oven and Tap in Bentonville, Fox 59 reported.

Each diner had chipped in $100 in tip money — believing the total would go to both servers.

"We knew servers really hit hard through COVID, and it was something that we had come up with to help give back,” Grant Wise, who dined at the eatery following a conference in town, told CBS 5.

“It was an incredible thing to do and to see her reaction was awesome, to see what that meant to her the impact that it’s had on her life already,” says Grant Wise.  (KNWA)

What a feel-good story huh?  Sure there is kind of a patronizing, white-knight vibe around the "$100 Club" optically, but hey, for an over-worked and under-paid server a few weeks before Christmas, $4 grand is $4 grand.

I bet it will be a double-whammy too when her managers find out about this job-well-done — I don't want to jinx it, but could we be looking at possibly…an Employee of the Month plaque here, or something similar?

First, they told her she could not, in fact, keep the tip she and her partner earned.

…the restaurant’s manager instructed Brandt to pool the tip with her co-workers who didn’t serve the large party,

“I was told that I was going to be giving my cash over to my shift manager, and I would be taking home 20 percent,” Brandt told the network.

Ok well, it's not exactly unheard of, plenty of restaurants pool tips. I mean it's done in the interest of keeping things fair on a normal night when people leave 15-20% tips on their bills usually, not when 2 servers work a 40-person party and are singled out by name and personally tipped by the customers. But, I guess if there's such a well-known, set-in-stone policy that everyone knows…

Brandt says the restaurant asked her to share the tip with her co-workers. Something she says has never happened in the three and a half years she worked at Oven and Tap…

…she told Fox 59 was unprecedented in her more than three years working there. Brandt says this money typically comes out of her paycheck, not the cash she leaves with at the end of the night.

He-said, she-said? Not exactly — Mr. $100 Club himself said he called ahead of time specifically checking to make sure this wasn't a policy there.

Wise owns the real estate company Witly. He says he called ahead to the restaurant and asked about the tipping policy, to make sure everything would go smoothly.But he says, things did not go according to plan.

For his part, when he found out this was no longer being honored, he asked for his money back, then gave it -- his money -- to who he wanted to give it to.

When Wise, who owns a real estate company called Witly, found out, he demanded the restaurant return the tip money — then turned over $2,200 directly to Brandt. Wise says pooling tips with those who didn’t wait on his party, was not his intention.

As for the managers who may-or-may-not have been caught with their hand in the cookie jar here…they apologized for trying to commandeer this generous tip against their customer's wishes, and congratulated Brandt on a job well done.

No sorry I read that wrong, they fired her.

Brandt says she shared with the $100 Club that she wouldn’t be able to keep her portion of the money without splitting it with the entire restaurant, which she says led to her firing. …Brandt says the restaurant told her she was let go because she violated policy by telling Wise about pooling the tips.

They insist though, it has nothing to do with this whole tip thing…them being embarrassed while unsuccessfully trying to steal her money had NO bearing on the firing. It was based on a bunch of other stuff that happened that they WISH they could talk about they just can't, it wouldn't be right, they legally can't talk about terminations…

Brandt and her attorney signed a release that permitted both owners to share why she was fired; they still felt it wasn’t their place to comment.

Good for the Oven and Tap — snatching some horrible publicity from the jaws of a feel-good story, just in time for Christmas.

“They fired me from Oven and Tap over the phone and I’ve been there for 3 1/2 years and that was really heartbreaking,” Brandt told CBS 5. “Especially because I didn’t think I did anything wrong.”

“It was devastating, I borrowed a significant amount for student loans. Most of them were turned off because of the pandemic but they’re turning back on in January and that’s a harsh reality,” says Brandt.