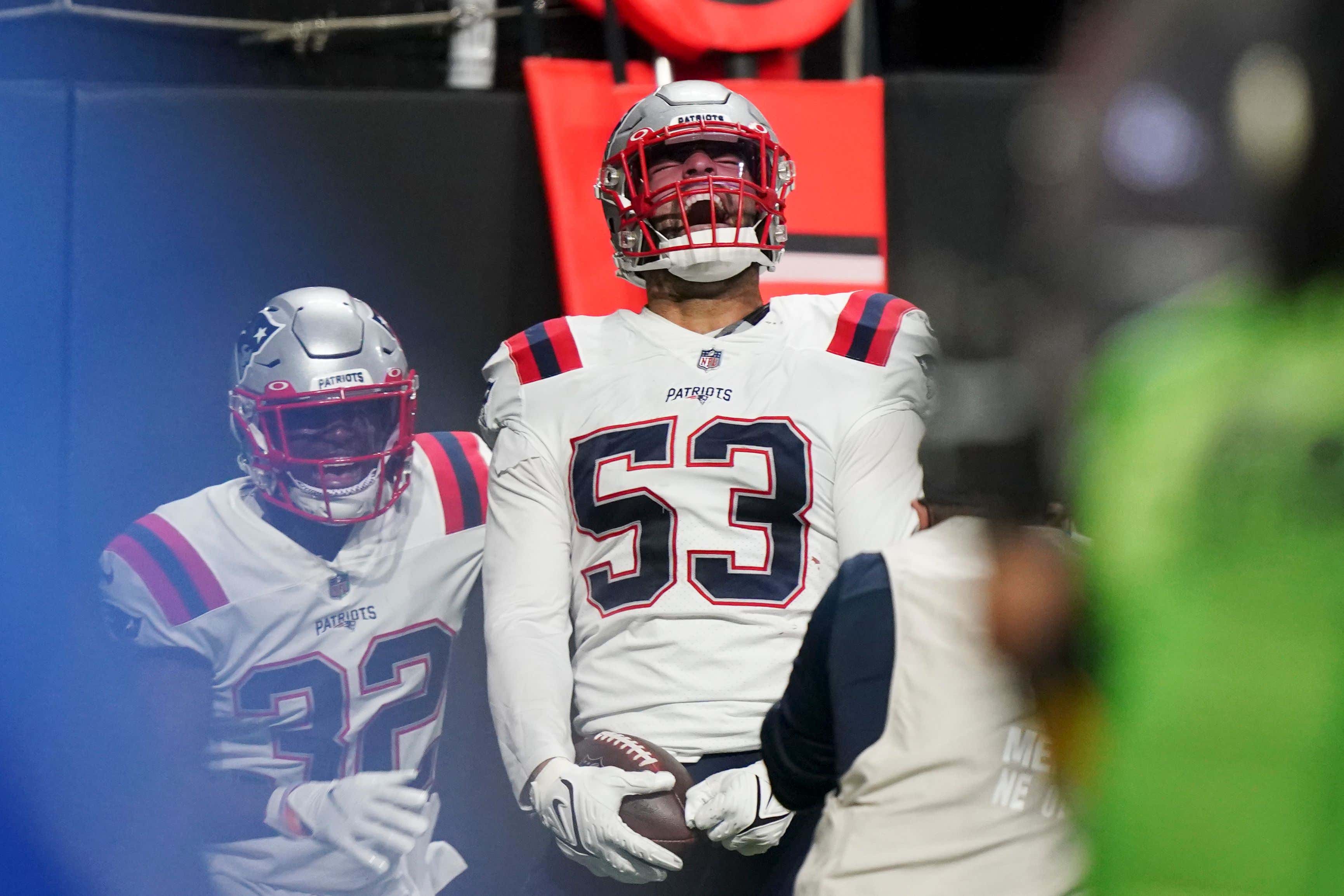 Of all the NFL veterans who've come and gone in Foxboro over the latter stage of the Patriots Dynasty Era, few have meshed as perfectly into the team, the system, and the culture the way Kyle Van Noy has. However he was used in his other career stops, in his two tours of duty in New England, he's played like a part that was custom fitted to make the whole mechanism function at peak efficiency. Both on the field in the middle of the defense, and off it, as a team leader who understands how business is done here and has been since the days of Willie McGinest and Tedy Bruschi.

As such, Van Noy is as good a choice as anyone to give us a sense of Mac Jones and how he's perceived in the locker room. Which he did on Chris Long's podcast. The whole conversation is worth watching, but I've got this cued up to the 10:30 mark, when they start talking Jones. When KVN gives what Long correctly describes as "a ringing endorsement":

When asked about the story Peyton Manning told on the Manningcast about texting Jones on a Wednesday only to hear back from the rookie on Friday with an apology because he stays off his phone all week, Van Noy says,

"100%. That's Mac Jones. I'm not even shocked. Buddy is - Chris, When I tell you Buddy loves football and he’s, like, a Patriot - that is him, bro. I love him, too. He’s good. He’s really good. I’ve been impressed. For being 23, to handle the things that he’s handled, to be respectful, to get the teammates — like, he’s cool with all the teammates, vets, younger guys — it’s impressive, bro. That’s tough to do."

And when asked if there was a moment when Jones first impressed everyone to the point they realized he was ready to lead this team, Van Noy mentioned the week of joint practices with the Giants, leading up to the final preseason game. That was when Cam Newton had to sit out for running afoul of the NFL's rules for non-vaccinated players due to "a misunderstanding":

"What’s been impressive I would say with Mac is, and I don’t want this to sound bad or anything, but when Cam was out for that week, and it was the day before we went against the Giants, he was balling against us. It was like, ‘Oh, this dude’s good.’ His development, the way he wants to work and attention to detail like you said a moment ago, is impressive, and he’s only going to get better. The more he sees it, he’s like, ‘All right, I saw it. I can diagnose it again. I’m good.’ The more he can see reps, the better he’s going to be. It’s going to be impressive to watch, and I’m very, very happy I’m on his team.”

Clean up in Aisle Jerry.

If you're going to pick one moment when it felt OK to fall in "love" with this guy, it's hard to think of a better one. Truly. After having a few impressive practice sessions in camp, with the occasional crap day mixed in while Newton was running the first team offense, that was the practice where the team was all Jones'. And if hadn't won the QB1 job to that point, it certainly felt like he did after.

While selflessly braving the heat on a day where I compared the media tent to the hot box from "Cool Hand Luke" just to bring you my first hand account (and I ask nothing in return), here's what I saw that day:

If there was any questions remaining about whether Mac Jones was going to take advantage of the situation presented by Cam Newton choosing the Covid jab over his starting job, it could not have been asked and answered more loudly than did today. Actually, over the last couple of days.

During Tuesday's team practice, he threw an astonishing 40 passes. Today, in joint practices with the Giants, he threw north of 50. In every type of practice scenario imaginable. Goal line 7-on-7s. Situational reps in 11-on-11s. Full squad, game condition scrimmages with a full team of officials calling them like a regular season game. Two minute drills. The coaching staff of both teams emptied their clips and then threw the empty gun at him. And I'm not exaggerating when I tell you he threw so few incompletions that you can practically recite them. Particularly in the game condition reps, you could give his missed passes the names of "Friends" characters without ever getting as far Chandler.  There were that few of them. …

Still, my personal favorite Jones throw came in hurry up late in camp, when an unaccounted for pass rusher came free. And by free, I mean about a Hadron Particle Collider reaction after the shotgun snap got in his hands. But he reacted, shifted his feet to the outside, and beat the rush with a safe throw to his hot route, Isaiah Zuber on the sidelines. Which is exactly the kind of play that the ancients referred to as Rookie Quarterback's Bane. But he handled it like a veteran. A good one.

And just to keep patting myself on the back because I forgot I'd written this until I read it just now:

[I]f I had to guess, I'd say the best free agent they signed will be Judon. He's active in every aspect of what Bill Belichick's system asks of its edge defenders. Rushing, dropping into coverage, turning outside runs back toward the defense. I'm not sleeping on Jonnu Smith or Hunter Henry. I just think Judon will have a bigger impact.

But I'll take a break from congratulating myself on my brilliant powers of observation. Instead, I'll just leave that to the rest of you and get back to Van Noy's impressions of Jones.

This is a guy who has seen a lot in his career. He's played with quarterbacks that run the gamut from a rookie Tua Tagovailoa to Ryan Fitzpatrick to Matthew Stafford to the GOAT. So he knows of what he speaks. And in this one, he's known since before the season began that the Patriots had found the right one. A guy who took the opportunity he was given to win the job, and has spent the whole time since he did working hard, developing, learning, and earning the trust and respect of teammates, old and young alike. In other words, fitting into the offense the way Van Noy fits into the defense.

And the best compliment of all the ones Van Noy paid him? Calling Jones "a Patriot." Lord help me, I do love the 2021 edition of this team.