VF - The government’s case against Ghislaine Maxwell ended on Friday with the testimony of Annie Farmer, the fourth accuser to testify in the British heiress’s federal sex-trafficking trial and the only to do so using her full real name, and two corroborating witnesses. Maxwell has been charged with recruiting and grooming underage girls for Jeffrey Epstein’s sexual abuse, and Farmer has been one of the pair’s foremost and most vocal accusers in recent years. The story she told on the witness stand was disturbing in its familiarity.

After Farmer testified—and her mother and a man she dated in high school corroborated some of the details of her account—the prosecution rested its case as it signaled it was ready to do earlier this week. The timing has come as something of a shock to even veteran court observers. Maxwell’s trial was originally expected to last up to six weeks, but prosecutors said on Tuesday that they expected to rest their case as early as Thursday—only for an attorney involved in the trial to fall ill that day, pushing back the proceedings to Friday. The announcement compounded the growing sense that the prosecution’s case was thinner than expected for such a high-profile affair, and it evidently surprised Maxwell’s attorneys too. On Wednesday, defense lawyer Christian Everdell told Judge Alison Nathan, “given that they have now trimmed their case significantly in the last day, we are trying to hustle witnesses,” and that Maxwell’s team needed some time to prepare their case. Nathan agreed to let the defense begin its case Thursday next week, and said that the court wouldn’t sit Monday through Wednesday.

Four fucking witnesses that were victims, plus 17 associates, and a case laid out sparsely over a measly ten days in two weeks by the U.S. Attorneys who had two fucking years to prepare for this case.

515 days from when she was apprehended hiding out in a safehouse, off the grid, in the middle of nowhere New Hampshire, with a small army of armed guards.

The media, the government, and “sane people” love to label skeptics "conspiracy theorists". But when you mail it in as egregiously as the US Attorney's office has in this case, how can you expect people- level-headed, rational thinking people, to not say this is bullshit?

What should have been a slam dunk case, looked instead like the prosecution grasping at straws. It's embarrassing.

(oh yah, and it's worth mentioning one of the prosecutor's on the case is James Comey's daughter)

The victim-witnesses appeared extremely unprepared for cross-examinations. The prosecution hung them out to dry completely.

These women could without a doubt testify about Maxwell’s role in the alleged sex trafficking operation. Why didn’t the government force them to cooperate against Maxwell by offering immunity or by charging them too if they refused?

I wasn't pre-law at FSU but this is day 1 law school stuff.

I can see if they rested their case after only calling four witnesses if those four witnesses had Maxwell dead to rights with their testimony. So buttoned up that they caught the defense with their pants down, unable to walk anything back with cross-examination.

But it was the exact opposite.

The defense chewed them apart on the stand, catching them up in double talk, confusing them, and making them look unprepared, allowing the sense of incredibility and distrust to creep in.

Unfortunately, prosecutors didn’t follow up and ask Carolyn to name Epstein’s friends. Carolyn’s gut-wrenching testimony was also undermined by a seeming lack of preparation by the prosecution. Under cross-examination, one of Maxwell’s lawyers, Jeffrey Pagliuca, exposed inconsistencies in Carolyn’s prior comments on the case. Pagliuca noted that Carolyn didn’t mention Maxwell’s name once during her first interview with the FBI in 2007. Victims of sexual abuse or rape often change their stories as they process trauma. This fact is often spun by defense lawyers to undermine a victim’s testimony. But prosecutors should have prepared Carolyn to address the issue head on.

The worst part is the team that did the Netflix documentary Filthy Rich did all of the work for them, digging up tons of victims who were more than willing to go on the record, by name. 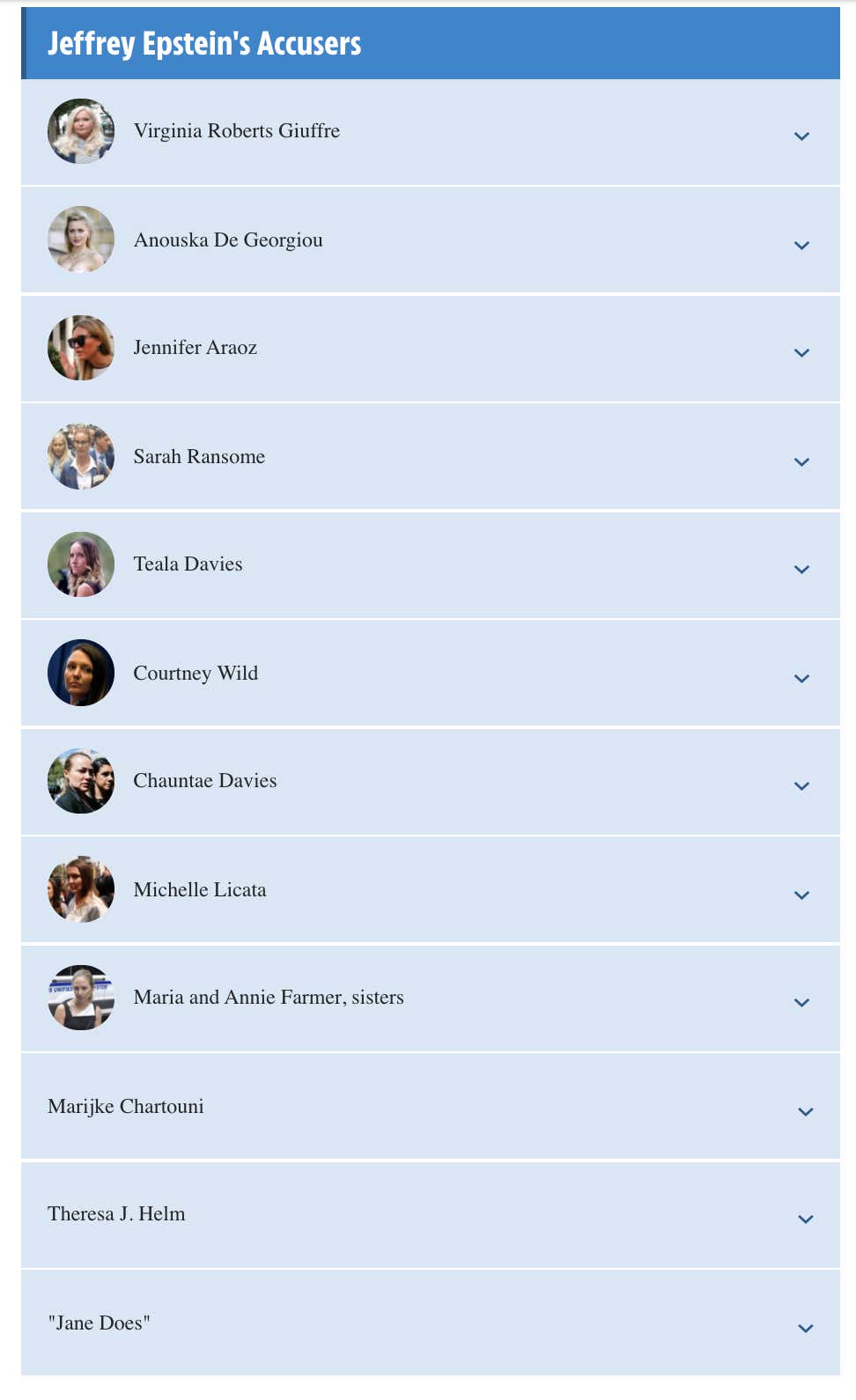 Most notably, the prosecution never had Epstein’s highest-profile accuser, Virginia Roberts Giuffre, to the stand. Despite her being mentioned numerous times in testimony from the other witnesses, and her being at the center of the Prince Andrew accusations and lawsuit. No big deal.

The prosecution should be ashamed of themselves.

For perspective, Maxwell’s attorneys, who were caught off-guard when prosecutors rested their case more than a week early, said they plan to call up to 35 witnesses when her defense begins tomorrow.

Among their 35 witnesses are three who have said they won't testify unless they are allowed to do so anonymously, like three of the prosecution's witnesses were able to do.

But the prosecution's case stank to high heavens even before the first witness was called, which who by the way wasn't even a victim. It was Epstein's God damned pilot Larry Visoski! Everybody on location reported that his testimony read and sounded more like he was a defense witness than anything else, claiming "he never saw Epstein engage in any sex acts with the underage girls on his planes."

But back to the first part, this thing took a nose drive right from the jump. When prosecutor Lara Pomerantz’s opening statement lasted a ridiculous 35 minutes. A federal trial, one of the biggest in recent history, with dozens and dozens of victims named, and you trot out a measly 35-minute opening statement?

For perspective, the government's opening argument in the U.S. v Elizabeth Holmes trial was 50 minutes long.

But maybe we're actually in the minority here for thinking this is a big case?

I mean there has been a record turnout of media, and not in a good way.

I mean nobody knows better what we should pay attention to and what's not worth devoting camera crews and reporters to better than the Mainstream Media right?

This guy has been doing a good job documenting the case-

Then there's the whole bit about a couple of the independent "media" outlets being censored on social media. Namely, @trackertrial on twitter.

As has this guy

And this lady, who knew that media coverage would be a complete farce for this trial, so she flew from California and put herself up in NY for two weeks to cover it herself. She's currently home before court reconvenes tomorrow.

Perhaps the only good thing the prosecution has done in this case was uncover never before seen photos.

New photos were released showing just how friendly these two were

And the warlocks she's been hiding in all her formal pics.

News came out last week, via Maxwell's brother, that she also believes Epstein was murdered.

Among the bones broken in Epstein’s neck was the hyoid bone, which in men is near the Adam’s apple. Such breaks can occur in those who hang themselves, particularly if they are older, according to forensics experts and studies on the subject. But they are more common in victims of homicide by strangulation, the experts said.

She knew the guy better than anybody (that wasn't a former President or Royal), and she is convinced he would never off himself.

Again, this entire thing stinks. But I don't know why any of us are surprised. The difference between the real, "elites of the elites" and the rest of us is inconceivable.

I hope I'm dead wrong, but don't be surprised when Maxwell gets off with a few years probation, or the jury is hung, or some other shady outcome is found. It will probably be read at 7 or 8 pm on a Friday night, hit the news cycle for 24 hours, and then be buried under more important agenda-driven issues.

p.s. - One of the last couple tweets on the Maxwell Tracker Twitter before being taken down

Ms Maxwell’s defense attorneys came to an agreement with prosecutors over the weekend not to release the 97-page directory to the public.

Judge Alison Nathan had previously said she wanted to avoid “needless” namedropping during the trial.

The book was filled with contact details of Ms Maxwell and Jeffrey Epstein’s famous friends, including Prince Andrew, and former US presidents Bill Clinton and Donald Trump, and had been mentioned sporadically during her sex-trafficking trial.

Several entries were mentioned during the prosecution case and released as an exhibit under seal, meaning only jurors and attorneys could view them.

Everything surrounding this Black Book has been shady from the start. Epstein's butler Alfredo Rodriguez admitted to stealing the book as “insurance”, when he got arrested for trying to sell it to an undercover FBI agent for $50,000.