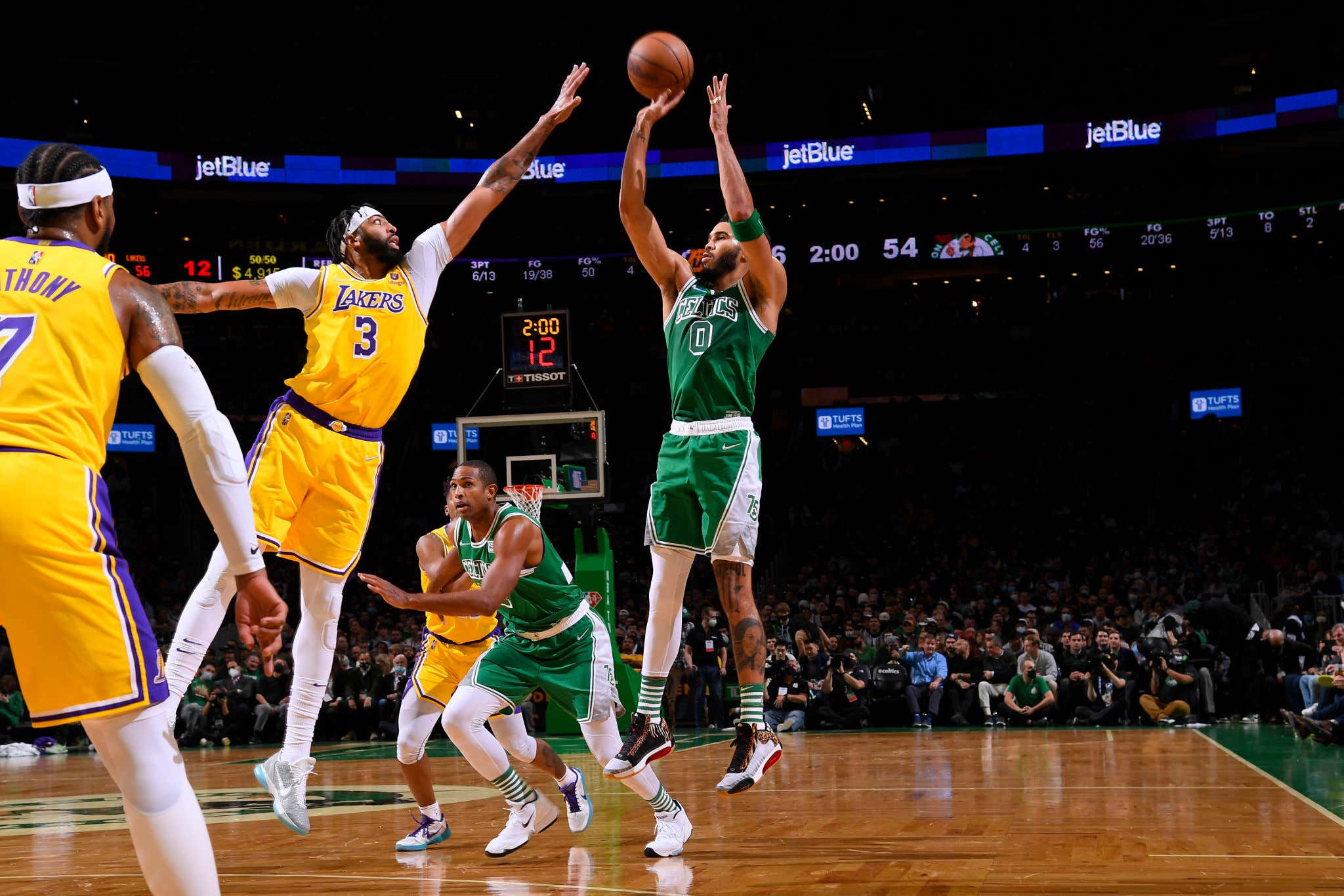 The last time we saw the Celts play their rival, they were 7-8 and coming off a thorough ass kicking by the hands of the Atlanta Hawks. They were showing flashes, but hadn't really figured shit out yet and were still wildly inconsistent. Jaylen Brown was out with an injured hamstring, LeBron was back giving the Lakers their full roster, and the Celts promptly kicked the shit out of them to the tune of a 130-108 home win. It was glorious just like beating the Lakers will always be.

That was on November 19th. Fast forward to December 7th and we have the rematch and final matchup between these two teams unless they both somehow make the NBA Finals. Jaylen Brown is still dealing with his hamstring injury and might not play, but overall both sides should be good to go. This time around, the Celts as a team look a whole lot better. Since that Hawks game, they're 6-3. Over the last month, the Celts find themselves near the top of the league in wins, defense, net rating, etc. Shit, even their offense is 13th in the league and they can't score! At the same time, this is not LeBron's first game back. He'll be better, you can bet your bottom dollar on that. Plus, there's this

He had to make the call to Adam Silver. How sad. Lost that first game in Boston in an embarrassing fashion and had to do everything he could to make sure that doesn't happen again on his own floor while playing on national TV. Go ahead, tell me that's just a coincidence and I'll ask if you've been watching the NBA at any point over the last billion years. Whatever though, bring it on. Nothing would be sweeter than sweeping these bum Lakers even when they had to phone a ref in order to help them win.

It also cannot be understated what a big game this is for the sake of this current West Coast trip. It's your classic swing game. The entire vibe of the trip can shift based on the results tonight. The goal, at least for me, was 3-2. You win tonight, that means you just have to split LAC/PHX, and seeing as how the Clippers game is on a back to back, stealing the win tonight to go to 2-1 so far on the trip would be massive. If there's one thing we know, it's that Jayson Tatum loves playing in this building

and this is the version of Tatum we're going to have to see tonight, especially if Brown doesn't play. Even if he does, who knows what he'll look like. The good news is Tatum has been his regularly scheduled monster in the month of December so far and he torched this team for 37 points in their first meeting so you have to like his chances. The efficiency is coming around like it historically has once we get to this month, and we're seeing a version of Tatum that is much more aggressive in terms of attacking the rim. What I want to see is if he still plays that way once Scott Foster doesn't give him calls. How he approaches that will tell us a lot about what type of game we're going to see.

There's also what a win tonight could mean for the Celts overall standings. As of this morning, they woke up in the 6 spot, just 0.5 games from the 4 seed and 2.5 games from a top 3 seed. If they win tonight, they'll move to 5th. If they win tomorrow against the Clippers (4-6 in their last 10), we could see this team as high as 4th by Thursday morning. Teams around them in the standings are all playing each other right now, so the Celts taking care of their own business is very important. They have every opportunity to officially bury that pathetic and infuriating 2-5 start, but you only do that by winning. At now 11-6 since, that's exactly what the Celts have started to do.

Just like I said in the first meeting, it does not matter when these two teams play, it's always a big deal. Could be November, could be December, could be June. They hate us and we hate them. Their fans are insufferable as are we. The Celts have 17 rings and the Los Angeles Lakers have 13 depending on whether or not they want to choose to acknowledge George Mikan. It doesn't get more premiere than these two franchises. Plus it's Larry Bird's birthday!

Despite the blowout, LeBron/AD still were pretty damn effective in the first meeting to the tune of 54 points on 22-37 shooting. AD was a monster to start. Hopefully, we see that Ime has a plan for that because you know both will be motivated tonight. The Celts are going to have to figure out how to play through whoever ends up being the guy to get 2 quick early fouls in the first quarter that you know is coming, and I would love if their defense made an appearance for the first time on this trip. You can't rely on scoring 130+ like they have in the first two games. We know the key to this team is defense first, and this would be a perfect game to get back to keep teams around 100. Do that, and I like their chances.