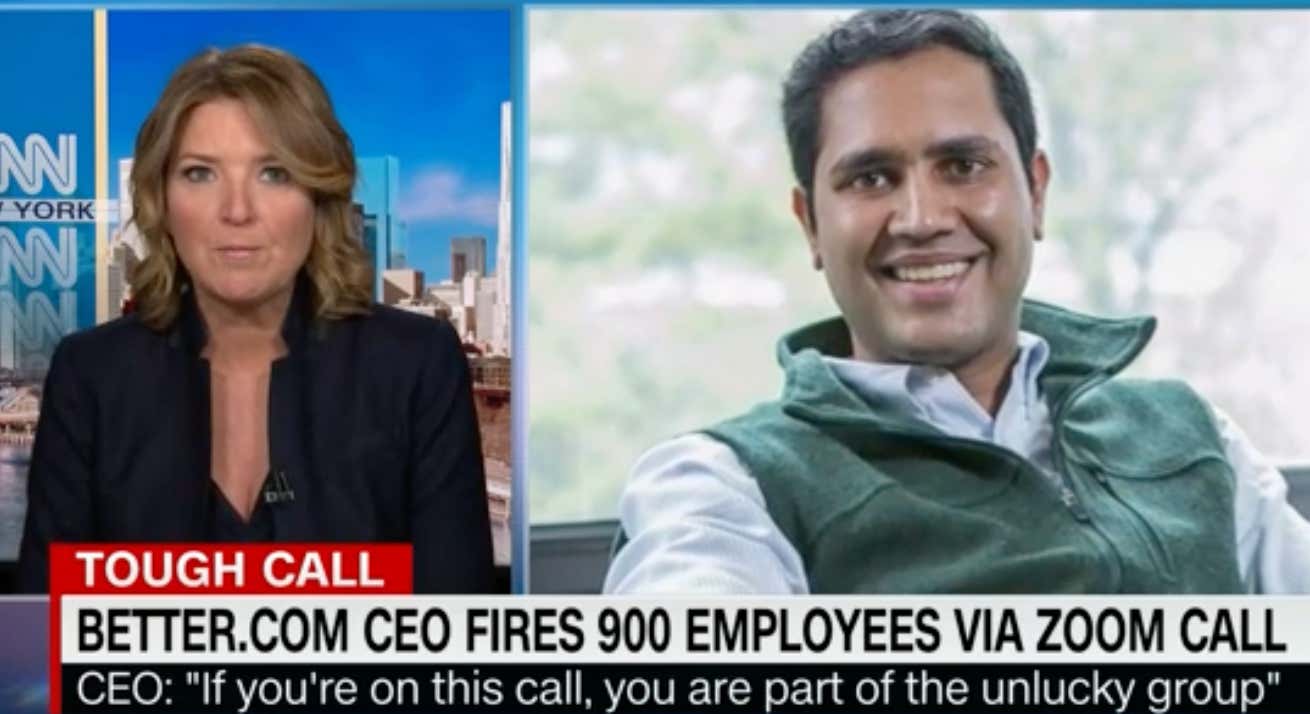 CNN - Better.com CEO Vishal Garg announced the mortgage company is laying off about 9% of its workforce on a Zoom webinar Wednesday abruptly informing the more than 900 employees on the call they were being terminated just before the holidays.

"If you're on this call, you are part of the unlucky group that is being laid off," Garg said on the call, a recording of which was viewed by CNN Business. "Your employment here is terminated effective immediately."

I've been weighing my angle on this story for a bit now. I wish I could sit here and say this CEO is a grade-A douche bag. I wish I could go on and on about how these tech CEOs are the scum of the earth, how the 900 employees deserve better, etc etc etc. But really, when I thought about it, this seems like a pretty practical way to fire 9% of your workers.

We all want Zoom to be the future right? We learned during the pandemic that doing meetings over Zoom from home in our pajamas works just as well, if not better, than sitting in a cubicle or a meeting room in an office, listening to people drivel on about god knows what. So why not fire people the same way? Ain't no need to commute into an office just to be told to pack your shit. And lord knows no HR employee in the world wants to dial up 900 separate cube monkeys to let them know they're terminated. So the solution? Have the CEO hop on a Zoom and call them an "unlucky group". What a spin! Just got a bit unlucky!

Look, when it comes down to it, nobody wants to be fired, and I do believe nobody takes joy in firing 900 employees at once. But if it's gonna happen anyway, does it really matter how it goes down? Quick Zoom meeting, waste nobody's time, wam bam thank you mam. As they say, "You can't make a Tomlette without breaking some Greggs".

This CEO is known for his…interesting style.

Garg has been involved in controversy before, as evidenced by an email he sent to staff that was obtained by Forbes.

A BUNCH OF DUMB DOLPHINS gotta be the best line ever sent in an email from a CEO. Well….almost the best line.

But I digress. Sure from the outside it seems low and cowardly to fire people that way, but man, 900 people is a lot of people and there's only so much time in a day! Work smarter not harder. Besides, when I'm eventually fired I figure it'll be on some sort of live stream or podcast and I'll find out that way, so could always be worse.