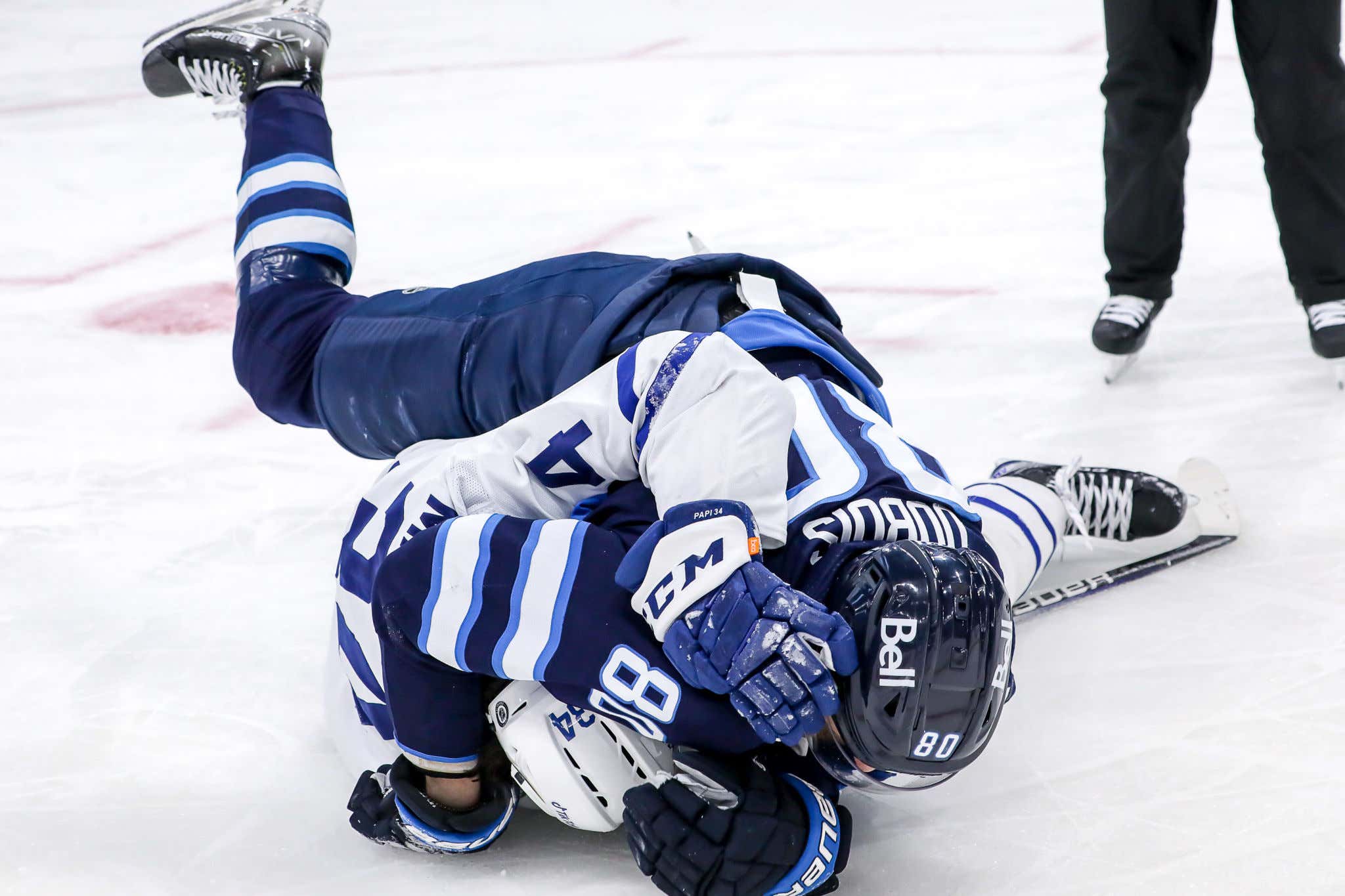 The 3rd period in Winnipeg last night was a complete and total gongshow. I'm a little hesitant to officially deem it "old time hockey" due to the fact that there was technically only 1 fight in the game. But as far as goonery goes? As far as Making Hockey Violent Again goes? Woah baby was it a good one.

So first up we have Auston Matthews and Pierre Luc-Dubois. A couple of fellas who probably got a chance to know each other decently well leading up to the 2016 Draft. Dubois already had a goal and an assist on the scoresheet so he figured who better to get his Gordie Howe Hatty against than Auston Matthews? Unfortunately they never dropped the gloves and it just ended with a tussle/manhandling.

Both guys got hit with 2 minutes for roughing. Tough blow for Matthews since he basically got 2 minutes for getting ragdolled around for a few moments. But still. Those are two of the top players in the league going at it. Both of them are top 20 in goals this year. They're 1st and 3rd overall picks in the draft. When you see your skill guys like that going to battle in the corner, it's gonna fire up the rest of the bench. It's going to up the intensity of the game. And I guess when the adrenaline is pumping and the intensity is at its peak, that means throwing your knee out to deliver an extra greasy hit for Neal Pionk.

Yiiiikes. That's a supremely shitty hit. Throws that knee out there when he realizes he's going to whiff with the body, Sandin goes down, and somehow there was no call on the ice. Obviously the Leafs are going to be pretty pissed after that. The blood lust was already on after the Dubois vs Matthews scuffle. But having to carry Rasmus Sandin off the ice after a greasy hit like that and no call on the ice? You can bet your sweet ass that Goon Season is in full effect. I just don't think you'd expect Jason Spezza to be the guy to get the party started.

Ohhhhh shit. Okay so maybe not the exact hit that Spezza was intending to deliver when he target locked on Pionk to try to send him into next week. But it's not like he forced Pionk to drop down to his knees to swipe the puck out of the zone with his hand. Spezza was already committed to fucking him up, but now it just so happened that he was going to knee the shit out of his skull. Could he have pulled up at the very end once he realized he was about to commit attempted murder? Perhaps. But he had some good ol' fashion crossed wires after the hit on Sandin so no chance. And also again, no call on the ice.

So on the very next faceoff, Toronto says enough is enough. They say it's time to end this and just let the fists settle everything. Keefe throws out his 4th line and it's time for the Wayne Simmonds Chaos Tour. Only issue is nobody wants to go with him.

Drops Harkins simultaneously as the puck is dropped, quick crosscheck to the kidney, tries to go after Svechnikov, but still no fights. Hell, he even tried to drag Logan Stanley by the ear loop into the penalty box with him. Just remember that for a little later on.

But all that came out of that was a 2 minute crosscheck and a 10-minute misconduct for the Wayne Train.

A few minutes later there was finally the first actual fight of the game. Kyle Clifford, 6'2" 214 el bees, going up against Brendan Dillon, 6'4" 220. A couple of decent shots by both guys but Clifford unloads the tank at the end.

You figured maybe that would finally settle it. Good fight, good night. But you have to remember that Wayne Simmonds still wanted in on the action. And luckily he got that 10 minute misconduct while there was still enough time left in the game for him to pick up one last shift. So in the final minute of the game, he decides to goon it up one last time. And remember what I said about trying to drag Logan Stanley into the penalty box with him?

Well Logan Stanley decides he'll finally give Simmer that scrap he was looking for and jumps in to save Morrissey from the impending beatdown. There's too much of a scrum around them for it to fully develop into a fight so they each get 2 minutes for roughing. But that doesn't stop Logan Stanley from getting the crowd fired up on his way to the locker room.

Oh and on top of all of this, it was Blake Wheeler's 1000th career game. Look at how much the captain was loving this shit on the bench.

Some guys get a watch, some guys get some expensive bottles of wine. Blake Wheeler's gift from the team for his 1000th career game was just guys being dudes and mucking it up out there. Looks like he couldn't love it any more.