What a fucking game! Dan Campbell goes from being the biggest idiot on my timeline for believing his QB could get a 4th & 1 deep in his own territory to a guy that knew the very same QB could lead his team 75 yards for a winning touchdown with exactly 0 seconds left. Do you people even analytics, bro? Scoring with no time left is the most surefire way to win a football game. If Brandon Staley did that everyone would be sucking his dick. Granted he would have Justin Herbert running that 4th down play but with numbers like this from your QB1, what's not to believe in?

Look at that vertical! 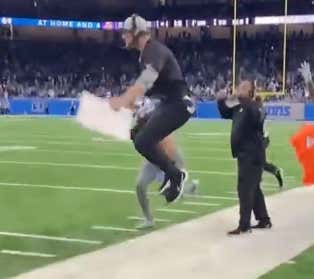 Is that Dan Campbell or Calvin Johnson? Jared Goff may have to enter the blue tent after Man Campbell got his paws into him. I can't believe we are going to be an Eagles win over the Jets away from watching this magic unfold in front of us over the next month.

I am truly thrilled for Superfan, Detroit Don, and all the other people that root for the Lions every single year no matter what hell unfolds on their TV while also saying a quiet prayer for all the Vikings fans that deal with their own special brand of bullshit every year.

Now if you will excuse me, I have to go run laps for a team that didn't show anywhere NEAR as much offense as the 2021 Detroit Lions today.