Canada eh!? Canada has turned out hockey players for a long time and tonight we head north of the border for the Spittin’ Chiclets Boost at Barstool Sportsbook.  It is an Olympic year, and we are looking for ways to bring notice to each country and tonight Canada is in the spotlight.  All 3 players are Canadian and 2 should be playing for Team Canada.  This is simple: sweep the board for +450 or make like a tree and get out of here. 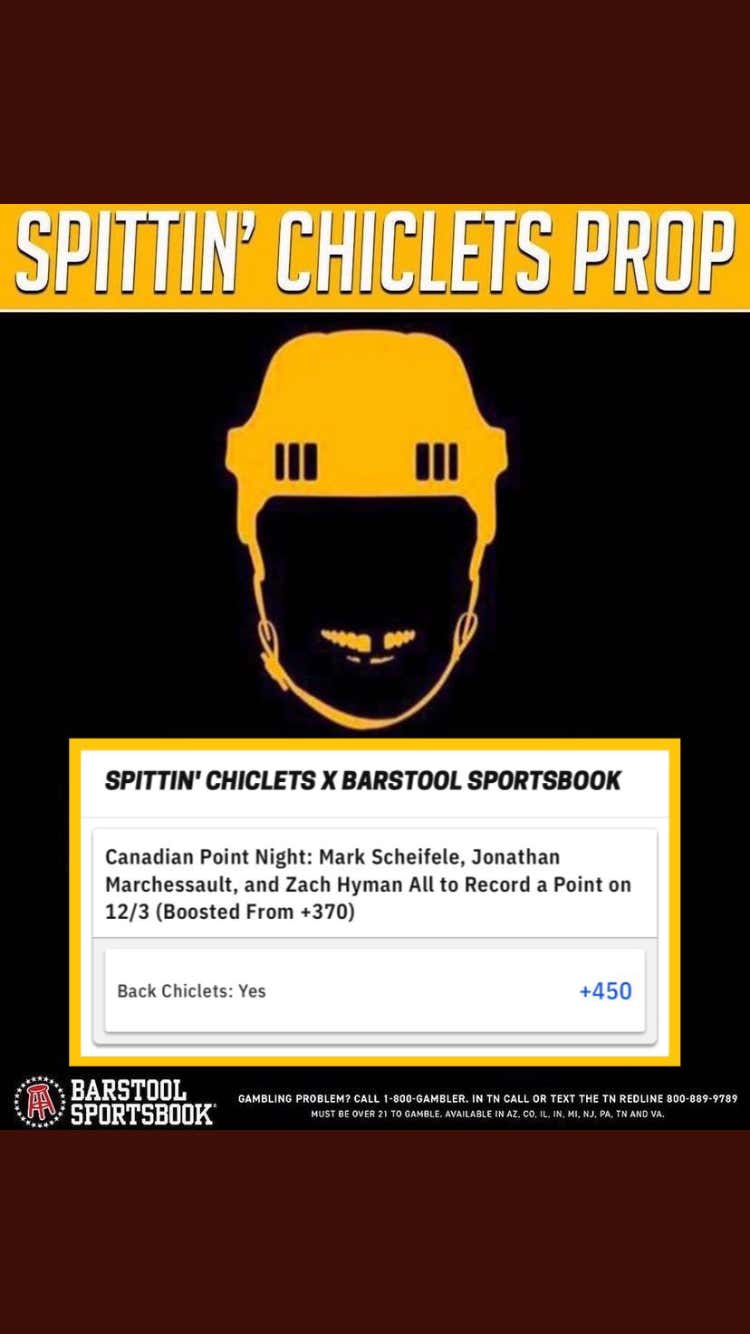 First up is the #1 center for the Jets.  As everyone knows by now I’m a big Jets guy and I expect them to make a run for the cup. The start of the season has been a mess, but things will turn soon.  Devils coming to town on a back-to-back is a dream for this team and when the Jets roll tonight, Scheifele picks up two helpers. If he doesn’t get on the sheet we know he will be pretty “Friggin” upset.

Second up is Jonathan Marchessault of the Vegas Golden Knights.  Vegas lost the other night to the Ducks in a game where Lehner couldn't stop a beach ball.  Vegas is getting healthy and will begin their ascent to the top of the standings tonight vs. Biz’s Coyotes. Vegas wins 6-2 and Marchessault will get himself into the game early by throwing the body around and then get on the score sheet to check the box for the boost!!

The third is Zach Hyman of the Edmonton Oilers.  Playing alongside Connor Mcdavid in recent games and with the way Mcjesus is playing, RA could pick up an apple each night.  Hyman had the hat trick last game but was called back to offsides. (so dumb, more on that at a later date) Mcdavid was trying to get him the empty net but couldn't, but know that 97 will make sure to get him one tonight when they dummy the Kraken 5-2.

Get over to Barstool Sportsbook under the Exclusives page and bet the boost with the Spittin Chiclets Crew.  Having action on all 3 games for one bet is awesome, but the best part about it is that for some crazy reason it doesn't allow us to all chirp Biz and Canada.