Source - This is the dramatic moment two surfers were chased by a huge shark as they frantically tried to race back to shore.

Heart-stopping footage shows the beast’s dorsal fin poking out of the water in Puerto Rico as choppy waves crash around it – just feet away from the pair.

Two people in the water can be seen desperately trying to swim away as the shark thrashes in the water close by at Middles Beach, Isabela. Surfer Rolando Montes can be seen making a panicked bid to paddle back to the safety of the beach while his pal also tries to get away on top of his board.

First of all, would it have killed The Post to add a little music? That video would've been ten times more dramatic if it wasn't a silent film. I'm not talking the Jaws soundtrack, just some sort of dramatic medley to add to the situation. Maybe a scream? I don't know. Regardless, I cannot think of a more terrifying situation than being in the water with a shark. That's why I never go out to where I can't touch the bottom- because the second you do you're dead. All it takes is one rip current and you're swept out to sea. Not to mention the wildlife. I mean god forbid that shark was hungry those guys would've been screwed. You can tell how big it was by it's fin too... 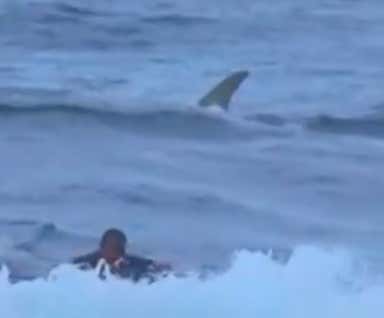 And as crazy as that video was, this little tidbit from the article is even crazier…

America has overtaken Australia for the number of attacks with Cape Cod, Massachusetts, now considered the shark capital of the world. Experts report seeing 50 in the popular holiday haven alone this summer.

However, despite a spike in maulings by the ferocious beasts and signs warning of attacks on beaches in the US and Australia, swimmers are still putting themselves at risk.

This year has seen 49 shark attacks – six being fatal – across the globe, as the underwater predators continue to get closer to humans.

The US recorded the largest number of shark bites, reporting 33 incidents, while Australia recorded 18.

America, specifically CAPE COD is now the shark attack capital of the world. Who knew? The chances of getting attacked are still low, but it's wild to think that you have a better chance of getting bit at Nauset Beach in Orleans than you do in Cape Town, South Africa. I guess I shouldn't be surprised. I went fishing with The Wonton Don on Pistol Pete Charters (highly recommend) over the summer and within 15 minutes of setting up with had a twelve foot blue shark on the line. Anyway, that's it for this one. Stay safe out there and have a great Thursday.