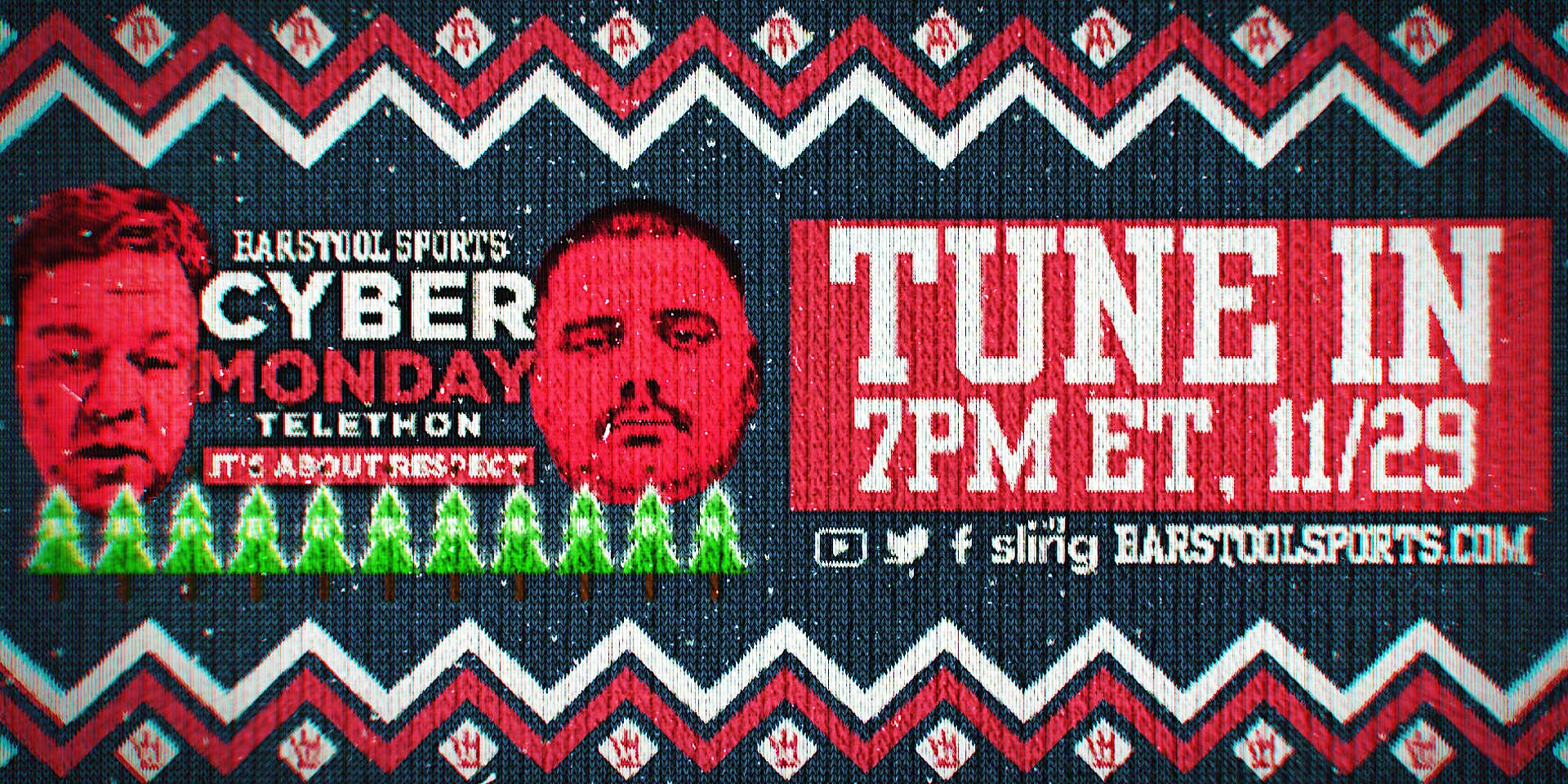 Tonight is our 6th annual Cyber Monday Telethon.  Everything at the Barstool store is 20% off all day and our livestream will start at 7 PM on YouTube, Twitter, Facebook, Sling, and the website.  In past years, I have been buried alive trying to sell merch. General Smitty almost got decapitated with a paintball gun.  Carrabis and White Sox Dave had a radar gun competition.  We locked a bunch of idiots in an escape room. But this Cyber Monday….. it's all about respect.

Before their Rough N' Rowdy fight next Friday, Jersey Jerry and Jeff Nadu will be facing off tonight.  Here's how it works.  At the start of the night, Jerry and Nadodadoo will privately predict how much money we'll sell in merch during the telethon tonight which will last about an hour.  Throughout the telethon we'll have a bunch of people presenting their merch and when they're done, they'll walk over to the dunk tank and add a disgusting ingredient of their choosing (anchovies, pigs feet, mayo, etc.).  Rico might try to put cyanide in.

When the telethon is over, the person with the closest guess wins and the loser goes in the dunk tank.  No Price is Right rules.  The amount of throws the winner gets depends on how much merch we sale. For every $15,000 sold, the winner gets a throw.  As a Ryder myself, I expect all fellow Ryders to step up tonight in a big way and put their money where their mouth is.  If Rico is a good leader, he should spend $100,000 himself.

As I said last week, this Black Friday/Cyber Monday is more important than ever.  The best way for us to fight back against the Henry Blodgets and Julia Blacks of the world is to control our own destiny by selling a shit ton of merch.  They don't cancel us.  We cancel them.  The more merch we sell, the more we can prove to our advertisers that the haters are just a small vocal minority group of losers who don't represent public opinion.  So grab a bat.

As you wait for the telethon to start, kill some time by buying merch. If you buy something today, you'll get the telethon number so you can call in tonight and talk to whoever you want.