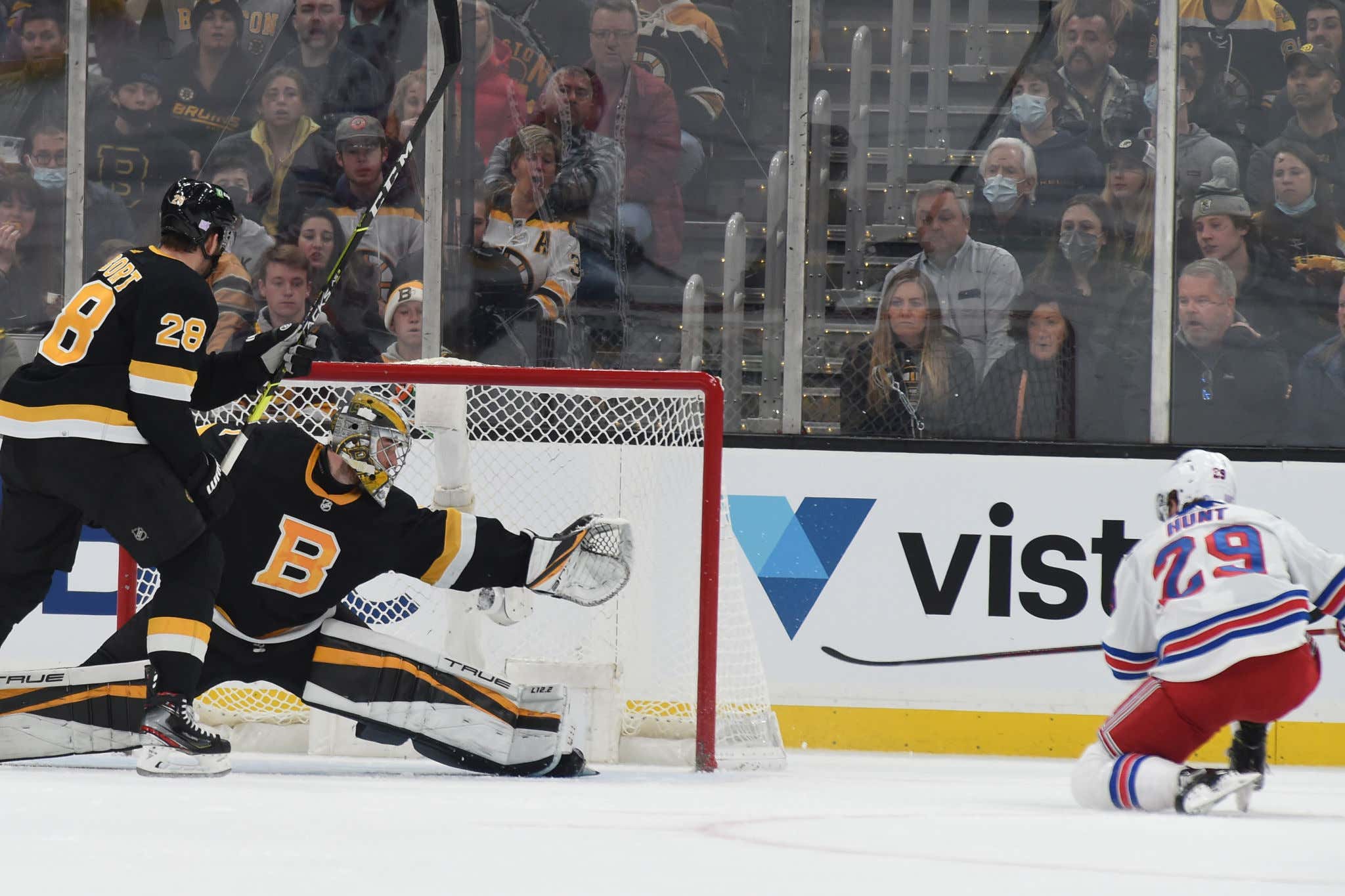 Despite a strong start, the B's absolutely fell apart to the New York Rangers on Friday afternoon. "Pissed it away" as Bruce Cassidy put it. Let's get into it.

With 5.8 seconds left in the 1st the Rangers tied it up on just their 4th SOG of the period. Ryan Strome. Brutal goal to give up for the Bruins. 1-1.

Bruins dominate the period yet come into the first intermission tied up.

Patrice Bergeron regained the lead for the Bruins, right off the draw Marchand found Grzelcyk who found Bergeron for the tap in. Nice set play. 2-1 Bruins.

With 7:27 left in the 2nd, Dryden Hunt tied the game. Jeremy Swayman kicked out Ryan Lindgren's shot but Hunt was the beneficiary of the rebound. 2-2.

With 8:25 left in the 3rd the Rangers took their first lead of the game. Artemi Panarin finishes the odd man rush. 3-2 Rangers.

The Rangers would add the ENG to make it 5-2.

- Tomas Nosek started the game centering Jake DeBrusk and Craig Smith. We've seen him up there a few games now, and they've looked pretty good. Smith opened the scoring with his 2nd of the year.

- After a dominating first period it's beyond frustrating to see the Rangers tie it up with 5.8 left in the period. Brutal.

- That set play off the face off that led to Patrice Bergeron's 8th of the year was a thing of beauty.

- Story of the game was the Rangers capitalizing on their odd man rushes and burying them. B's had plenty of scoring chances of their own but couldn't finish. B's came out strong but completely fell apart starting halfway through the 2nd.

- B's had three PP opportunities but couldn't cash those in either.

- Gotta give credit to Igor Sheshterkin for weathering the storm for the Rangers in the first, then was lights out in the last half of the game. Finished the night with 34 saves.

- Need more from Erik Haula. Was asleep on the Rangers game-tying goal in the 1st, already demoted to the 4th line with Lazar and Blidh. Might need a game or two on the 9th floor.

- Think it might be time to reunite Hall - Coyle - Smith.

- Jeremy Swayman got the third straight start in net (played vs. BUF because Ullmark tweaked something in morning skate Wednesday morning). Made 26 saves. We've talked about his rebound control before, and Dryden Hunt certainly go the better of him because of that on his goal. Despite that, Swayman looked solid. Insane paddle save on Zibanejad to keep it a 2-2 game in the 2nd. Not much he could do on those odd man rushes.

- Interesting tidbit from Sean McDonough during the game.. said he spoke with Tuukka Rask last night and that Rask will be skating multiple times a week soon, hoping to play as soon as January… and wants to return to Boston. B's can stash Jeremy Swayman back into the AHL without waivers if they add Rask into the mix. Lot of different factors at play though. It'll be interesting to see what the B's do.

- We are 17 games into the season and the B's have already worn their alternates 6 times. 3-3 on the year wearing them. Might be time to retire them for a bit.

- I'd pay good money to hear what was said during this exchange. Brad Marchand was mic'd during the game… leak it… ESPN you cowards.

- Speaking of ESPN/ABC… coverage was… not great today. Camera angles were bizarre and far away. Didn't mind the studio analysts but the actual game presentation was bad. TNT has been crushing it though.

The Jekyll & Hide Bruins continue. Beating the teams they are supposed to beat, but can't seem to beat teams that are in playoff position. They'll look to bounce back Sunday night when the Vancouver Canucks come to town.

Reminder - the entire Barstool Store is 20% off… grab your B's gear.  CLICK TO BUY