No I know you might be thinking, oh it's not that cool. Big guys can dunk. Sure. But what's awesome? That pass. That's right, we're here to appreciate the pass. Game-winning shots like Kris Jenkins are awesome and way more dramatic. But a *near* walk-off alley oop? That's as cool as it comes. Amazing what happens when Izzo lets Tyson Walker cook. Play him more, Tom. He's good, I promise. He's probably your best on ball defender and he can do things like this. Tie game, use the screen, come back for the re-screen and draw defenders before making the perfect pass? Yeah, that's why you play Tyson Walker.

That was an awesome game too. Michigan State got out to an early lead to the point where it looked like Loyola might not get 10 points the first half. Then they attacked and Izzo had some questionable lineups/schemes to take a lead. The second half was basically this though. Back and forth. Team would get up 3, other team would answer. It's what most would call a perfect noon game.

Malik Hall had a career game. Marcus Bingham had the game-winning dunk and was AWESOME defensively. The Battle 4 Atlantis has become the best Thanksgiving Tournament and it's going to live up to the hype this year. Michigan State, Loyola, Auburn, UConn, Syracuse, VCU and Baylor? Yeah, give me that every year. Hell, even Arizona State can keep showing up for the 8th team so we can see Bobby Hurley lose his mind.

Perfect pass by Tyson Walker there. Also just a ridiculous view of how much higher Bingham was than anyone. 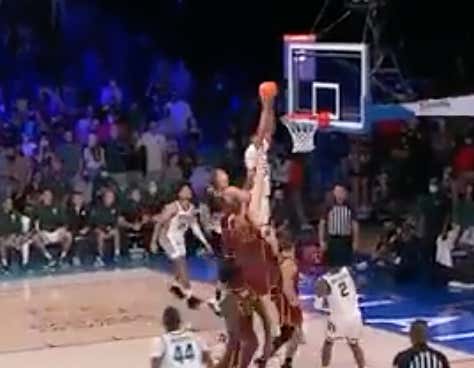