This one's making the rounds today and a lot of people are sending over and tagging me asking if this is me.

1- I didn't go to Boston College. I wasn't smart enough and my parents didn't have the money to pay my way in.

2- I'm actually headed to Philly for the holiday today to spend Thanksgiving with the in-laws. So I'll be going through Midway and Philly's wonderfully underrated airport. Not Logan.

3- I stopped getting tight fades from my barber once the gray hairs started showing up on the sides of my head and I couldn't stop them.

But it does come as no surprise I love a great cannoli. And I am a big Mike's guy. So I can see where the confusion came from.

But let's talk about Johnny College here and his technique.

1st off- if you aren't aware, Mike's has these travel boxes now where they'll give you the shells, the mascarpone, ricotta, and whipped cream filling in a sealed pastry bag, and the powdered sugar and pistachios in nice little baggies. That way you can mail them, or travel with them anywhere, and then make them fresh whenever you want.

You can also get them on Goldbelly and send them to anybody anywhere like my sister does for me on my birthday. (Amazing gift).

So this Johnny College kid's going home for Thanksgiving and like any stand-up son would do, he's bringing home a delicacy for his family that one can only find in the best Little Italy in America, Boston's North End.

Sure to be the hit of his family's Thanksgiving, probably in Indiana or Missouri somewhere, Johnny probably breezed through ID Check with a pep in his step.

That's until he got to the asshole who screams out "No laptops, liquids, or lithium batteries in your bags! Please remove your shoes and jackets and place in separate bins!" at the top of his lungs, non-stop on an endless loop.

(Sidebar- no offense to this guy if he's reading it. But how do their coworkers endure this for 8 hours every day? Does it just become static after a while and they drown it out? Like people who live next to train tracks? Or are they on the brink of committing a homicide around the clock?)

That guy saw the Mike's box and his mouth began salivating like Pavlov's dog.

"Sir no liquids of any form in containers over 3 oz's"

Then made Johnny untie his box as he pointed out the bag of cream filling and told him to dump it.

Johnny, being a brilliant Boston College Eagle and all, asked why it was ok to bring whole cannoli through security, to which the TSA agent had no answer.

So being the forward thinker that he is, Johnny got to work. Right there in front of the x-ray machine. 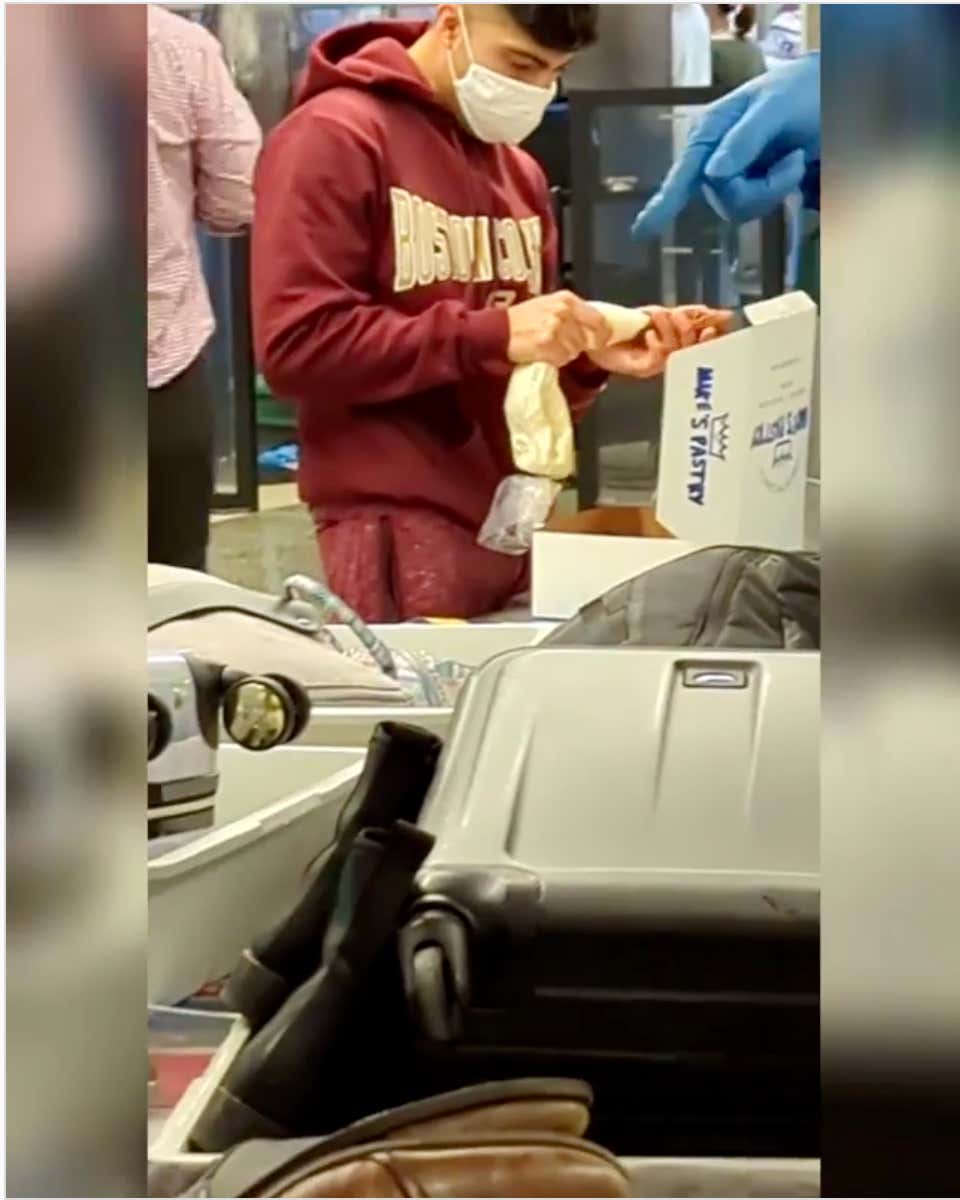 I give this form, given the circumstances and pressure he was under, a solid 9.1.

He's already halfway through the bag which means he's probably filled a good 6-8 shells, so he's comfortable here and in a groove.

The TSA Agents were probably looking on in awe, realizing they were witnessing greatness.

If I know Johnny like I think I do, he proudly squeezed the last out of that bag and offered the finished cannoli to the asshole narc TSA agent. Then he tied his box back up, marched to his gate, boarded his plane, flew to whichever flyover state his family is from, and walked in his front door with the prize.

And you know what? Those Goddamn cannoli are going to taste ten million times better tomorrow for dessert because they were made under pressure in the Logan Airport security check line.

Leave the suitcase, take the cannoli.

p.s. - best cannoli I have found in Chicago is from J.P. Graziano. No this is not an ad. It's the honest truth. I never bullshit when it comes to food. They are excellent.

p.p.s. - I'm all set with Mr. Portnoy's take on Mike's. No offense. Next time I need an old Jewish guy's opinion on Italian food, or cash only, 5-items or less grocery store check-out lines, I know where to go.

p.p.s. - I am a Mike's guy. Shoot me. You Modern Pastry people are psychos. It's ok to like Modern. It's ok to like Mike's. I grew up on Mike's. One of my uncles used to work there when he was a little kid so he went there and my family went there so I went there. I love their cannoli but I also love their pizzelle, lobster tails, and eclairs. And I am always amazed at how insanely fast their operation works and how quickly they move people through the line. Something Modern can't say. Sorry, I'm not sorry. You Boston people should just be grateful you have two phenomenal pastries across the street from each other you can argue about. Great problem to have.