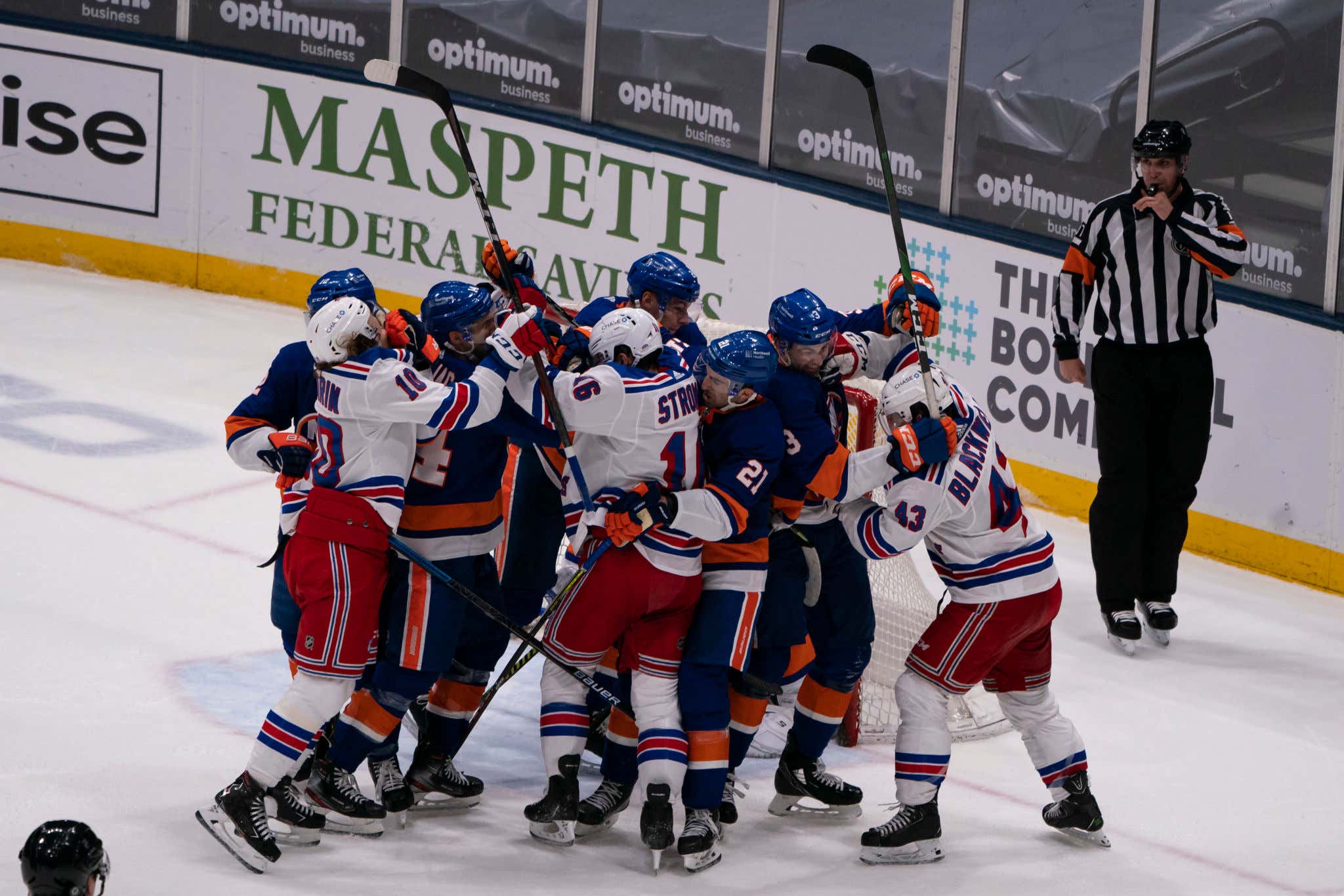 The New York hockey rivalry has not been kind to the Rangers. Not only have the Isles taken 20 of the last 28 tilts but they were largely responsible for the Blueshirts offseason pursuit of grit after dominating their final four crucial meetings last season. As if the combined 16-3 scoreboard wasn't enough, the Islanders physically manhandled them & exposed the Rangers Achilles heel. Gerard Gallant is at the helm now preaching straight ahead hockey and, while they'll miss Sammy "The Bull" Blais the rest of the way, they're piling up the points while trying to revamp their pushover reputation. Games against the Islanders were supposed to be a big measuring stick - but I don't even know who these Islanders are. Literally.

For as much as I'm getting a kick out of their 6-game losing streak to the tune of a combined 27-6 score I'm reasonable enough to admit they haven't exactly been set up for success to kick off 2021-22. It's no one else's fault though. A delay with their new arena forced the league to schedule 13 straight road trips to open the year. Ryan Pulock is shelved after blocking shots with his ankles. Covid has run rampant all over their roster and, as of their last game, has Bailey, Lee, Johnston, Pelech & Greene all sidelined. Just for good measure, Brock Nelson is out 2-4 weeks after getting rubbed out along the boards by Jake Muzzin & Big Z has just been added to the Rona list. So like I said, I LITERALLY don't know who the Islanders that have been/will be in their lineup are.

That doesn't mean tonight and Sunday (if they play) aren't just as important for the Rangers though. They may not be the measuring stick contests fans envisioned but they're now crucial division games essentially handed to them on a platter. The Isles have been conference finalists for two straight years. They're down early now and there's no reason to let them up off the mat. Rack up all the Metro points possible while digging a deeper hole for a hobbling Islanders squad that won't be hobbled forever. Regardless of who's donning their sweater, a rivalry matchup is the perfect recipe for a spiraling team to get up for. Not to mention the first time your rival visits your brand new yet winless stomping grounds. The Blueshirts must avoid the trap.

That shouldn't be too hard to do. They know what's at stake now. Sitting at 11-4-3 the Rangers have won games with a variety of formulas so far while their overall play improves along the way. They've stolen some, carried the play in others and just recently added a buzzer-beater. Their schedule wasn't exactly a picnic either, with 11 of their first 17 away from The Garden - not to mention their caliber of opponents. Four regulation losses have come at the hands of three teams currently ahead of the NYR, who are sitting a surprising 7th in the entire NHL in points. Caps have been rolling, Flames are neck and neck with the McDavids as the top team in the West and Toronto squeaked out a home win over the NYR that made it 10 of 11 for them. It's safe to say these current Isles are nowhere near that level. The Blueshirts have earned at least a point in every game they've scored at least a pair (11-0-3) while the Islanders have lost 6 in a row by at least three. These are rivals on polar opposite trajectories and it's up to the Rangers to keep it that way.

Kakko has arrived & that entire second line is rolling. Kreider can't stop scoring. They're getting offensive contributions from guys like Gauthier, Hunt, Lindgren, Trouba, Miller etc. Shesterkin has been an absolute wall against any team not from Calgary. There's simply no reason to let the NHL/AHL hybrid version of the New York Islanders do anything to stop this wagon from barreling through. Not now. These Rangers are just too damn good.