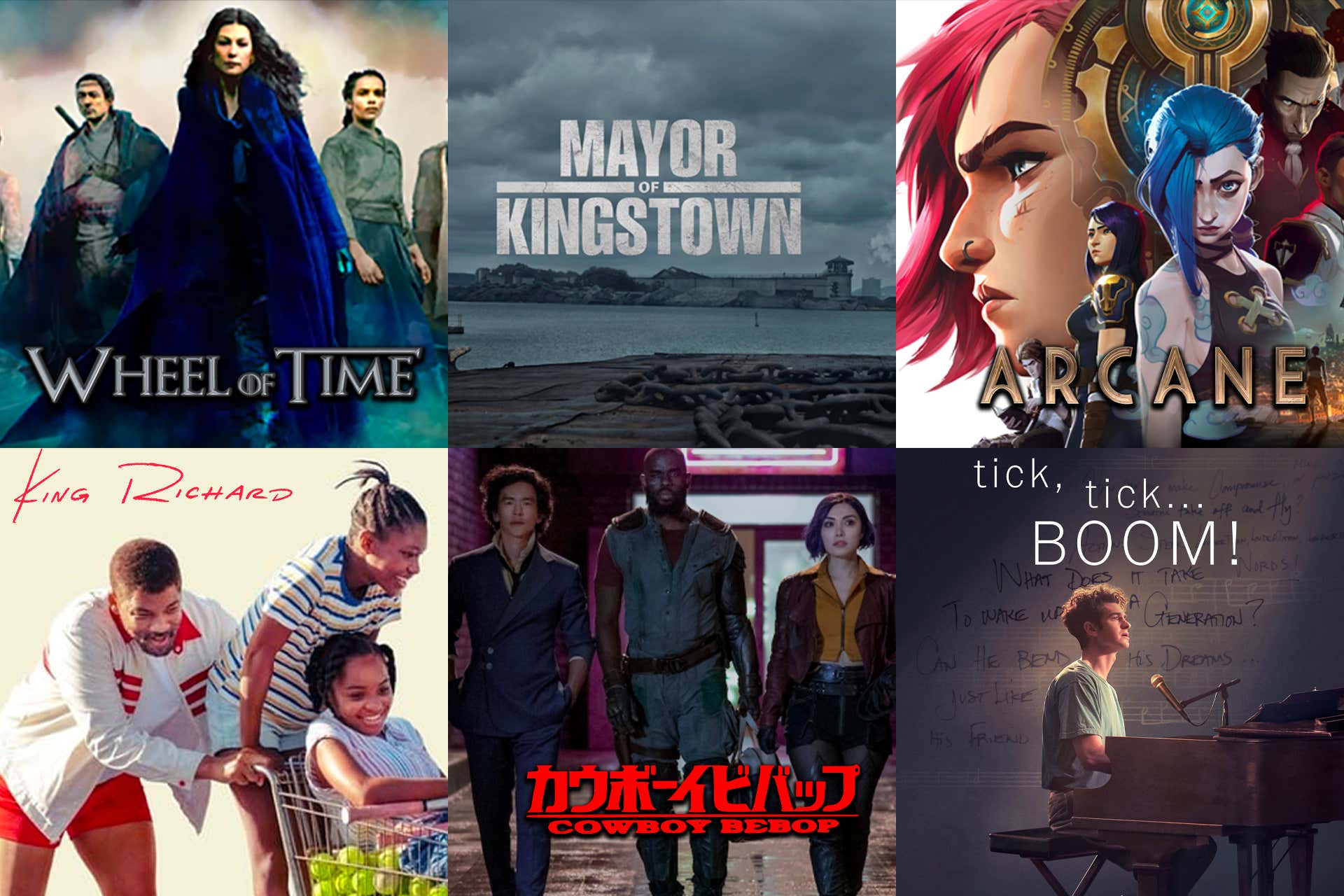 This past week, a whole ton of new shit hit streaming. Maybe the most in one single period then I can ever remember. So instead of breaking them all down into different blogs, I'm just going to put them all in one place. Enjoy!

The Wheel of Time(Prime Video)

The Wheel of Time follows Moiraine, a member of the Aes Sedai, a powerful organization of women who can use magic. She takes a group of four young people on a journey around the world, believing one of them might be the reincarnation of the Dragon, a powerful individual prophesied to either save the world or destroy it

The book series that this is based on is one of the biggest fantasy series ever made just from a pure numbers standpoint. I'm haven't read them yet but the way it was described to me was basically the original Game of Thrones. The first three episodes are out right now, and I haven't really connected with it. The lore of it interesting, and they definitely do well at basically presenting the tip of the iceberg with the promise of more. But so far, it feels very "Young Adult". Think 'Narnia', 'The Golden Compass', 'Divergent', 'Mortal Engines'. Personally, that feel is just not for me. I'll finish out the series to see where it can go, but i'm not happy with what's come out so far.

"Mayor of Kingstown follows the powerful McLusky family, power brokers in Kingstown, Michigan, where the business of incarceration is the only thriving industry. Tackling themes of systemic racism, corruption and inequality, the series provides a stark look at their attempt to bring order and justice to a town that has neither."

Anyone that knows me knows that I love Taylor Sheridan. He is the brilliant mind behind the Frontier Trilogy(Sicario, Hell or High Water & Wind River) & a master at the neo western genre. His other foray into television, 'Yellowstone', has been a huge success as well. His last few movies, though, have been less than great which definitely had me a bit worried. The first two episodes were OK at best. There were some good twists and turns, but it left me still wondering what exactly was going on. The last episode, though, was a big exclamation point and has me 100% in to see what is going on for the rest of the series. Renner is doing really well, and the usual cast of Sheridan extras are fantastic as well.

Amidst the escalating unrest between the advanced, utopian city of Piltover and the squalid, repressed undercity of Zaun, sisters Vi and Jinx find themselves on opposing sides of a war over twisted ideologies and arcane technology

This is an animated series that is set in the League of Legends universe. Personally, I don't know a ton about the lore of those games. I tried League for about 5 minutes, during which I got absolutely pulverized by incredibly good Korean players before I could figure out what was going on. This series, though, has been absolutely tremendous. I'm 5 episodes deep into the 9 episode season, and they do a great job at setting up the world, getting us invested in the characters and setting the stage for a bigger conflict.I thought that this wouldn't be for me because I usually hate this animation style, but I think it worked great for this show. This is definitely the best show to come out during this drop.

Based on the autobiographical musical by playwright Jonathan Larson. It's the story of an aspiring composer in New York City who is worried he made the wrong career choice, whilst navigating the pressures of love and friendship.

I'll tell you right now that this movie NOT built for 95% of the people reading this blog right now. It's a movie based on a play that is based on a man making a play. It's Lin-Manuel Miranda at his most Lin-Manuel. Inorganic, fantastical and stylized. If this is for you, let me tell you what to expect. Garfield is not a strong singer, but he does ok here and is supplemented well by the people on the cast who can. There are a bunch of Hamilton/In the Heights broadway alum as well as singers like Hudgens on the cast who do a solid job.

The backdrop and drama of the AIDS crisis and the personal issue of professional fulfillment bounce off each-other and it definitely makes you feel the hectic countdown that Jon is experiencing. My biggest knocks are that I didn't buy into the romance, and the movie looked quite bad. The CGI was very apparent when it was used, and the way it was edited together felt distracting.

Armed with a clear vision and a brazen, 78-page plan, Richard Williams is determined to write his two daughters, Venus and Serena, into history. Training on tennis courts in Compton, Calif., Richard shapes the girls' unyielding commitment and keen intuition. Together, the Williams family defies seemingly insurmountable odds and the prevailing expectations laid before them.

This was a fantastic movie. As someone who is not particularly tuned into Tennis at all, a lot of this was really fresh information to me which may play a factor. But learning about the origins of two of the most dominant athletes of all time was really cool, and the dramatic movie angle of it was awesome. Will Smith does a fantastic job showing both sides of Richard Williams, and this is honestly his best performance in a long time. And lemme tell you that he NEEDED that win bad. Look at his last decade: 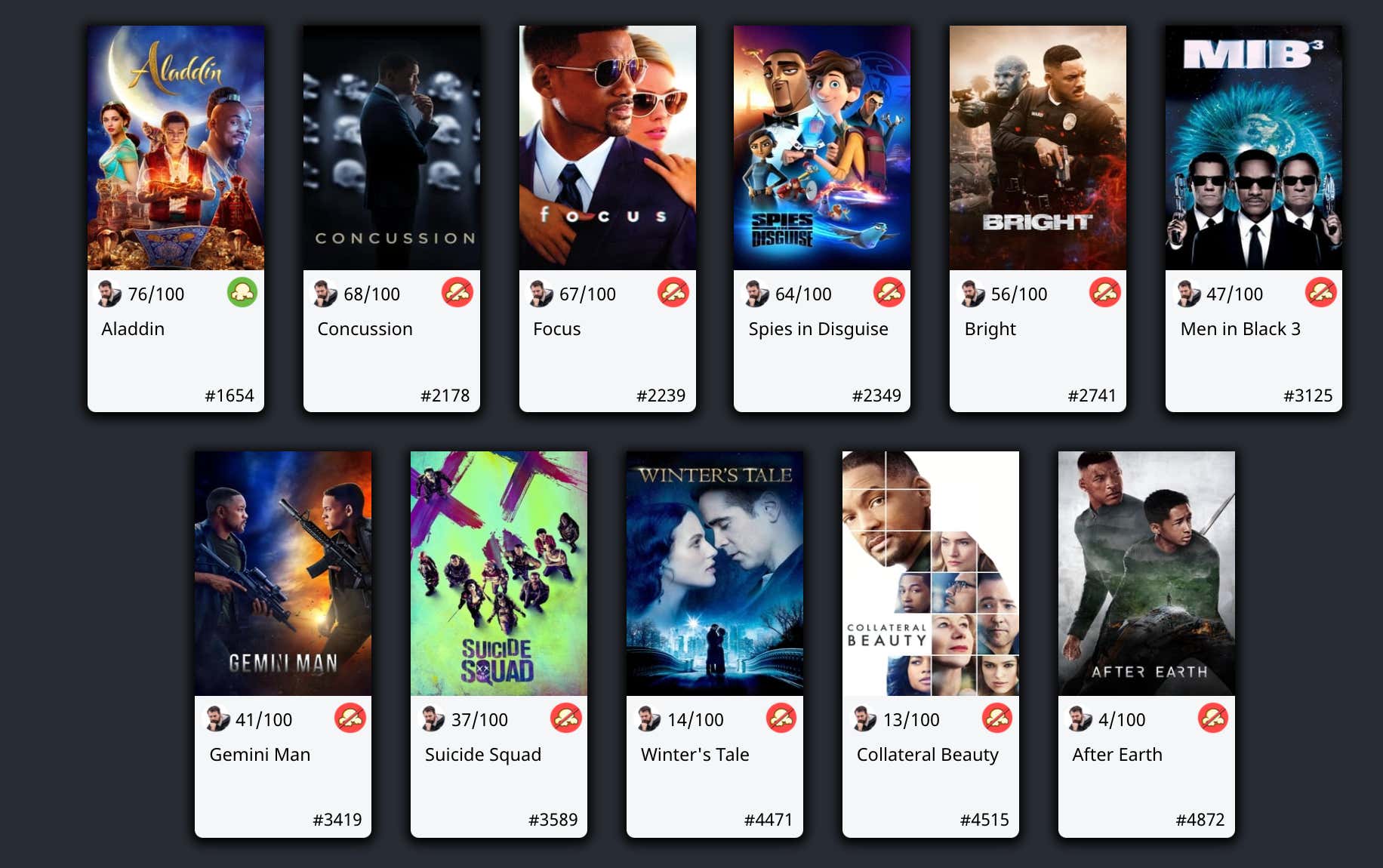 Woof! I do think that this movie should be taken with a grain of salt because there is for sure some creative liberties taken to make both Richard and the Williams family come off as good as possible. I assume that was a prerequisite to having their cooperation with it being made. Regardless, I think it is a fun and dramatic sports movie which fills a growing need in my cinematic heart.

This is the one earned a bigger blog which you can read here.