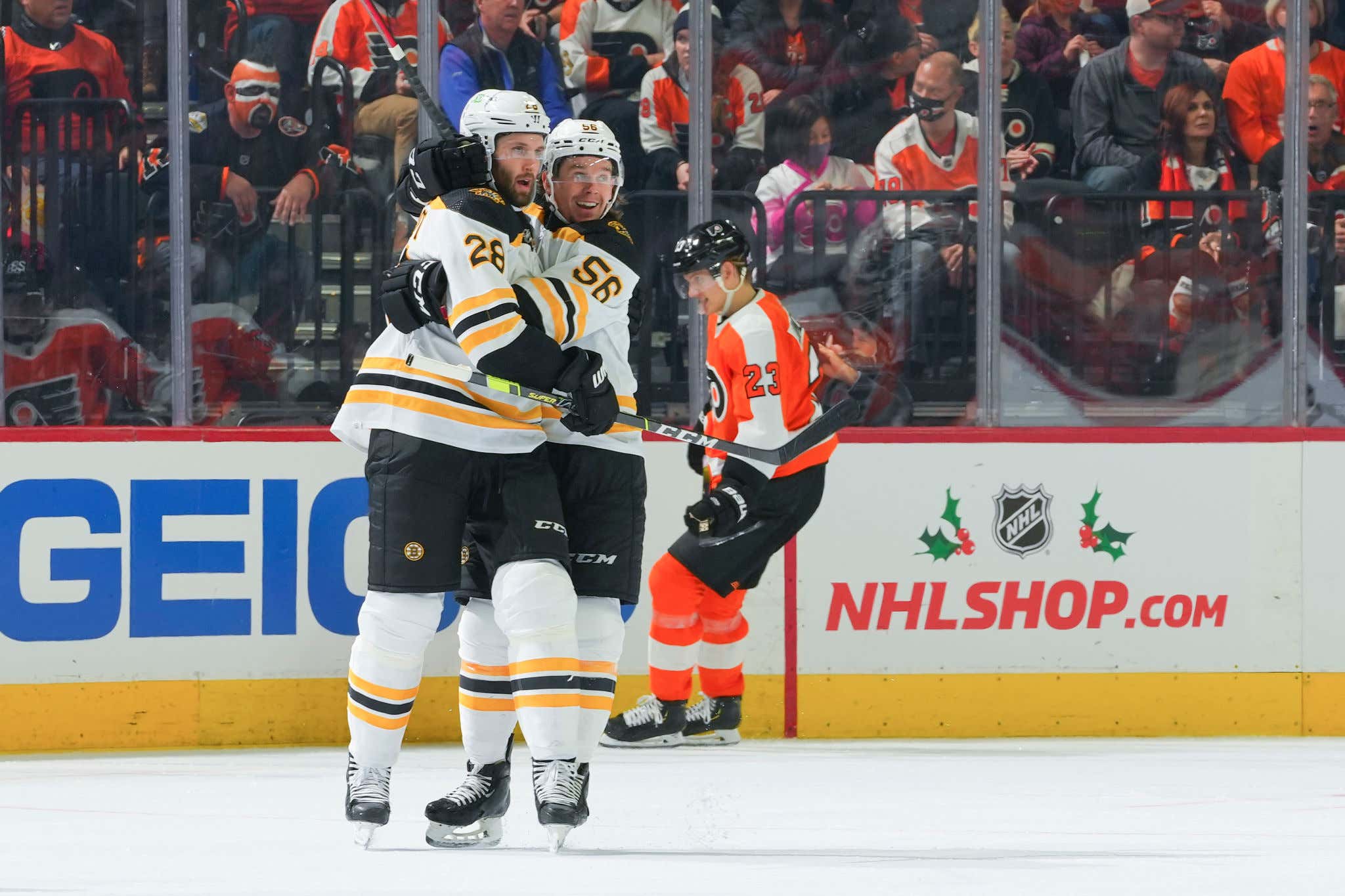 Make it three straight wins for the Boston Bruins. Derek Forbort scored TWICE and Linus Ullmark backstopped the B's to a 5-2 win in Philadelphia. LET'S GET INTO IT.

With 1:35 to go in the period the Bruins' 4th line broke through to open the scoring. Anton Blidh feeding Tomas Nosek who roofed a backhander. 1-0 Bruins.

Bruins open up the game with some jump despite playing not playing for 6 days, threw 21 shots on Martin Jones (vs. Philadelphia's 8). B's did have have 2 PP opportunities but nothing came of those.

Derick Brassard tied the game on the PP midway through the second (Brad Marchand was in the box for "unsportsmanlike conduct" after a scrum, soft call). 2-2. Tough break for Curtis Lazar who nearly had it.

It was Derek Forbort once again who regained the lead for the Bruins. Snipe city. 3-2 Bruins.

Less than 3 minutes into the 3rd Craig Smith ripped a corner to extend the Bruins' lead to 4-2.

After maybe the worst penalty call go against the Flyers (bench minor - delay of game at the dot, but Bergeron was the one to hit the puck out of the refs hands on the face off) to negate their PP, David Pastrnak made it 5-2 on the 4 on 4. Slick feed from Zboril.

- The B's 4th line opened the scoring, great shift, Lazar with the pressure and the hit, Blidh finding Nosek in front. I've been pretty impressed with Blidh since he's entered the lineup.

- Death, taxes, the Bruins conceding goals right after scoring them. Brassard answered 52 seconds after Forbort put the B's up 2-0 in the 2nd. Such a momentum killer. I'm sure Cassidy has and will continue to address the next shift going forward.

- Brad Marchand extended his points streak to 8 games with an assist tonight. He has 4 goals 9 assists (13 points) in that span.

- Charlie McAvoy has been doing it all for the B's this year.. got a few punches in early in his bout vs. Farabee. Terrier on Terrier crime.

- Derek Forbort has already doubled his career high (2) in goals scored with 4 in 14 games this season. 2 tonight. While he has his moments defensively, he's been a machine offensively. Derek Fourbort amirite (I'll see myself out). Tonight was his first multi-goal game of his career.

- Craig Smith returned for the B's after missing another couple of games due to injury. Smith got on the board with his first of the season in the 3rd period. Nice to see him return and finally get rewarded. Finished the night with a goal and an assist. Jake DeBrusk quietly had himself a two point night as well (2A).

- 11 different players recorded a point tonight for the B's, nice to see that secondary scoring come through.

- Jakub Zboril made his third straight start on defense. Mike Reilly slide back into the lineup, Connor Clifton was healthy scratched. Zboril picked up an assist on Pastrnak's 5th of the year. Certainly has made an impression on this lineup, most comfortable he's looked with the varsity squad.

- Gong show night for the refs. Good god. Some tough calls but the Flyers got absolutely screwed over that "bench minor" delay of game at the dot.

- Linus Ullmark made the start tonight. Bruce Cassidy alluded to Jeremy Swayman being a little bit ahead of Ullmark so far this season. Nonetheless, Ullmark was solid in net, making 29 of 31 saves. Swayman starts tomorrow night but good to see Ullmark get the win tonight.

B's head back home to take on the Calgary Flames Sunday night in Boston. Time to keep it rolling.