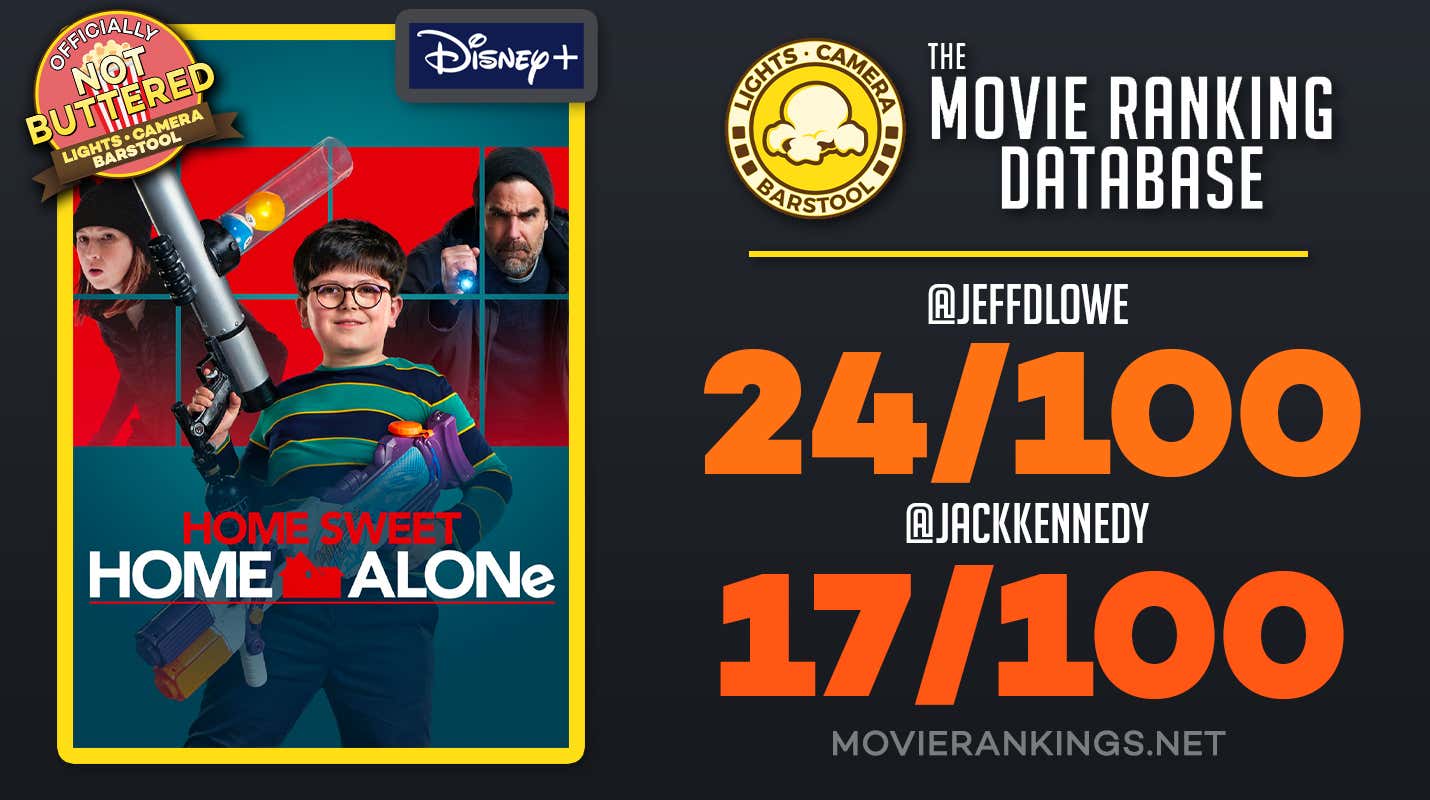 They made a sixth Home Alone movie… it stinks.

Max Mercer, a mischievous and resourceful young boy, has been left behind while his family is in Japan for the holidays. So when a married couple attempting to retrieve a priceless heirloom sets their sights on the Mercer family's home, it is up to Max to protect it from the trespassers, and he will do whatever it takes to keep them out. The reboot promises hilarious hijinks of epic proportions, and despite the absolute chaos, Max eventually comes to realize that there really is no place like home sweet home. (via IMDb)

JeffDLowe (24/100): The newest movie in the Home Alone franchise can't quite figure out if it is a reboot, remake, or a sequel. But one thing is for sure with 'Home Sweet Home Alone': the bizarre combination of a kids movie and nostalgia play completely misses the mark on the charm and heart that made the original movies such classics.

- Rating and reviewing a kids movie is hard because you need the right mindset
-- To not factor in the intended audience is a disservice to reviewing movies, in my opinion
-- With that said, looking at this movie from the viewpoint of a kid, I can't see how this is enjoyable?
-- There are so many references and moments that callback to the originals
-- Will that really resonate with kids? Will they know? Will they care?
-- Beyond that, the stunts and heist moments are sort of fun, but they feel rushes and ingenuine
- They lift literal lines from the original movie, and it just doesn't really work
-- This is why I say the movie doesn't know exactly what it is, in terms of a reboot, remake, or sequel
- The use of the John Williams original score is appalling…
-- They place it in moments it doesn't belong, and it completely throws off the vibe of the movie
- There isn't a performance in the movie that stands out or makes me laugh all that much
-- Are the bandits the protagonists? Are we supposed to like the kid who is sort of an asshole?
- My biggest issue with the movie is that it just doesn't carry a message, or reason to exist
-- I do NOT care about sequels or remakes, make 1,000 more if you have to!
-- But at least give the new movies a reason to exist
-- The movie ends and you're just left standing there wondering what the point of it all was…

Sigh. I hate doing reviews like this because I then look like an old man yelling at the clouds, but I promise that I gave this movie a real chance. There is no reason a 30-year-old sequel can't exist and be good, and I hope they give it another go, but the way they put this movie together just didn't land in any way, shape, or form.

KenJac (17/100): When I first heard that they were making a new Home Alone, it was a bit of a rollercoaster. At first read, I let out a huge groan. Every Home Alone after 2 (there were 3 more after that, in case you didn’t know) were big-time garbagio. Then, they cast Rob Delaney, Ellie Kemper, Archie Yates, Pete Holmes, and more. All of them are names that I really like! Delaney and Kemper have been hilarious in their respective sitcoms, Archie Yates killed Jojo Rabbit, and Pete Holmes is Pete Holmes! That’s a very solid crew! Then, they announced that the director of Borat was directing this. What the fuck? Well, this rollercoaster ended up being one of those bored, late-game builds you make in Rollercoaster Tycoon where you send 400 people off a cliff and into the dirt.

On the acting side, I don’t think there is a ton to say. Both Delaney and Kemper are fine, but this movie does nothing to highlight their talents. Yates is easily the highlight of the movie, but this movie isn’t really about him(more about that later). Some of the other names, Holmes, Timothy Simons, Kenan Thompson, Andy Daly, and Chris Parnell are not really part of this movie.

This movie sort of subverts the expectation of Home Alone. Instead of being solely about the kid and his battle vs bad guys, this movie is basically about the bad guys. Or should we say, the not-so-bad guys? It follows the fake wet bandits as they try to steal back a family heirloom that they thought the kid stole, finding the meaning of Christmas along the way. Look, that is just not what people watch these movies for. Save three-dimensional characters for the grown-up movies. These need good guys and bad guys. Nothing more, nothing less.

There are two things that really bother me about this movie.

It is an extremely frustrating movie that bothered me as an adult. However, kids may still love the hell out of it and that is who the movie is meant for.

--
The movie is Officially Not Buttered, as it is not great! You can head to Lights Camera Barstool right here to listen to our latest episode where we will discuss it on our new episode.