There's an interesting theory that sums up the time we're living in that I think I have to credit to Adam Carolla. But whomever came up with it, it's one of the most accurate descriptions of the zeitgeist we find ourselves in.

And it is this. That for what is probably the first time in human history, the very wealthy are not expressing their wealth in how they look. Their status is no longer in their appearance or the clothes and jewelry they wear. And I don't think it's ever been like that before. If you watch old movies or, say, Three Stooges episodes, you can tell who the rich snobs are right away because they're wearing tuxedos and gowns and long strings of pearls, even around the house. Whereas the domestic help are all wearing uniforms that tell the world "This person only works here, doing all the menial tasks that are beneath us. But if you look at the uber-wealthy today, they intentionally dress down. It's Mark Zuckerberg in cargo shorts and a pocket tee and flip flops. Their lack of an appearance is the new status symbol.

Which brings me to the sartorial splendor we see out of Bill Belichick on an almost weekly basis. I get asked a lot why anyone would present himself to the world through a bank of network TV cameras looking like he did walking into the stadium in Carolina. Or like this: 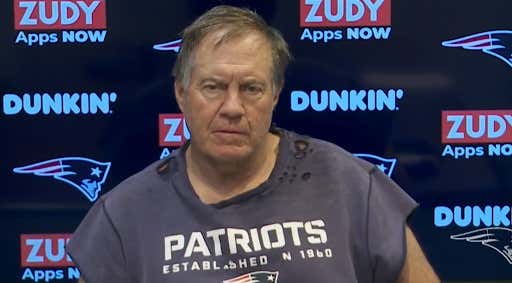 And the answer is here:

CBS Boston -  The Patriots have always been tight-lipped about Bill Belichick’s salary, but it is no secret that he has a pretty big figure on his paystubs. We now know that Belichick is not just the highest-earning coach in the NFL, but that the hooded one is the highest-paid coach in all of U.S. sports.

That comes thanks to a new list by Sportico. Kurt Badenhausen published a list of the Highest-Paid Coaches In U.S. Sports on Wednesday, and Belichick is above everyone else in the world of sports coaching. According to the list, Belichick is earning an average annual salary of $18 million.

“Belichick’s 31 playoff wins are 11 more than any other NFL head coach,” Badenhausen writes in his blurb about Belichick. “He trails Don Shula by 42 for most regular season wins.” …

That explains everything. Belichick is a man who can clean up with the best of them. But he saves it for rare formal occasions like Bon Jovi's Rock 'n Roll Hall of Fame induction, the Kentucky Derby or appearing on NFL Network's "Top 100" show. Other than than that, he's a man of his times. If Jeff Bezos is going to dress like a homeless person, Belichick is going to roll into a stadium looking like an unmade bed. Because that is how power is projected now.

As far as this report, I can't definitively say that $18 million figure is accurate. Neither Belichick nor Mr. Kraft, whose name is on the front of the checks (I'm assuming he doesn't have direct deposit, and is carrying a paystub good for $1.5 million to the bank every month), have ever uttered a word about their arrangement. So I have no reason to think they broke a 20 year silence to talk to this Badhouse guy, or whatever his name is. What I will say is that, if this is all he's getting, it's the steal of the millennium. Assuming the numbers are accurate (which I am not), that $18 mil is only 28.5% higher than what Carroll and Payton get, who combined have 33% of his Super Bowls. Or 25%, if you count the two he earned with the Giants.

If anything, he and RKK should have one of those deals like Red Auerbach had with Bill Russell, that whatever Wilt Chamberlain got, Russell would get $1 more. Only in this case, whatever the second highest paid coach gets? Double it.

But that's neither here nor there. The GOAT of coaching doesn't do it for the money. He's not worried about adding to his bank account. He does what he does so that he can add to the pyramid of his enemies' skulls he looks down upon the world from. And passing Don Shula  with a completely rebuilt team and winning more championships with the new quarterback he drafted and developed will be a reward worth more than all the riches in the world. Then he can REALLY start to dress down.

Kiss the rings. And the dollars.