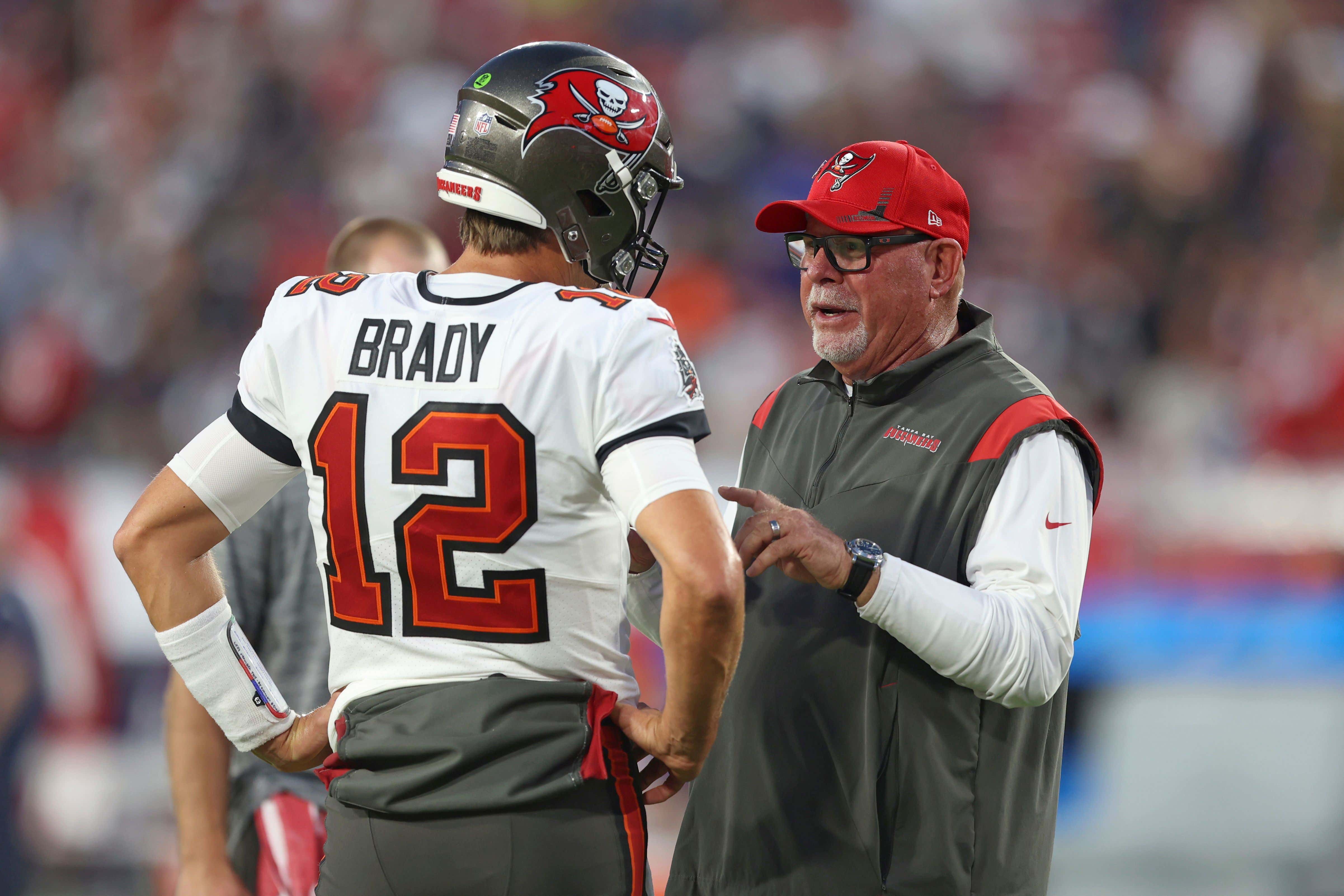 This is one of those rare and brief moments in time where you can actually feel a bit bad for Tom Brady. He's coming off his second loss in a row. The first of which was a tough one against his top divisional rival where he had the ball in his hands needing just a field goal to win - child's play, in his case - and he threw a Pick-6 instead. Then this week his team loses to a Washington team that came in 2-6. He's thrown four interceptions in those two games. And thanks to a bye week in between, he'll go almost a full month between wins, assuming he beats the Giants Monday night.

But it's even easier to feel back for Bruce Arians. Even coming off a championship, he still hasn't fully gotten a handle on his role as a head of state. Specifically, a figurehead. Like the Queen of England, he no longer has any real power. Brady enacted his own Magna Carta in September of last year, and like the Prime Minister, meets with Her Royal Majesty once a week to discuss the affairs of state. But it's nothing more than a formality at this point. A courtesy, out of respect for the traditions of the office. Beyond that, it's all waving to crowds and having your face on the money.

And like I said, Coach McFriendly is still figuring out what's expected of him. What sorts of messages he's supposed to deliver to his subjects. Which means occasionally, he'll break protocol. And despite his just being a symbol of power, every utterance of his is still capable of causing a crisis. Which is what has happened this week.

Pro Football Talk - After Sunday’s surprising loss to Washington, Buccaneers coach Bruce Arians blamed quarterback Tom Brady for both of his interceptions, even though one resulted from a hit applied to receiver Jaelon Darden.

On Monday, Arians began to backpedal.

That’s not how the Arians press conference unfolded after the loss. Arians was asked this specific question: “It’s the second straight week that Brady’s had multiple interceptions. Can you just speak to what was going on maybe with the receivers and his performance?”

“No, it had nothing to do with the receivers, it was him,” Arians said.

What really chaps me is not so much that Arians is biting the hand that has fed him. It's that people want to give him credit for having the balls to call out the guy he owes his success to, because that's what Bill Belichick used to do:

Stop me if you've heard this before, but "Wrong, Shannon and Skip." The opposite, in fact.

Yes, Belichick is notorious for his willingness to drag anyone of his players. Brady in particular. The stories about him saying, "I could get the kid from Foxboro High School to come in here and make that throw" while watching film in team meetings are as legendary as the videos of him in practice yelling "Run it again, BRADY!" Hell, Gisele herself has been quoted as expressing her contempt for Belichick making with the "Johnny Foxboro" wisecracks.

But name me one time Belichick ever called Brady out in public. That he ever stood behind a podium addressing the world and told us something was his quarterback's fault instead of putting the failure squarely on his own shoulders.

The most commonly cited example is the legendary Mona Lisa Vito press conference, where he was asked how Brady prefers his game balls prepared, and he said they'll have to ask Brady, because he didn't know. Which has always been spun as if he said something sinister. Like "Go and ask him! I've got nothing to do with this!!!" When all he did was calmly state the fact a head coach is not involved in prepping footballs to his quarterback's liking. Bill Walsh met with Stanford mathematicians to use trigonometry in order to devise a way to get maximum yards out of the minimum throwing distances possible. But I can promise you he never spent five minutes of his career thinking about how Joe Montana likes to grip the laces. So that Deflategate example doesn't cut it.

Let me save you the trouble. He never did. Belichick never once stood at a mic and declared Brady at fault for anything. In private? Yes. All the time. That's coaching. And it had the effect of putting everyone on his roster, old or new, on notice that everyone will be treated the same. Regardless of how you got on the roster, how much money you make or how many rings you have. That sacred cows make the best burgers. But just pointing fingers at press conferences is counterproductive. Worse, interception-shaming your QB just absolves the coach of any complicity. Which is why a way more successful coach than this fraud Arians always begins with "We need to coach it better."

If you're going to accept the credit when you get carried to a Super Bowl title by a guy, the least you can do is accept the blame when things go wrong. The Patriots certainly didn't borrow any of his ideas for their offense, and they never treated the GOAT in this kind of a shoddy manner. He's a hack who doesn't deserve what he has.