N.C. Highway Patrol spokesman Sgt. Christopher Knox told the News & Observer that Savarino was stopped for a stop sign violation while driving on Brushy Creek Road outside Hillsborough. The officer observed signs of impairment and Savarino was taken into custody. A breathalyzer test showed a blood alcohol content of .08. He was charged with DWI, driving after consuming alcohol under the age of 21 and the stop sign violation. Banchero was charged with aiding and abetting DWI and released at the site of the traffic stop. Aiding and abetting a DWI in North Carolina can be charged when a person knowingly turns over their own vehicle to someone who is impaired or fails to prevent an impaired person from getting behind the wheel.

How will Coach K spin this? Not only is it one of his players, this is his grandson. I can already picture him saying it's a family matter and they'll take care of it in house after the authorities get back to him. No doubt he's already on the phone negotiating with the head of the police. But the real question here is how the hell do you still get a DUI as a college athlete? Just use Uber. Shit, you play for Duke. Convince some sober freshman to come pick you up. You're also at Duke. No doubt in my mind that they have a list of people they can call for matters like this. Call someone and have them pick you up. I don't feel bad for K's grandson here. You're 20 years old and driving after allegedly drinking. Just dumb as shit.

Big Cat brings up a good point here though.

The man has made a living out of spin zoning things - or just straight up lying like he did with Dillon Brooks. He's gonna be on his toes tonight after a game. Speaking of which, Paolo put out this Instagram story. 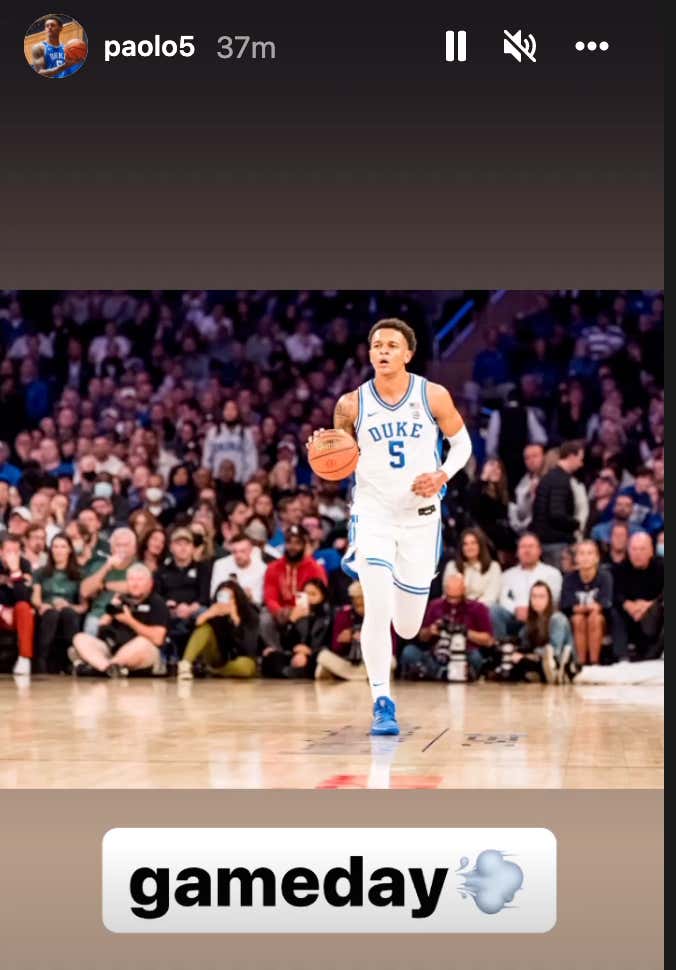 We sure he's playing? I have no idea what aiding and abetting a DWI is. I googled it and saw some law firms explain it - apparently it's a North Carolina thing? Here's one explanation from a law firm.

To be found guilty of aiding and abetting, a jury must find

What acts constitute aiding and abetting a dwi in North Carolina?  There is not much recent case law on this point.  Looking at some of the older cases dealing with this issue, it is clear that an owner who hands over the keys to his car to a person he knows to be impaired and then proceeds to ride as a passenger with the impaired driver is guilty of aiding and abetting DWI.

Did Paolo make K's grandson drive? I have no idea, but that's what it reads like. How does this even come up? Feel like K's grandson needs to just take the heat here and say Paolo had no idea. You're talking about one of the best players in the sport here. Paolo was charged with it though, so you gotta assume he misses tonight or the game later this week and come back next week for Gonzaga.

PS: This tweet from Youngstown Bob was perfect. One of the funniest tweets I've seen.